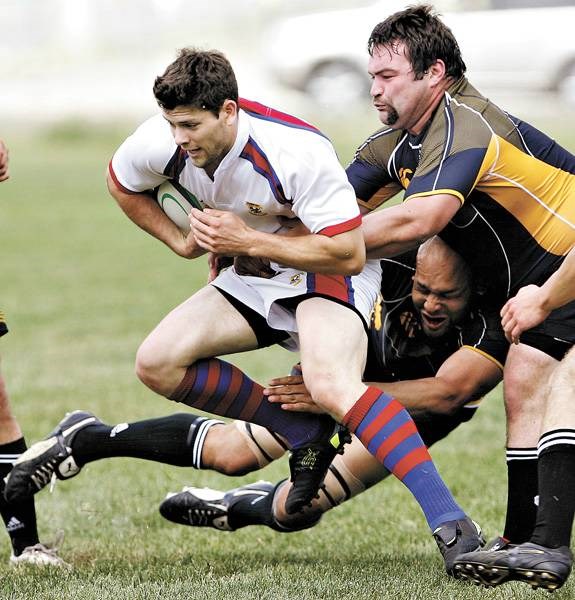 St. Albert played only as hard as it had to Saturday to remain undefeated in Alberta Cup rugby.

The team to beat in the men’s first division cruised to victory over the Calgary Hornets after opening the scoring with 27 unanswered points at the St. Albert Rugby Football Club.

“For once we came out and played very well from the first kickoff,” hooker Callum Wilson said after the 27-17 decision. “We actually played 60 minutes really well, but in the last 20 we’re a little disappointed we went away from our game plan. It was 27-5 at one stage and if we had kept mentally in the game for the last 20 it probably would’ve been 35-5.”

The win was the seventh in a row for the runaway leaders in the premier table.

With five games remaining, the 2008 provincial finalists are a lock to finish first for the second year in a row after capturing the provincial second division crown in 2007. A top two finish guarantees home field advantage in the Aug. 29 semifinals. The final is Sept. 12 at Ellerslie Rugby Park.

St. Albert stung the Hornets for 20 points in the opening 40 minutes on tries by Matt Herod (seventh minute), Domink Jenni (12th) and Byron Elliott (32nd) and five kicking points by Aaron Takel. He converted Jenni’s score and ended the first half with a short, straight-ahead penalty kick.

Jenni, a mountain of a man with nimble feet, had a big game in the back row. He was one of several players to touch the ball in support before Herod finished the play off with a quick burst into the try area. Jenni also converted a blocked kick deep in Calgary’s end into points. The high school product of the Paul Kane Blues was replaced by Kyle Gilmour, the team’s MVP award winner last year, early in the second half and the firsts ahead by 20. Gilmour was coming off an upper body injury from the 51-0 whipping of the Calgary Saracens the week before.

The lanky Elliott, a dominating eight-man and the team’s best player after seven games, needed only a few strides before breaking the try line on his score.

Adam Bontus and Karim Lynch made huge plays defensively when the Hornets managed to break into St. Albert’s end in the first half. Takel, David Owen (back in the line-up after missing two games with a bum shoulder) and Jake Robinson also rattled off clutch kicks for touch to keep the Hornets pinned in their end.

Takel would later convert Lynch’s try 14 minutes into the second half. The former Druid is gradually rounding into form as the team’s go-to kicker.

The Hornets closed out the loss with three tries and a conversion in the last 23 minutes.

“They chip away and try and get at you mentally. They’re a reasonably physical team too, but this year we’re more physical ourselves and we can do a lot what they do,” Wilson said. “I don’t think we’ll be worrying about the Hornets next time.”

“We can play a more physical, tight game now with the personnel we have and with the experience that we’ve gained,” said Wilson, who was solid as a rock in the scrums and rucks after missing the Saracens match with a wonky knee. “We’re also a lot deeper and that’s huge when you can sit out a quality player and another guy can slot in and you don’t notice as much. That’s something perhaps we couldn’t have done in some positions last year.”

After the firsts were denied a provincial championship by the Calgary Saints in the final last September, Wilson returned home and opted to sit out his club season in preparation for a full campaign of premier at St. Albert. The pride of Timaru, a rugby hotbed in the province of Canterbury, arrived three games into the 2008 fixtures and quickly carved out his niche on the pitch while serving as the St. Albert U18 coach. This year he is acting as the club’s youth development officer.

“I thought it would be better to build up with the guys here than playing back home so I just trained hard in New Zealand before I came over,” said Wilson, who celebrates his 26th birthday today.