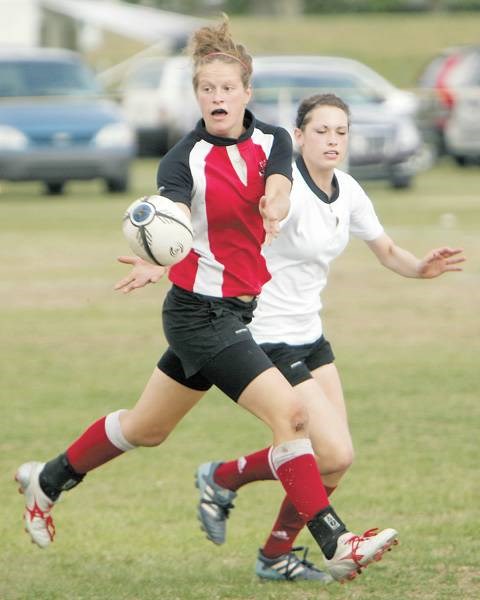 “We’re just so shocked we made it this far with a rookie team mostly,” said Jo-ann Selman, a Grade 11 standout with the Sturgeon Spirits, after Saturday’s 20-0 victory over the Bev Facey Falcons in the tier I (4A schools) third-place playoff.

It was the best showing by the lady Spirits at provincials after finishing sixth at the inaugural 2006 event in Edmonton and placing fourth in 2007 in Calgary.

“A bronze medal is nothing to be ashamed of, even if the girls had their sights set on something a little higher. I guess that’s what happens when your leaders are strong and well motivated. The high class of girls that they are off the field is what made them good on the field,” said head coach Ian Elm.

He was popping buttons during Saturday’s post-game medal ceremony.

&#147;I&#146;m very proud the girls made it as far as they did, especially considering the injuries and the youth of the team. They had what it takes to make it to a gold medal game but had troubles putting it together when it counted and that is to be expected with such a young team [with 15 new players].&#148;

The only loss of the season for the metro Edmonton premier champions was Friday’s 10-3 decision against Strathcona to complete the pool A round robin draw. The result dropped Sturgeon into the bronze match. Strathcona advanced to the final, only to get smoked 50-0 by Raymond.

“It was a pretty tough loss,” Selman said. “Everything they did was really good.”

In the middle of the first half the Spirits lost the services of Tamara Zembal, their co-captain and valuable scrum-half, with a broken left collarbone.

It was a scoreless stalemate with the Edmonton public league champions when Zembal was caught up in a ruck after making a tackle.

“She fell on me and I think another girl fell on my shoulder and that’s when I heard a crack. I rolled out and I screamed because it really hurt,” said Zembal, who played the role of cheerleader Saturday with her arm in a sling.

Terren Hargreaves, a jumper in the lineouts, did an admirable job filling in for Zembal in such an important role under difficult circumstances.

In the second half Strathcona opened and closed the scoring.

“We held our own but when they scored, we lost a little hope,” said Selman, who kicked a penalty for Sturgeon’s points. “When we got those three points, we were like, ‘OK, we can take this team. We can do it.’ We really tried but in the end we just couldn’t do it.”

Zembal, 17, refused to leave the game for medical treatment until the final whistle blew.

“They almost did it. They just had a couple of unlucky chances,” said the third-year Spirit. “It was a pretty good game. There were a bunch of mistakes but Strathcona was very good. They were fast.”

“They scored on the two opportunities they had and we scored on only one of the three that we had,” he said. “Overall it was a great game.”

With a bronze medal at stake instead of gold, the Spirits had a tough time putting the disappointing loss behind them.

“Everyone was nervous,” Selman said. “At first you could tell we were a little lost and then we gradually got through it.”

Kassandra Derudder opened the scoring against Facey in the eighth minute. The ball changed hands several times before she finished the play off with a sizable run.

A few minutes later, Selman almost busted loose with a thunderous romp down the touchline.

Sturgeon came close to scoring again, when Cortney Prins was tackled out of bounds a metre short of the try line. The Spirits kept pressuring Facey’s defence and eventually pushed the ball into the try area with mighty forward drive. Brie Gray was credited with the score.

Selman scored Sturgeon’s fourth try with a tremendous individual effort. After some quick passes sprung her into open space, she barrelled through a pair of defenders then bounced off a stunned Facey player near the 22-metre line before barging into the try area.

In the second half Selman had a try called back because of an error by the touch judge.

The shutout was the third in three games against Facey this year. The previous margins of victory were by 27 points in league play and by 44 in the premier final.

“It was our last game of the season and the girls played their hearts out,” Zembal said.

The Spirits kicked off six-team provincials with a sluggish 10-7 win over Notre Dame of Red Deer. Hannah Prokop and Tamara Farmer scored tries.

“We played strong but we could’ve definitely pounded it in there a little further for more scores. We were in their end for the majority of the game,” Zembal said,

&#147;It was good competition. In our league we did really well [five shutouts in seven games] and we got kind of cocky coming into this tournament. They were really tough teams and it wasn&#146;t easy,&#148; said Selman, 18, who played eight-man, inside-centre and fly-half in the bronze final.