The legacy of Coach O

A man of integrity who was revered as a servant to youth will be remembered with fondness on Saturday, Jan. 13. The celebration of life for Larry Olexiuk starts 2 p.m. at the North Pointe Community Church.
0
Jan 2, 2018 10:32 AM By: Jeff Hansen 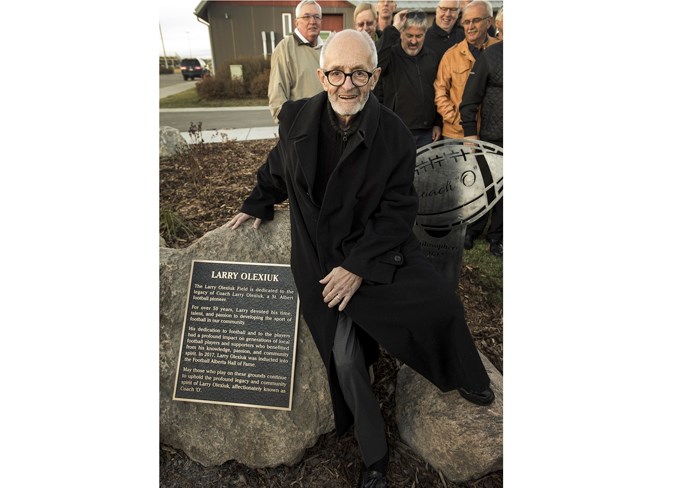 COACH O - Larry Olexiuk poses with the plaque and sculpture in his honour at Larry Olexiuk Field during a ceremony Oct. 23. Olexiuk, 70, died Thursday after a long battle with cancer. The celebration of life for the longtime football coach is Saturday, Jan. 13 at 2 p.m. at North Pointe Community Church.

A man of integrity who was revered as a servant to youth will be remembered with fondness on Saturday, Jan. 13.

The celebration of life for Larry Olexiuk starts 2 p.m. at the North Pointe Community Church.

Olexiuk, 70, succumbed to cancer Thursday at the Foyer Lacombe Hospice.

Cherishing Olexiuk’s memories with heavy hearts are wife Colleen, his bride for 50 years, son Brett, daughter-in-law Paula, grandson Connor, granddaughter Brooklyn and the incalculable number of individuals who are better people in so many ways for the experience of knowing Coach O, a pillar in the football community.

“Coach O made a positive impact on generations of young men in St. Albert. As a coach, mentor, father figure and friend the impact he’ll make will ripple for years and years to come as those men become coaches, fathers and husbands and contribute to the community in many ways. What is a better tribute than that?” said Trevor Lovig, a quarterback under Olexiuk’s tutelage as the St. Albert Storm’s offensive coordinator.

Olexiuk’s extended family was the football players he treated as sons.

“Larry was a selfless man. For over 50 years he gave his time, energy and love to countless young men. He taught us to be better football players but all along he was giving us the skills and tools to be better people,” said Marc Kennedy, a Storm quarterback who credits Olexiuk’s guidance on and off the field for instilling values that will last a lifetime.

“Personally, he was a great friend and mentor. I loved him and will miss him dearly. He always reached out to me after my big curling wins and even the losses. I was always trying to make him proud. He was a wonderful man,” said the 2010 Olympic gold medallist of Olexiuk, one of the first persons to congratulate him after winning the Roar of the Rings Olympic Trials last month.

Olexiuk’s powerful football legacy as a true gentleman of the sport was recognized last year with St. Albert City Council approving the naming of the artificial turf facility and change room amenities building at Riel Recreation Park in his honour after the St. Albert Minor Football Association submitted the naming request.

The announcement left Olexiuk in tears.

“It’s the most humbling episode I’ve ever experienced in my life,” he told the Gazette. “I’m humbled beyond realm. It’s like you’ve reached the pinnacle of your profession so to speak.”

The official christening of the Larry Olexiuk Field was another enduring moment with his family in attendance and the stands packed with friends and former and current players and coaches from the Storm and Bellerose Bulldogs.

“I’m blessed,” Olexiuk said during the on-field formal announcement. “There are a lot of outstanding football coaches around this community that don’t have a field named after them. I have one and it’s a legacy that I will never forget.”

The quarterback coach for the Bulldogs was also visibly moved during the official opening of the amenities building, which included the unveiling of a plaque and sculpture in his honour, and the Philosophers, a group of sports-minded and intellectuals like Olexiuk, showing their heartfelt support at the event.

After the breakup of the Bellerose-based Storm, Olexiuk served in a variety of coaching capacities with the Bulldogs’ football program. The Bellerose senior team’s Outstanding Offensive Player Award is named in his honour.

Olexiuk also assisted in organizing the wildly successful 20th and 25th reunion bashes of the Storm’s 1990 team that won the metro Edmonton league’s Carr conference and was the Tier I provincial finalist.

Olexiuk was also the centre of attention at the 20th reunion of the Storm’s 1997 Carr championship team and Tier I provincial finalist during a memorable October night that coincided with the Bulldogs clinching a playoff spot and Tier I north playdown berth in dramatic fashion on Senior Night on his namesake field.

“Larry Olexiuk was very clearly a man who dared and who experienced tremendous achievements and demonstrated great devotion,” said Chad Hill, head coach of the Bulldogs who played for the Storm with Olexiuk on the coaching staff. “I, like hundreds if not thousands of other men, owe coach Olexiuk thanks for helping me to become not just a better player and coach but a better son, husband and a man.”

Olexiuk never wavered in his devotion to the Bulldogs as a coach while battling through a second bout with cancer this past season.

“I speak on behalf of the Bulldog football family when I say that we dedicated the second half of the season to Coach O. He inspired us through his courage and selflessness. After addressing the team to announce the severity of his disease, not only did he stay committed to the coaching aspect of the game with his film study and scout packages but even more importantly he kept diligent in following up with his players about their homework assignments, which was always based in family values and duties, as well as school and academic obligations,” Hill said.

Olexiuk was unable to attend the Tier I north final in November because of health issues but included the following quote by Theodore Roosevelt in his message to Bulldogs before the game. It’s one of his favourite quotes and he used it a number of times over the years as an inspiration.

“It is not the critic who counts; not the man who points how the strong man stumbles, or where the doer of deeds could have done them better. The credit belongs to the man who is actually in the arena, whose face is marred by dust and sweat and blood; who strives valiantly; who errs, who comes short again and again, because there is no effort without error or shortcoming; but who does actually strive to do the deeds; who knows great enthusiasms, the great devotions; who spends himself in a worthy cause; who at the best knows in the end the triumph of high achievement, and who at the worst, if he fails at least fails while daring greatly, so that his place shall never be with these cold and timid souls who neither know victory or defeat,” Roosevelt said in a speech titled Citizenship In A Republic, delivered at the Sorbonne in Paris, France on April 23, 1910.

“It’s incredibly sad to lose such a tremendous man but all who love Coach O can rejoice in knowing that he has left behind a tremendous legacy. Every time we take the field to play our home games we will be honouring Larry Olexiuk, our faces marred in sweat and blood, spending ourselves in a worthy cause.”