Multiple medals for the McBrides

Age is just a number for St. Albert racquetball players Jack and Marion McBride.
Sep 8, 2018 12:07 AM By: Jeff Hansen 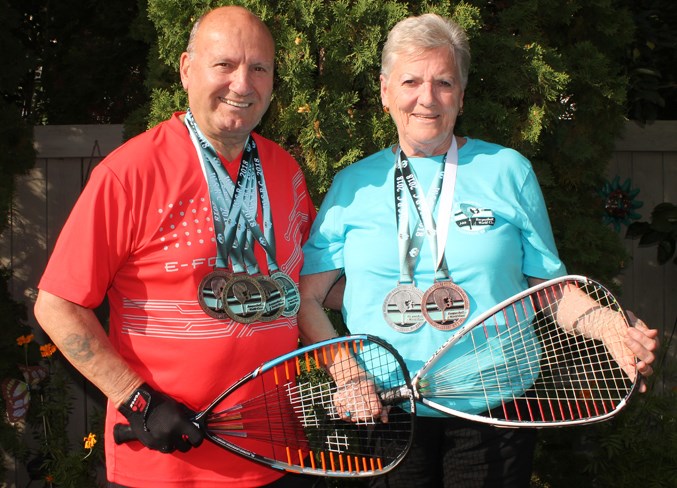 RACQUETBALL MASTERS - Jack and Marion McBride of St. Albert were multiple medal winners at the 34th International Racquetball Federation World Senior Championships last week at Albuquerque, New Mexico. Jack, 80, was the gold medallist in 80-plus men's singles while winning overall gold in the men's 80 and 85-plus singles event. He was also the bronze medallist in 75-plus men's doubles with Luke St. Onge of Colorado. Marion, 78, was the silver medallist in 55 to 75-plus women's doubles with Nidia Funes of California and teamed up with Jack to win bronze in 70 to 75-plus mixed doubles.

Jack, who turns a frisky 81 in November, and the 78-year-old Marion continue to turn back the hands of time as perennial medallists at elite-level tournaments against players usually younger than themselves.

The 34th International Racquetball Federation World Senior Championships that wrapped up Monday in Albuquerque, N.M., was another medal-winning performance by the McBrides.

Marion was the silver medallist in the 55 to 75-plus women's doubles with Nidia Funes of California, and Marion combined with Jack to win bronze in the 70 to 75-plus mixed doubles.

“When you beat someone younger, about 20 years younger, you’re always happy,” Marion said.

“It’s very rewarding,” said Jack, a retired warrant officer in the Canadian army who soldiered through 42 games in 14 matches over four and half days.

Finding competitors the same age and abilities to play racquetball can be challenging for the McBrides, who play locally at LA Fitness in west Edmonton.

“I’m 80 but if I go to a tournament in Calgary and there is nobody in my age bracket to play I will play in the 60s or 50s or whatever (age bracket), but I can hold my own,” Jack said. “People keep coming up to me saying, ‘How the hell do you do that? How can you play like that at your age?’ It’s nice to hear stuff like that. They think the level that you’re at is very high for the age that you’re at.

It’s even tougher for Marion to find women in the same age range and abilities for singles, and the majority of her matches at LA Fitness are with men.

“We always do doubles,” said Marion, noting there are very few times she is teamed up with Jack except at tournaments.

“We succeed when we’re together,” Marion added. “We don’t fight and argue on the court. We don’t get angry at all, well I don’t. If I missed a shot I missed a shot. So what?”

Jack weighed in on his on-court relationship with his bride of 60 years – they met while playing badminton when Jack summoned up the courage to ask Marion for a match and was handily beaten. It was also Marion who got Jack hooked on racquetball with a membership to a facility in Victoria where they lived before moving to St. Albert.

“People always ask me about playing with your wife and I normally don’t play with her here, I always play against her here, because I say playing with your wife is like divorce city,” Jack said “I always follow that up by saying because she just won’t listen. She’s very competitive as you can understand but she doesn’t like being told how to play by me. Somebody else can tell her, which is fine, but if I tell her she gets mad, so I don’t tell her because I don’t play with her.

“Now, when we’re getting ready for this tournament there are things that I went and said to her like, ‘OK, you’ve got to remember when we get there you can’t do that because they will kill us.’ I’m trying to refresh her memory as to what we’ve got to correct before we go and she is very open to that.”

“Singles is very strenuous, especially at this age. You have to be fit to play at this level for racquetball,” Jack said. “I play a lot of doubles (at LA Fitness) and very seldom ever play singles but I had to get ready to play singles for this event because it’s a different game. You’ve got to hit the ball every second shot. Doubles you might hit the ball every fifth shot because if they keep hitting it at your partner you don’t get to touch the ball.”

The last day of the seven-man round-robin singles’ format brought out the very best in Jack against the No. 3-ranked William Baker of Cal State and the No. 1-ranked Arthur Hotchkiss of Yale University.

“They were my two toughest games. I really had to work hard and pull it out to play those two players," Jack said. "In all honesty, when I went into the court with both of those gentlemen I had no idea if I could beat them but I played with confidence and once we got started playing I realized I can do this."

“The third game, which was the tiebreaker because you’ve got to win at last two games to win the match, he was at 10 serving seven and I won that rally and I got the serve back and I scored four straight points and ended up winning 11-10, so that was a good win,” Jack said. “Even when my opponent had 10 I didn’t panic. I just stayed with my thoughts and pulled it out.”

The result at worlds put Jack in position to duplicate his historic Triple Crown of racquetball at the age of 75 in singles as the winner of the Canadian, senior worlds and U.S. Open championships all in the same year.

“It was the first time it’s ever been done,” Jack said. “At the moment I’ve won the Canadian championship and the world championship and I’m heading off to Minneapolis for the U.S. Open championship. If I win that again that will be another highlight. If I can do it twice I’m ready to retire out of competitive play."

Jack was ranked fifth out of six players at the 2013 U.S. Open and on the opening day knocked off the top two seeds.

“When I won the Triple Crown I was playing a gentleman that someone said had won six or seven times the U.S. Open in the age bracket. We went to tiebreaker and we were at 10 all and we each served four times at 10 all, trying to get that last point and finally on the fourth time that I got it I won the rally and I beat him 11-10. Without that game I would not have had the Triple Crown. That’s how tight it can be at that level,” said the winner of various Canadian championships “probably 10 times.”

Marion’s many racquetball accomplishments include three gold medals at the 2009 senior worlds in Vancouver and winning the doubles A division at the 2015 Canada championships with Kathy Iwaasa of Lethbridge,

“Kathy is younger than me and we beat out the No. 1-ranked people from Quebec that were No. 1 for years and years,” Marion said.

Jack added: “Marion won with me in the (senior) worlds five years ago in (70-plus) mixed doubles in Albuquerque and then went to the U.S. Open, the biggest racquetball tournament in the world, and she won the ladies’ 70-plus and the girls she beat in the U.S. Open were the girls she lost to in singles (in 70-plus for bronze) at Albuquerque.”

The McBrides, proud parents of two sons and doting grandparents of three grandchildren and one great-grandkid, show no signs of slowing down in the physically demanding sport.

“I enjoy it, and I like the people I play. I used to say when I go out to curl if we won a game we’re pretty happy, but if we didn’t win I met four new people. It’s like racquetball. It’s the people you meet,” Marion said. ”It also keeps you fit and going, and that’s why we’re still looking down and not up.”

As for Jack, a big wheel in the sport in a variety of capacities on the Racquetball Canada board of directors and with the International Racquetball Federation before winding down the level commitments in recent years, he keeps things simple.

“People always ask me, ‘When are you going to stop playing?’ and I say my body will let me know,” said the driving force of the establishment of the Racquetball Canada Hall of Fame and a member of the selection committee.