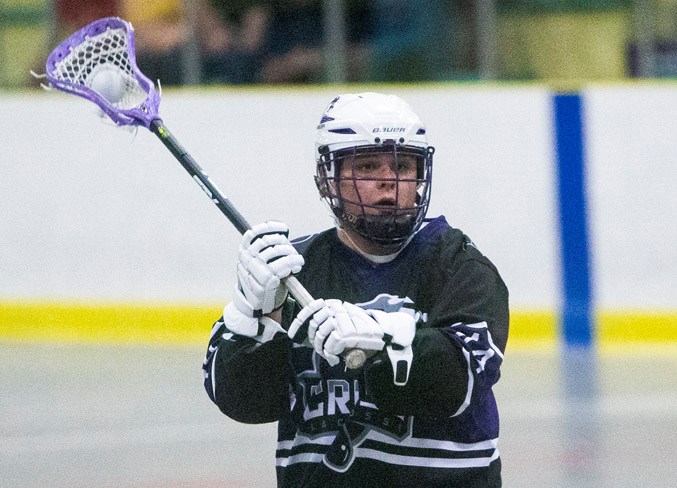 GO FOR GOAL – Keegan Doll and the junior B Tier I St. Albert Crude are shooting to score a victory Tuesday against the Fort Saskatchewan Rebels (11-3-1) in the Rocky Mountain Lacrosse League. Ball drop is 7 p.m. at Akinsdale Arena. The Crude (12-3) are undefeated in eight games and winners of 10 of the last 11 games. CHRIS COLBOURNE/St. Albert Gazette

Game times are noon and 3 p.m.

The Cardinals (7-4) are ranked first in the five-team standings and the Reds (6-5) are locked in a three-way tie with the Innisfail Merchants (6-6), the defending 21U provincial champions, and Edmonton Padres (6-6) for second place.

Ossie McIntyre, a forward, and defenceman Jaxon Pisani of the 2018/19 atom AA Crusaders are competing in the 14-team tournament at West Edmonton Mall Ice Palace.

Tryouts were held in March for more than 240 invited nine- and 10-year-olds across the province to determine the 17-player roster.

The division two games for Team Brick are as follows:

The top two junior B Tier I teams in the north division of the Rocky Mountain Lacrosse League go toe-to-toe Tuesday at Akinsdale Arena.

The teams close out the regular season July 14 at 2 p.m. at JRC Arena.

Overtime was needed in the 9-8 win for the Rebels against the Crude on May 12 in St. Albert.

The Crude and Rebels are ranked second and third, respectively, in the 15-team RMLL behind the south division Calgary Shamrocks (13-1), last year’s provincial champions and fifth-place finishers at the Founder’s Cup national championship.