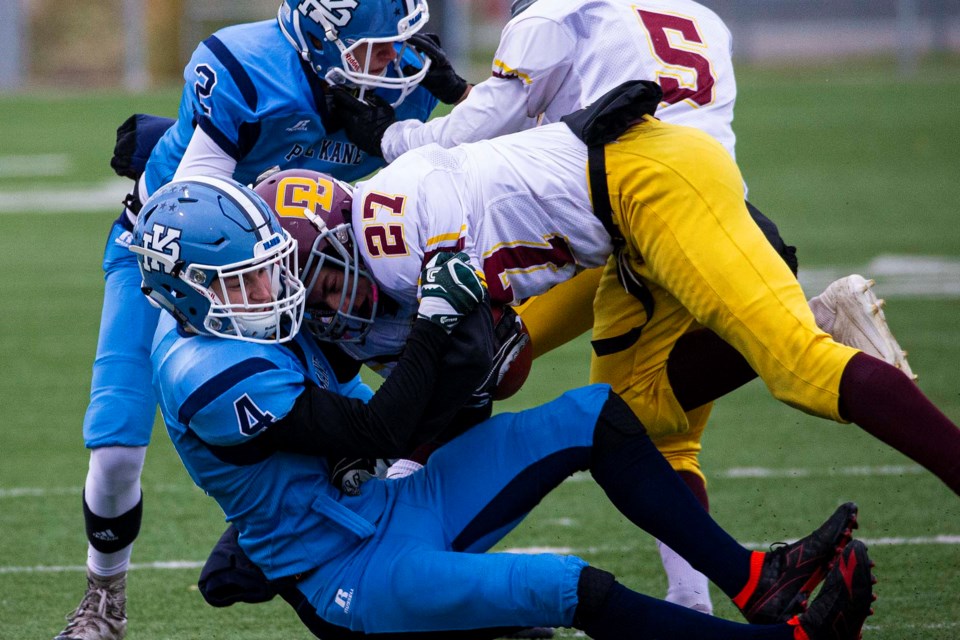 TAKEDOWN – Andrew Gargan of the Paul Kane Blues impedes the progress of the ball carrier with teammate Hayden Webb providing support in last month's 14-12 win against the O'Leary Spartans (1-3-1) in pool A of the division two Miles/division three Gilfillan conference of the metro Edmonton league. The last game for Paul Kane (5-0) before the Miles' semifinal Oct. 24 is Thursday against the Strathcona Lords (2-2-1) at 7:30 p.m. at Clarke Stadium. CHRIS COLBOURNE/St. Albert Gazette

The last game for the undefeated Paul Kane Blues before the metro Edmonton football playoffs is Thursday against the Strathcona Lords.

Kickoff is 7:30 p.m. at Clarke Stadium for the pool A teams in the division two Miles/division three Gilfillan conference.

Paul Kane (5-0) locked up first place in pool A for a semifinal berth in the Miles in last week’s 48-7 victory over the Beaumont Bandits (0-5).

Strathcona (2-2-1) will compete in the Gilfillan playoffs.

The Oct. 17 opening round winner between the teams finishing third in pool A and second in pool B will challenge Paul Kane on Oct. 24 for a spot in the Nov. 1 final.

How far Paul Kane goes in the playoffs will also determine if the team is the second metro Edmonton Tier II (750 to 1,249 students) provincial rep.

In week six of the Football Alberta Tier II rankings, Paul Kane is ninth and the pool B Leduc Tigers (3-1) are 10th.

The No. 7 Austin O’Brien Crusaders (4-1) of the division one Carr conference are the first metro Edmonton Tier II team in the provincial north playoffs.

Senior Night for the Bellerose Bulldogs kicks off at 7:30 p.m. Friday at Larry Olexiuk Field.

Bellerose (2-3) lines up against the Jasper Place Rebels (0-5) in the second-last game of the division one Carr conference regular season in metro Edmonton football.

League play for Bellerose ends Oct. 18 against the Spruce Grove Panthers (3-2) at 6 p.m. at Fuhr Sports Park in what could be a possible preview of the Oct. 25 opening playoff round between the teams ranked fourth and fifth in the Carr.

The second loss in a row for Bellerose was 49-15 against the Salisbury Sabres (5-0) Thursday in Sherwood Park.

Salisbury, the No. 2-ranked Tier I (1,250-plus students) team in the province, piled up 339 rushing yards on 30 carries for six touchdowns.

The 21st annual Turkey Ring is good to go this weekend for 70 teams, including 19 representing the host St. Albert Ringette Association.

Visit stalbertringette.com for the tournament draw.

The feature game at the Turkey Ring is 6:30 p.m. Saturday between the U19AA St. Albert Mission and Edmonton Elite at Mark Messier Arena.