Sunday’s kickoff is 5 p.m. at Eldorado field between the Morinville Ladies and Revolution FC in the St. Albert Women’s Soccer League (SAWSL).
Jun 26, 2009 12:00 AM By: St. Albert Today Staff 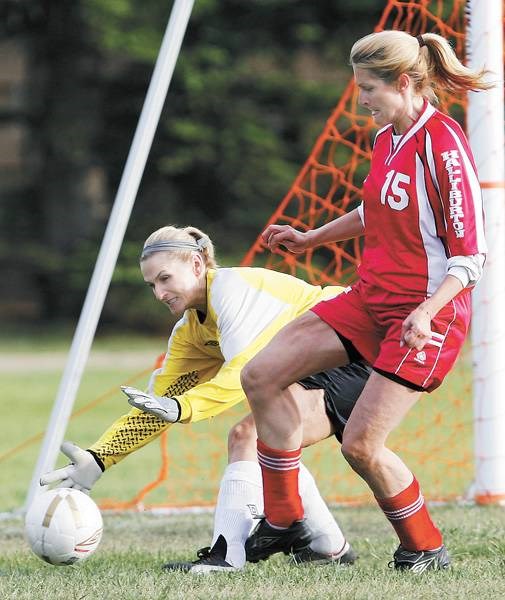 Sunday’s kickoff is 5 p.m. at Eldorado field between the Morinville Ladies and Revolution FC in the St. Albert Women’s Soccer League (SAWSL).

Second-place Morinville (5-1-1) is the top defensive team in division one with four shutouts and only four goals against. Morinville, last year’s tier I finalists, 2007 pennant winners and tier I semifinalists, are led offensively by Suzanne Gaetz’s six goals. Gaetz and Krista Gordon of Revolution shared the 2008 division one Golden Boot scoring title with 14 goals apiece in league play.

Three teams from St. Albert will be rucking and mauling this afternoon on the rugby pitch.

At 2 p.m. in the Edmonton Rugby Union, the Exiles host the Cold Lake Penguins at the St. Albert Rugby Football Club (SARFC) and the undefeated Blues battle the Pirates for first place in the women’s second division at Ellerslie Rugby Park.

The Exiles (3-4) lost their last two games by a combined score of 85-7. The Penguins have only one win in five games.

The Blues (5-0) trail the division-leading Pirates (6-1) by four points with two games in hand. The Blues are coming off a 70-0 pounding of the Fort McMurray Knights (1-5) June 20. The league’s highest-scoring team (a whopping 71.2 points per game average) racked up 12 tries and five conversions in Fort McMurray.

In the Alberta Cup men’s first division, St. Albert and the Druids hook up at 4 p.m. at Outlaws field in Sherwood Park. The 2008 pennant winners and provincial finalists are gunning for their eighth win in as many games. In the May 9 season-opener in St. Albert, the firsts thumped the Druids 38-10. The Druids (4-3) are undefeated in their last three games.