On Tap: Game times for bantam AAA Sabres and junior B Merchants 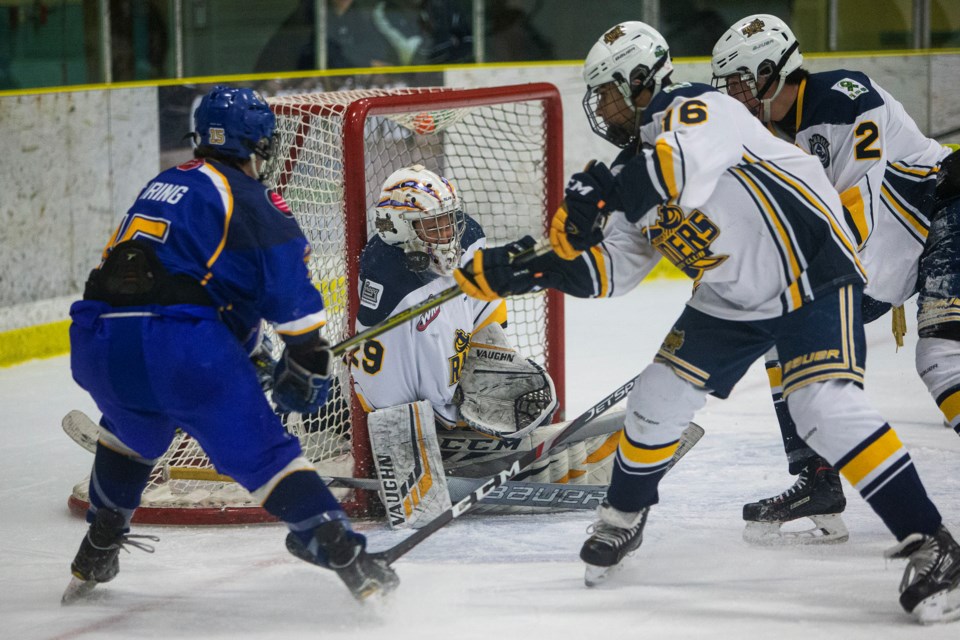 FACE GUARD – Adam Chin of the St. Albert Gregg Distributors Sabres is on the receiving end of a puck to the facemask from Aiden Oiring of the Calgary Royals as Adam Browton, centre, and Ben Belyea provide defensive support in the Alberta Major Bantam Hockey League game Dec. 22 at Jarome Iginla Arena. The 6-2 loss was the second setback in a row for the Sabres (19-5-1) after winning seven straight. Sunday at 5 p.m. the Sabres host the Canadian Athletic Club in the last game before the John Reid Memorial Tournament starts Thursday at Servus Credit Union Place. CHRIS COLBOURNE/St. Albert Gazette

The last game for the St. Albert Gregg Distributors Sabres before the John Reid Memorial Tournament is Sunday in the Alberta Major Bantam Hockey League.

Puck drop is 5 p.m. against the Canadian Athletic Club (4-15-5) at Jarome Iginla Arena.

The 42nd annual bantam AAA tournament starts Thursday with 16 teams competing in four divisions of pool play to determine the A, B and C playoff brackets.

In the Skybox Grill division, the Sabres are in action at Go Auto Arena on Thursday against the Balgonie (Sask.) Prairie Storm at 10:45 a.m. and the Los Angeles Jr. Kings in the Teddy Bear Toss game in support of the St. Albert Food Bank at 8 p.m. and Friday against the St. George’s Saints of Vancouver at 1:30 p.m.

Tournament organizers are encouraging fans to bring a teddy bear wrapped in a plastic bag to throw on the ice when the Sabres score their first goal against Los Angeles.

The only St. Albert team to win the tournament was the 1983 Territorial Leasing Sabres.

Sunday the St. Albert Merchants faceoff against the Sherwood Park Knights in the Capital Junior B Hockey League.

Heading into the weekend, the Merchants (16-13) were third in the west division and Sherwood Park (13-14-3) was fifth in the east standings.

Friday the Merchants were the visitors against the Spruce Grove Regals (3-24-2) and the score was unavailable at press time.

The Merchants have seven games left after Sunday’s match before the playoffs start with the best-of-three qualifying round in the west division.