On Tap: Hockey, football and rugby 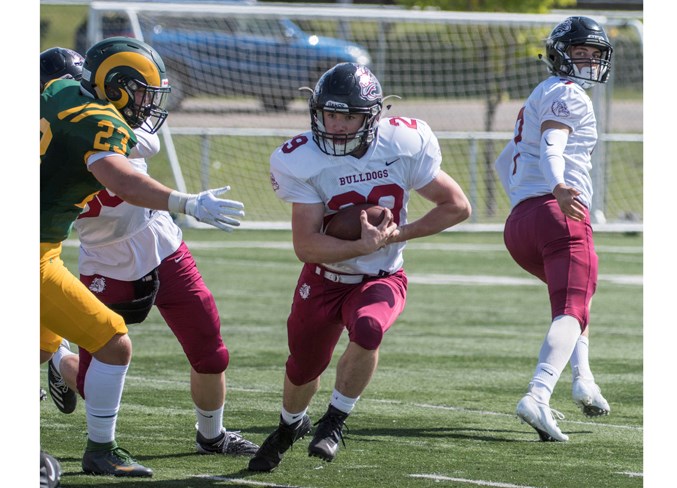 MAKING TRACKS – Gage Froese of the Bellerose Bulldogs goes for a run against the LCI Rams of Lethbridge in exhibition action last month in St. Albert. Friday the Bulldogs host the Ross Sheppard Thunderbirds in division one Carr conference action in the metro Edmonton league. Kickoff is 7:30 p.m. at Larry Olexiuk Field. The Bulldogs are coming off the 49-9 loss to the Harry Ainlay Titans in last weekend's season opener at Foote Field. JOHN LUCAS/St. Albert Gazette

The preseason ends this weekend for the St. Albert Merchants in the Capital Junior B Hockey League.

Last weekend the Merchants doubled the Flyers 4-2 in St. Albert and lost 8-2 to the Edmonton Royals at Confederation Arena.

The Merchants skate into their 36th CJHL season in the Sept. 20 home opener against the Edmonton Mustangs at 8 p.m.

Friday’s home debut for the Bellerose Bulldogs in the metro Edmonton high school football league kicks off at 7:30 p.m. at Larry Olexiuk Field.

Bellerose hosts the Ross Sheppard Thunderbirds in the division one Carr conference match.

Ainlay, the Carr champion the last two years and 2018 Alberta Bowl Tier I (1,250-plus students) finalist, is listed sixth in week two of the Football Alberta rankings.

The winner between SARFC and LA Crude plays the Clan in the ERU final next Saturday at 1:15 p.m. at Ellerslie Rugby Park.

The overall round one/two records for the playoff teams are 7-5 for SARFC and the Clan and 6-6 for the Crude.

The Alberta Major Bantam Hockey League’s lid-lifter for the Sabres is next Friday against the KC Squires at 8:15 p.m. at Callingwood Twin Arenas.