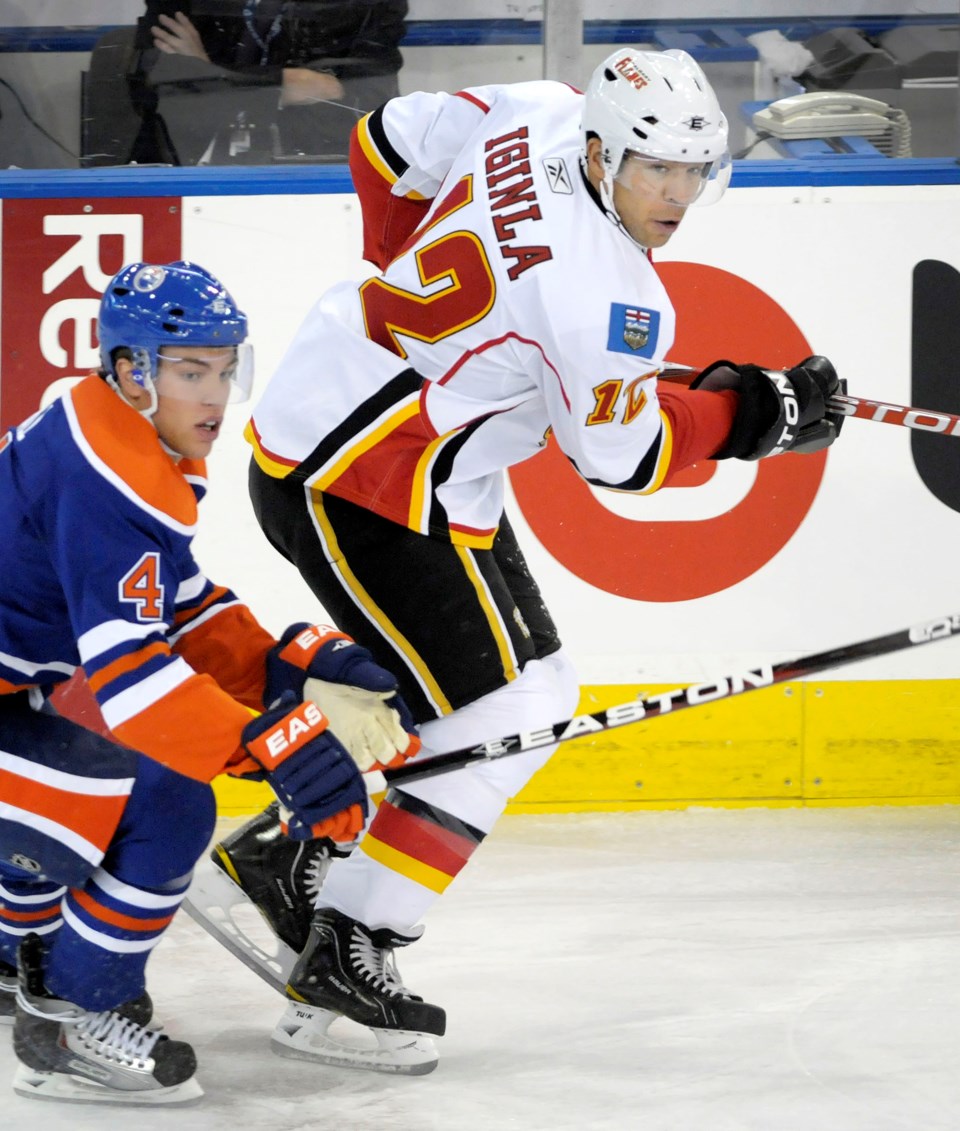 HOMECOMING FOR IGINLA – St. Albert's Jarome Iginla, who had his No. 12 jersey retired by the Calgary Flames last season, skates past Taylor Hall of the Edmonton Oilers during a 2010 NHL game. Iginla will be in St. Albert on Sunday as Akinsdale Arena will be renamed Jarome Iginla Arena during a ceremony starting at 1 p.m. FILE PHOTO/St. Albert Gazette

Iginla will be joined by family and friends, and TSN 1260 radio personality Jason Strudwick, a former teammate of Iginla's with the Kamloops Blazers in the Western Hockey League, will be speaking at the event.

Centre ice will have the Jarome Iginla Arena logo on it and inside the arena is a mural and plaque honouring Iggy.

After the 30-minute ceremony, following a media scrum, Iginla will sign autographs outside the arena, barring bad weather.

A free barbecue, public skate and street hockey game will also take place from 1:30 to 3 p.m.

Iginla, 42, grew up in St. Albert playing minor hockey and baseball, and his junior high sport’s team was the Lorne Akins Gators.

Iginla’s last hockey season in St. Albert was with the 1992/93 Eagle Raiders as the top scorer (34-53-87 in 36 games) in the Alberta Midget AAA Hockey League as a second-year bantam.

The Paul Kane High School alumnus, who ranks 34th all-time in National Hockey League scoring with 1,300 points, is tied for 16th in goals with 625 and is 14th in games played with 1,554 games during 20 seasons with five teams, including 16 with the Calgary Flames. His No. 12 jersey was retired by the Flames last season.

U13 Tier I soccer

The U13 Tier I male and female soccer provincial tournaments kick off Friday afternoon at Riel Park with three St. Albert Impact teams competing for medals.

Impact Jones and Impact Ashworh are among the eight male teams.

In group one, Impact Ashworth plays at 5 p.m. Friday against Villians FC, and Saturday at 9:15 a.m. against the Warriors and 2:45 p.m. against Springbank FC.

In group two, Impact Jones lines up against the LFC Warriors at 5:15 p.m. Friday and Saturday’s match times are 9 a.m. against Juventus and 2:45 p.m. against Foothills FC.

Impact Valenzuela is one of eight female teams and the group two matches are 6:45 p.m. Friday against Blizzard SC and Saturday at 11:15 a.m. against Sherwood Park Phoenix and 4:30 p.m. against Red Deer Renegades.