On Tap: Midget AA and junior B hockey, plus Skyhawks women's basketball 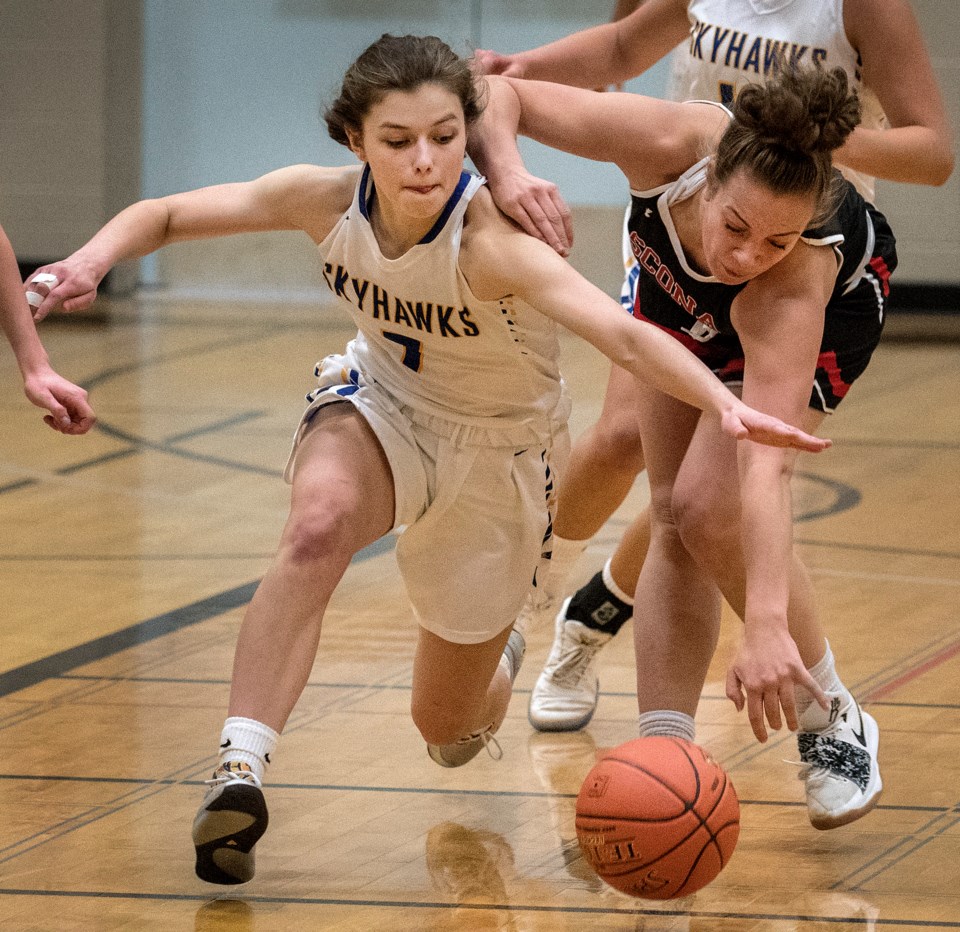 BALL SCRAMBLE – Kamryn DeKlerk of the St. Albert Skyhawks and Lauren Tetteh-Wayoe of the Strathcona Lords compete for a loose ball in tournament action Dec. 12 at Jasper Place High School. The Skyhawks are 8-1 this season (3-0 in metro Edmonton division one and 5-1 in two tournaments) with eight returnees from the 2019 division one champions and 4A provincial gold medallists that finished 30-5 overall. The Skyhawks tip off the new year at the Centennial Coyote Classic Jan. 3-4 at Calgary.

The St. Albert Source for Sports Crusaders tie a bow on 2019 in Saturday’s game in the Northern Alberta Midget AA Hockey League.

The Crusaders (17-1-1) stood first overall in the 23-team NAMHL after Sunday’s 5-2 decision against the Canadian Athletic Club (15-4) at Confederation Arena.

The Crusaders have five players back from the 2019 Playoff Cup championship team, 40-5-3 in league, provincials and playoffs: Hayden Carlson, Carter MacDonald and Ethan Pool as forwards, defenceman Carter Stock and Cole Crozier, recipient of the NAMHL top netminder award.

The Steel are winners of six straight after Sunday’s 4-1 score against the NEBC Yukon Trackers (13-4-2) at Spruce Grove.

The St. Albert Merchants and Morinville Jets have 10 games remaining before the playoffs start in the Capital Junior B Hockey League.

At the Christmas break, the Merchants (16-12) and Jets (10-18) are ranked third and fifth, respectively, in the west division after Sunday’s results. The third loss in a row for the Merchants was 6-4 against the Fort Saskatchewan Hawks (12-9-6) at Jarome Iginla Arena and the first setback after four wins for the Jets was 3-2 against the Wetaskiwin Icemen (12-13-3) at Landrex Arena.

In December, the Merchants were 2-6 while the Jets finished 5-2.

The St. Albert Skyhawks ring in the new year at the Centennial Coyotes women’s basketball tournament Jan. 3-4 in Calgary.

The 2019 4A provincial gold medallists play the Bowness Trojans of Calgary, Lethbridge Collegiate Institute Rams and the Semiahmoo Totems of Surrey, the defending B.C. AAA champions. The Totems are coached by Allison McNeill, the former Team Canada women’s bench boss.

The Skyhawks are 8-1 (3-0 in league play and 5-1 in two tournaments) after going 30-5 as the provincial and metro Edmonton division one champions.

The next league match is Jan. 6 against the Salisbury Sabres (2-0) at 5 p.m. in Sherwood Park.