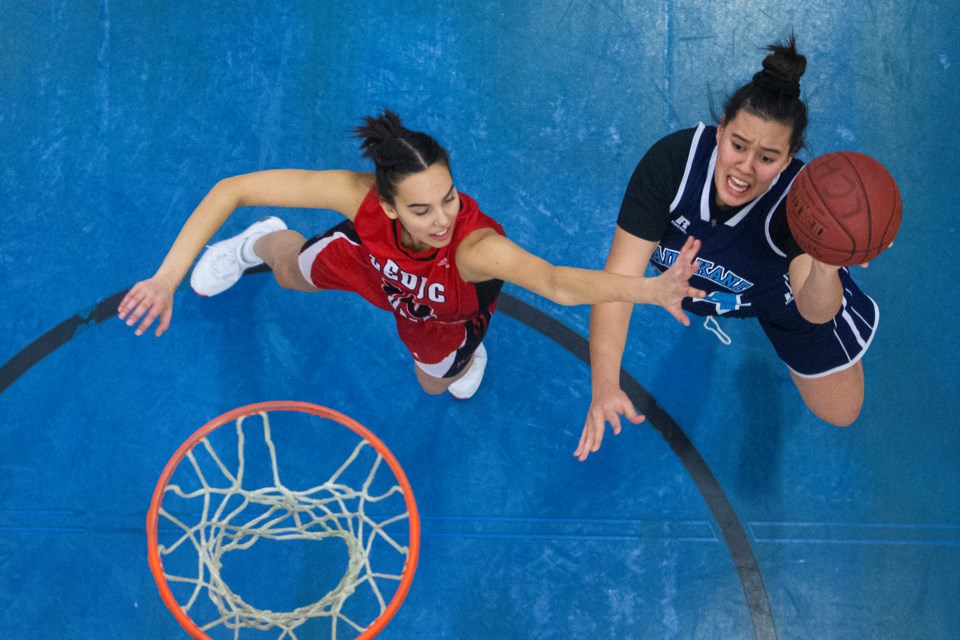 HANDBALL – Kayleena Garda of the Paul Kane Blues gives it her best shot against Jenessa Ramsoomair of the Leduc Tigers at the 22nd annual Mike Dea Classic. The Blues, 1-1 in the metro Edmonton division one league and 4-2 as finalists at the Mike Dea and Totem Hoops Classic tournaments, are hosting the Paul Kane Invitational this weekend with eight teams competing. The first game for the Blues is 11 a.m. Friday against the O'Leary Spartans. CHRIS COLBOURNE/St. Albert Gazette

The Paul Kane Invitational women’s basketball tournament will bring together eight teams for 12 games this weekend.

Draw times are as follows:

Paul Kane is 5-3 overall as the finalist in two tournaments and the next league game is 6:30 p.m. tonight against the Salisbury Sabres (3-0) in Sherwood Park.

It’s the first game in the new year for the midget 15 Flyers after going 1-5 in December.

Liam Cochrane and Liam Fitzgerald lead the Flyers in points with 29 apiece and Cochrane is also the team’s top goal scorer with 17.

The next game for the midget elite St. Albert Sharks is Friday in the Alberta Female Hockey League.

Elle Harapchuk scored in the second period, with Sykora Thornton and Katie Anderson drawing assists, as the Sharks finished with 22 shots.

The Lloydminster Steelers (9-3-1) are second in the north with one less point than the Sharks with a game in hand.