On Tap: Raiders at Mac's tournament and midget AA hockey 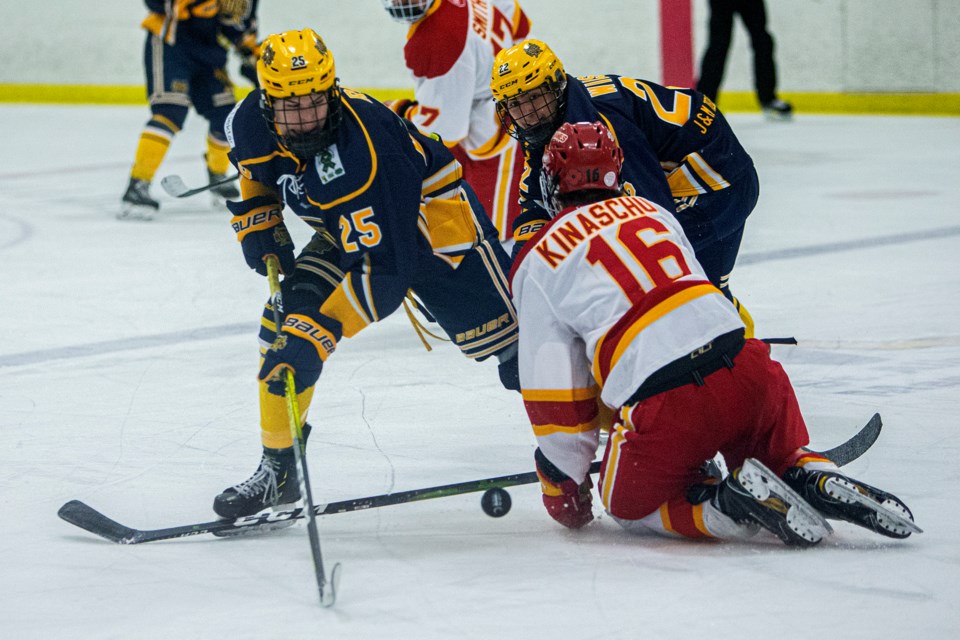 DOUBLE TROUBLE – Matthew Reidy, left, and Noah Wilson of the St. Albert Nektar Raiders attack the puck in front of Kayde Kinaschuk of the Calgary Flames in the last Alberta Midget AAA Hockey League game before the Mac's tournament in Calgary. The Raiders (18-1-3) won 4-1 Sunday at Jarome Iginla Arena. The defending Mac's Cup champions opened the 42nd annual tournament Friday against the Calgary Royals and the score was unavailable at press time. The Raiders also play the Airdrie Bisons today at 11:45 a.m., the Cariboo Cougars at 8 p.m. Sunday and Moose Jaw Warriors at 12:30 p.m. Monday. CHRIS COLBOURNE/St. Albert Gazette

Today the St. Albert Nektar Raiders faceoff against the Airdrie Bisons at 11:45 a.m. and Sunday’s start time is 8 p.m. against the Cariboo Cougars. Both games are at Father David Bauer Arena.

The first game for the Raiders in pool four of the 25-team tournament was Friday against the Calgary Royals and the score was unavailable at press time.

The first-place teams in the five pools and three wild cards advance to the quarter-finals. The final is Jan. 1 at the Saddledome.

The Raiders have four players back from the 2019 champions that finished 6-1 as the first St. Albert male hockey team to win the Mac’s Cup while joining the 1990 Eagle Raiders as the only St. Albert teams to qualify for the men’s final.

The Raiders (18-1-3) skated into the Mac’s as the No. 1 team in the Alberta Midget AAA Hockey League while going 10-0-1 before the Christmas break.

The Raiders are also averaging 1.40 goals-against per game as the AMHL’s top defensive team.

Today’s matinee between the St. Albert Source for Sports Crusaders and Lloydminster Blazers begins at 2:15 p.m. at Go Auto Arena.

In the Northern Alberta Midget AA Hockey League, the Besa division Crusaders (17-1-1) are ranked first overall and Lloydminster (7-10-2) is fourth in the CanAccom division.

The only team to beat the Crusaders was the St. Albert Steel and the 6-4 result Dec. 14 on Raiders Day in St. Albert snapped a 12-game winning streak for the defending Playoff Cup champions.

The Steel (13-3-1) are second behind the Crusaders in the Besa standings.

The Crusaders are averaging a league-high six goals per game with six players scoring 10 or more goals.

Brady Harroun of the Crusaders leads the NAMHL in goals with 24 and is second in points with 38 in 19 games.

The Steel are led offensively by Brett Reiter’s 12 goals and 28 points in 17 games.