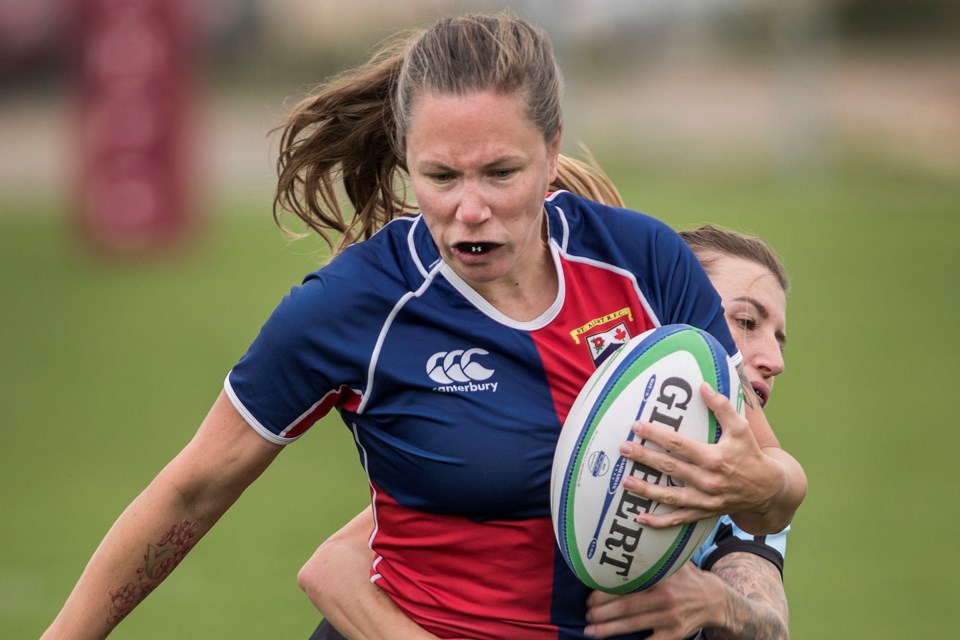 SQUEEZE PLAY – Shantel LeClercq of the St. Albert Rugby Football Club division two women's team is wrapped up from behind in the Edmonton Rugby Union friendly against the Fort McMurray Knights last month. Today at 12 noon SARFC (4-2, 6-5 overall) plays the LA Crude (3-2, 5-5 overall) at Leduc and a victory in the last round two match in the ERU fixtures would secure home field advantage for SARFC in next Saturday's semifinals. DAN RIEDLHUBER/St. Albert Gazette

Kickoff is 12 noon at Leduc between second-place SARFC and first-place LA Crude. Both teams are 4-2 in round two and 6-5 overall and the difference between them in the Edmonton Rugby Union table is one bonus point.

The semifinals are next Saturday and the ERU championship is Sept. 21 at 1:15 p.m. at Ellerslie Rugby Park.

The provincial final is Sept 28 at 5 p.m. at Ellerslie.

Upcoming for the Sabres is the John Ferguson Memorial Preseason Tournament at Terwillegar Community Recreation Centre and the first game is at 7 p.m. Monday against the SSAC Southgate Lions.

The first of five exhibitions for the St. Albert Nektar Raiders is Monday against the KC Pats at 5:30 p.m. at Bill Hunter Arena.

Wednesday the Raiders play the Sherwood Park Kings at 8:15 p.m. at Bill Hunter.

The Alberta Midget AAA Hockey League regular season starts Oct. 5 against the KC at 6:15 p.m. at Castledowns Arena and the home opener is Oct. 6 against the Southside Athletic Club at 2:30 p.m. at Jarome Iginla Arena.

The following St. Albert bantam and peewee teams are in action in week two of the Capital District Minor Football Association regular season.

Today in the bantam Marv Mills Division, the Fury travels to Wetaskiwin to battle the Warriors at 12:30 p.m.

Sunday the nine-a-side peewee Colts are in Stony Plain to play the hometown Bombers at 10 a.m. and in the bantam Susan Morgan Division the Palmer 49ers huddle up against the Sherwood Park Rams at 12:30 p.m. at Emerald Hills Turf Field.