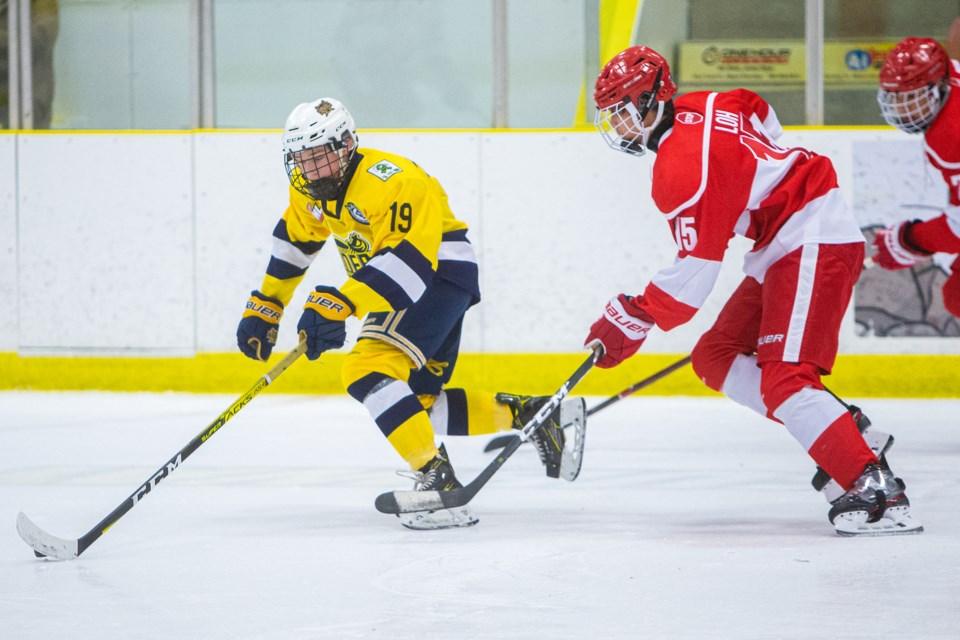 LEADING THE WAY – Evan Zazulak of the St. Albert Gregg Distributors Sabres breaks away from Nigel Loh, centre, and Zach Zapanta of the St. George's Saints of Vancouver at the John Reid Memorial Tournament last week. Zazulak scored the opening goal in the 8-3 loss. The Sabres finished the 42nd annual St. Albert bantam AAA tournament with two wins and three losses as the B finalists. The Sabres (20-5-1) resume league play Sunday against the Calgary Northstars (5-12-7) at 10:45 a.m. at Jarome Iginla Arena and 8 p.m. Tuesday against the SSAC Lions (12-6-5) at Terwillegar Community Recreation Centre before competing at the Kelowna tournament on Wednesday. CHRIS COLBOURNE/St. Albert Gazette

The St. Albert Gregg Distributors Sabres have two games scheduled before next week’s tournament in Kelowna.

Sunday the Sabres host the Calgary Northstars (5-12-7) at 10:45 a.m. at Jarome Iginla Arena and Tuesday’s start time is 8 p.m. against the SSAC Lions (12-6-5) at Terwillegar Community Recreation Centre.

The Sabres (20-5-1) are ranked second overall behind the Red Deer Rebels (20-2-2) in the Alberta Major Bantam Hockey League with seven games left for the St. Albert team before the playoffs.

Wednesday the Sabres are in Kelowna and the tournament draw includes matches against the Okanagan Hockey Academy, Seattle and Fraser Valley.

Friday the Steel (17-5-1) and the first-place St. Albert Source for Sports Crusaders (19-1-1) squared-off and the score was unavailable at press time.

The next games for both teams are 8:15 p.m. Thursday for the Steel against the Strathcona Warriors (4-15-4) at Go Auto Arena and 8:45 p.m. Friday for the Crusaders against the Leduc Roughnecks (3-2-1) at Mark Messier Arena.

The bantam elite St. Albert Chargers skate twice as the home team this weekend in the Alberta Female Hockey League.