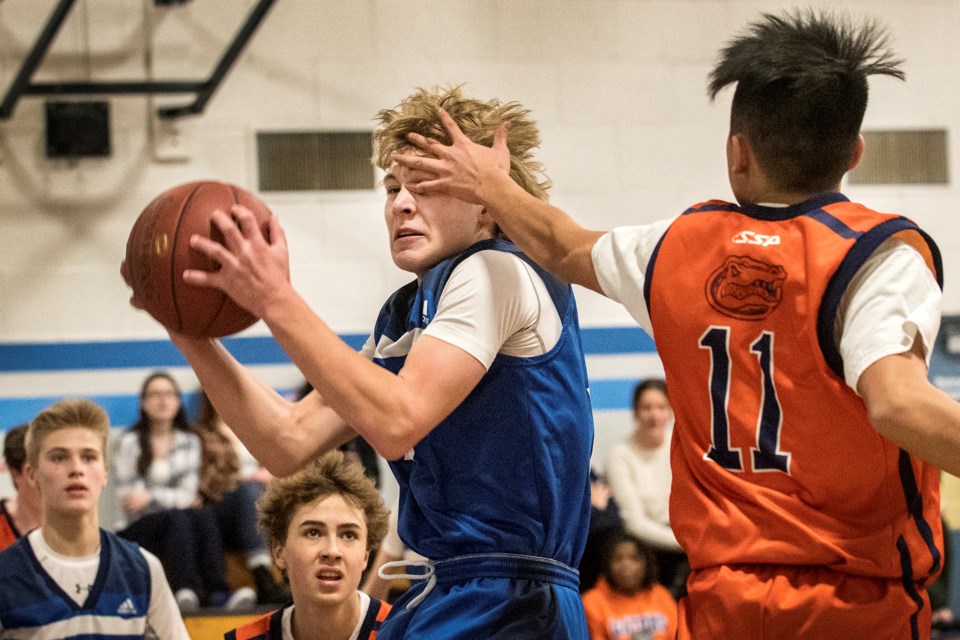 EYEFUL – Eric Hartman of the Richard S. Fowler Falcons got a little more than he expected while grabbing a rebound against David Luu of the Lorne Akins Gators in the St. Albert Physical Education Council junior high game last week at Fowler. Lorne Akins beat the two-time defending SAPEC Tier I city champions 80-60. Upcoming for the Falcons is the Fowler Classic, a six-team boys' and girls' tournament starting Thursday afternoon at the Fowler and Vincent J. Maloney schools. DAN RIEDLHUBER/St. Albert Gazette

Game of the week

Puck drop is 8:45 p.m. between the Source for Sports Crusaders and Steel at Mark Messier Arena.

The Crusaders are also ranked No. 1 in the 23-team league.

The defending Playoff Cup champions were winners of 12 in a row before the 6-4 loss to the Steel on Dec. 14.

Brady Harroun of the Crusaders ranks first in the NAHL in goals with 29 and is second in points with 46.

Brett Reiter is the Steel’s top scorer with 36 points while Joshua Cyr and Aidyn Hutchinson are the team's co-leaders in goals with 14 apiece.

The Fowler Falcons and VJM Marauders are St. Albert Physical Education Council reps in the six-team boys’ and girls’ divisions.

Saturday’s crossover playoff games at Fowler start at 9 a.m. and the finals are 3 p.m. for the girls and 4:30 p.m. for the boys.

The Flyers are winless in three games after Sunday’s 3-0 road loss to the Lloydminster Bobcats (16-7-2).

Tyler Fitka is sixth in REM scoring with 35 points in 26 games and Tye Cameron is the team leader in goals with 21 in 25 games.