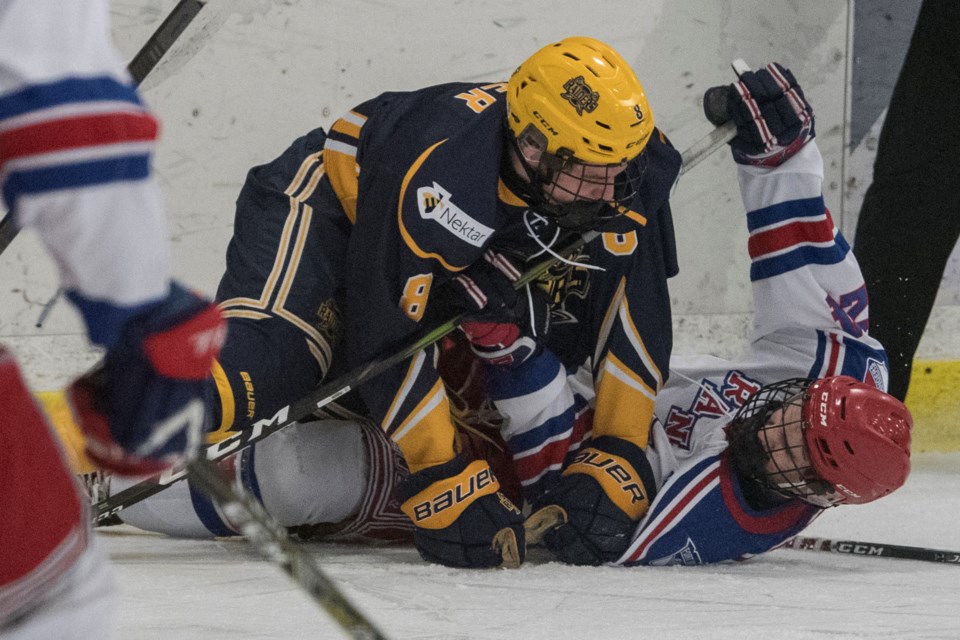 UPPER HAND – Chase Visser of the St. Albert Nektar Raiders has Spencer Florchuk pinned to the ice in last Saturday's 4-2 win over the Fort Saskatchewan Rangers in the Alberta Midget AAA Hockey League. Tonight the first-place Raiders (25-1-4) host the Red Deer Chiefs (16-10-3) in the second-last game before the playoffs and puck drop is 8 p.m. at Jarome Iginla Arena. League play ends Feb. 15 for the Raiders against the Rangers (14-11-4) at 2:30 p.m. at JRC Arena. JOHN LUCAS/St. Albert Gazette

The 2019 AMHL provincial finalists also have a first-round bye for a berth in the best-of-five north semifinals.

The Raiders also finished 2-1-1 at the Mac’s Cup in Calgary during the Christmas break as the defending champions.

The St. Albert Merchants have one game left before the playoffs kick off in the Capital Junior B Hockey League.

Last year’s Merchants finished fourth in the west at 14-19-5 and in the playoffs swept the fifth-place Mustangs in the first round and lost the quarter-final series to first-place Beverley in three games.

The fifth consecutive victory and seventh in eight games for the Merchants was Wednesday’s 12-2 dismantlement of the last-place Edmonton Mustangs (3-34) at Bill Hunter Arena.

The next game for the St. Albert Gregg Distributors Sabres is Monday in the Alberta Major Bantam Hockey League.

The Sabres (21-5-2) are the top team in the north conference with five games remaining before the best-of-three nitro division opening round starts.

In the overall AMBHL standings, the Sabres and Calgary Flames (22-5) are tied for second behind the Red Deer Rebels (22-2-3).