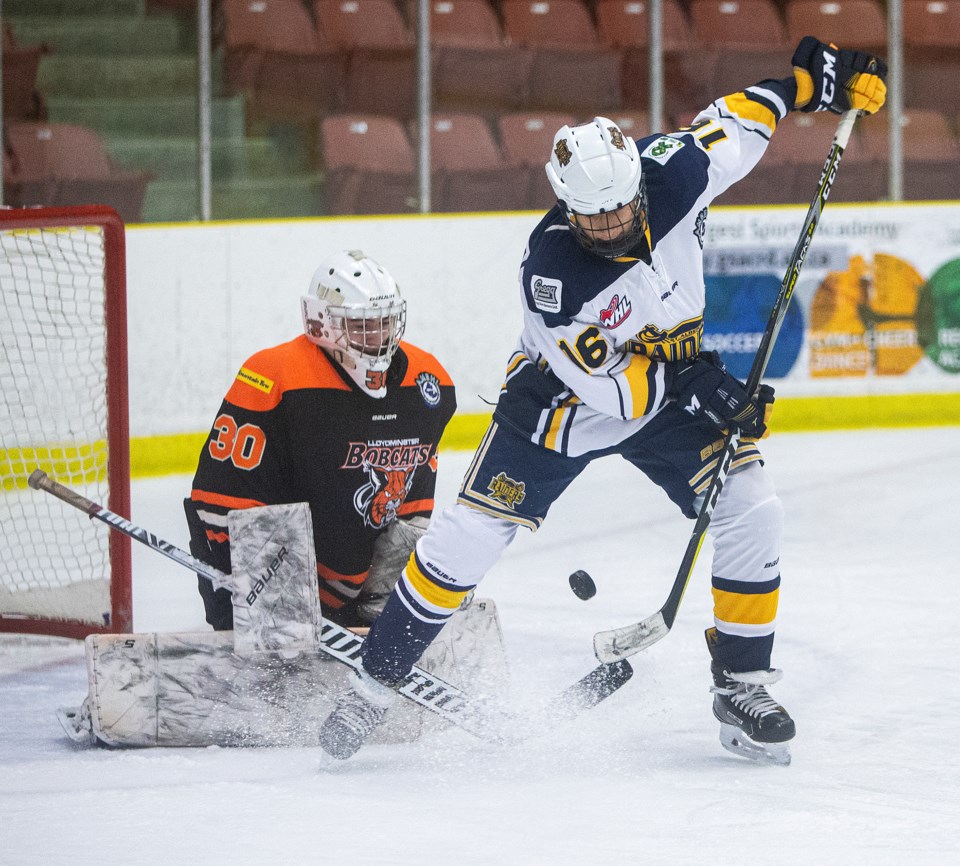 REDIRECTION – Adam Browton of the St. Albert Gregg Distributors Sabres tips the puck in front netminder Scott Ratzlaff of the Lloydminster Bobcats (9-4-6) in the Alberta Major Bantam Hockey League. The Sabres scored two late goals in the 2-1 win on Raiders Day in St. Albert last Saturday at Go Auto Arena. The last game for the first-place Sabres (17-4-1) before the Christmas break is 10:45 a.m. Sunday against the Calgary Royals (11-5-3) at Jarome Iginla Arena. CHRIS COLBOURNE/St. Albert Gazette

The last game before the Christmas break for the St. Albert Gregg Distributors Sabres is Sunday at Jarome Iginla Arena.

The Sabres (17-4-1) skate into the weekend ranked first overall in the Alberta Major Bantam Hockey League.

Carmelo Crandell’s second goal of the night was scored on the power play to knot the count at two with 3:46 to play.

The Flyers potted the winner with 62 seconds remaining.

Crandell is third in AMBHL scoring with 38 points and second in goals with 24 in 22 games, including a league-high eight on the power play.

The St. Albert Royals close out their December schedule with a pair of weekend home games in the Rural & Edmonton Midget 15AA Hockey League.

Matthew Fischer’s second goal of the night in Camrose made it 6-3 with 9:36 remaining.

Fans are encouraged to bring non-perishable food items to Sunday’s fundraiser between the Bears and St. Albert Blues and game time is 8 p.m. at Mark Messier Arena.

Hunter, the Edmonton Oilers’ mascot, will be in attendance.