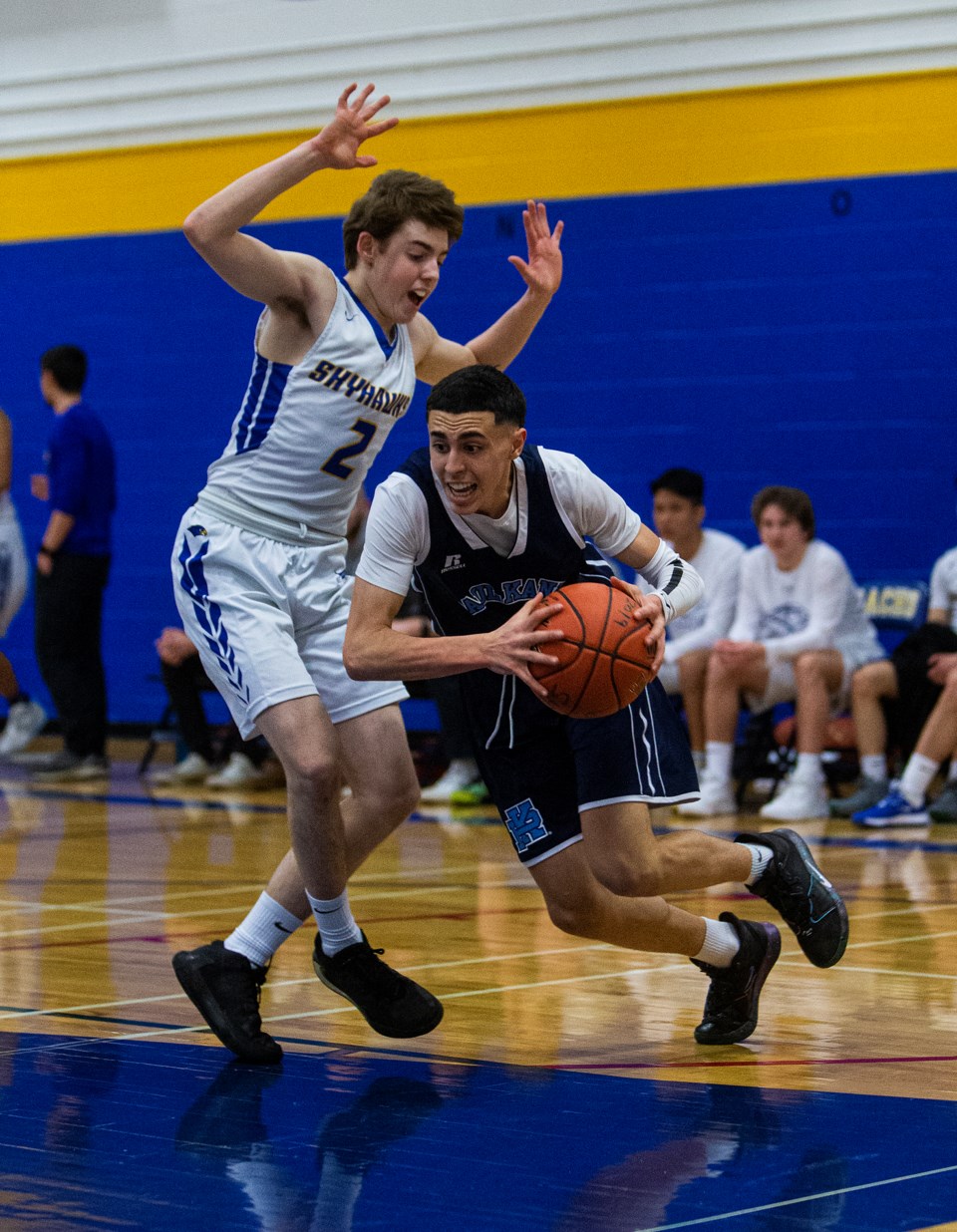 GOING FOR IT – Stefan Marano of the Paul Kane Blues attempts to squeak past Jack Hudson of the St. Albert Skyhawks in Monday's metro Edmonton division two match. Paul Kane (7-2) won 79-65 at the SkyDome. The Skyhawks (3-5) led 32-30 at halftime. CHRIS COLBOURNE/St. Albert Gazette

A tale of two halfs told the story in Monday’s friendly rivalry game between the Paul Kane Blues and St. Albert Skyhawks.

A two-point halftime lead by the Skyhawks turned into a 15-point deficit after three quarters in the 79-65 loss to Paul Kane in metro Edmonton division two men’s basketball at the SkyDome.

“In the first half, we did not come out very strong. We thought we had it in the bag and they came out hard at us. (At halftime) we were in the change room and had a talk. We realized what we needed to fix and in the second half we came out hard and got the job down,” said Jack MacKinnon.

The Grade 11 guard was a key contributor in the turnaround with a layup and three-pointer in the first minute of the second half as Paul Kane outscored the Skyhawks 27-10 in the 10-minute period to make it 57-42.

“It was a big momentum shift,” MacKinnon said.

It was 43-36 Paul Kane when the Skyhawks called a timeout with 6:01 left until quarter time.

“We played good in the first half. We were winning and then they started hitting a lot of threes. They have some good three-point shooters and we didn’t really have our hands up and we should’ve played some harder defence,” said Luke Brodeur, a standout for the Skyhawks with a game-high 27 points.

MacKinnon‘s 13 points in the win included a basket in the second quarter.

“In the first half I wasn’t too confident in myself and then in the second half I realized that I needed to shoot it more, so as soon as I had the open shots I took those and they ended up falling down,” said MacKinnon, who pumped in his third three-ball with 1:04 to go in the third quarter to extend the lead to 55-40.

In the low-scoring first half, both teams couldn’t hit sand falling off a camel offensively while combining for more missed shots than baskets.

After a fast start, the Skyhawks allowed an eight-point lead to slip away to trail 17-13 at quarter time as Joshua Fraser potted eight of his 12 points for Paul Kane in the first period.

After a nifty inside move by Connor Wanhella put Paul Kane up 30-27 with 2:50 left in the half, the Skyhawks replied with five consecutive points on the strength of two Tony Mak baskets in the last minute.

MacKinnon’s drive to the hoop 19 seconds into the second half triggered Paul Kane’s offensive outburst.

Baker’s 14 points included four three-points and the first one pushed Paul Kane ahead at 38-32 with 1:32 gone in the third quarter.

Ryan Holmes drained eight of his 15 points in the fourth quarter, Stefan Marano chipped in with nine points and Wanhella thrived at both ends with extra floor time after starting post Kevin Hessell suffered a lower body injury halfway through the second quarter and Paul Kane up 24-23.

In the fourth quarter, Paul Kane racked up the fouls as the Skyhawks shot 13-for-19 from the free-throw line and Brodeur was 6-for-6 while depositing 12 points in the period after dropping 13 on the visitors before the break.

Brodeur’s totals included a three-ball among the seven points in the first quarter.

“It’s nice when you get to start off with free throws like I did today, You see the ball go through the hoop and then I really like to go to my mid-range, my one dribble pull ups and that was working for me," said the Grade 12 forward.

As for the positives in the loss, “We rebounded pretty well. Sometimes we have a problem with that, but today our bigs really stood their ground,” said Brodeur of the presence of Mak and Joland Grada in the paint.

The Skyhawks (3-5) are winless in three league games with three remaining to nail down a spot in the March 2 quarter-finals.

“We started pretty great (this season), but we’ve hit a little rough patch here so we’re hoping to get some wins,” Brodeur said.

“It’s just confidence, that’s it,” he added. “When we play together as a team we work really well and that comes with confidence. When everybody is taking the ball inside the paint and everyone is shooting it it opens up gaps for everyone and it draw fouls and gets them into trouble. It opens everything up on offence especially.”

Paul Kane is 7-2 in division two and 13-9 overall after its third win in a row following back-to-back losses of 67-62 to the Strathcona Christian Academy Eagles (8-0) in Sherwood Park and 94-87 to the Archbishop Jordan Scots (4-5) in St. Albert before the exam break.

“We realized the season wasn’t over even though it's soon to be done so we just need to stay strong and finish,” said MacKinnon, one of six returnees from the 2019 13-1 division two finalists.

Last week’s 79-65 decision against the visiting Spruce Grove Panthers (6-2) gave Paul Kane a leg up on a bunch of teams in the thick of the playoff race.

“We probably had the best defensive game we’ve had all season. We talked a lot and got a lot of open shots," said MacKinnon, 16. "We realized that was a game for second place so we needed to pull ahead and get the job done. They're one of the few teams we really have the same level of competition and skill-wise with so if we play those teams in playoffs we need to come ready to play, especially against SCA (Eagles, ranked fifth provincially in 3A) who is top right now. We slipped up when we played them and we didn’t come out ready to play.”

League play continues today with away games for Paul Kane at the Austin O’Brien Crusaders (2-5) and the Skyhawks at the Millwoods Christian Royals (2-6). Start times are 5 p.m.

This weekend the Paul Kane men’s and women’s teams are in Magrath for a tournament and the first game for the guys is against the Raymond Comets, ranked third provincially in 4A.