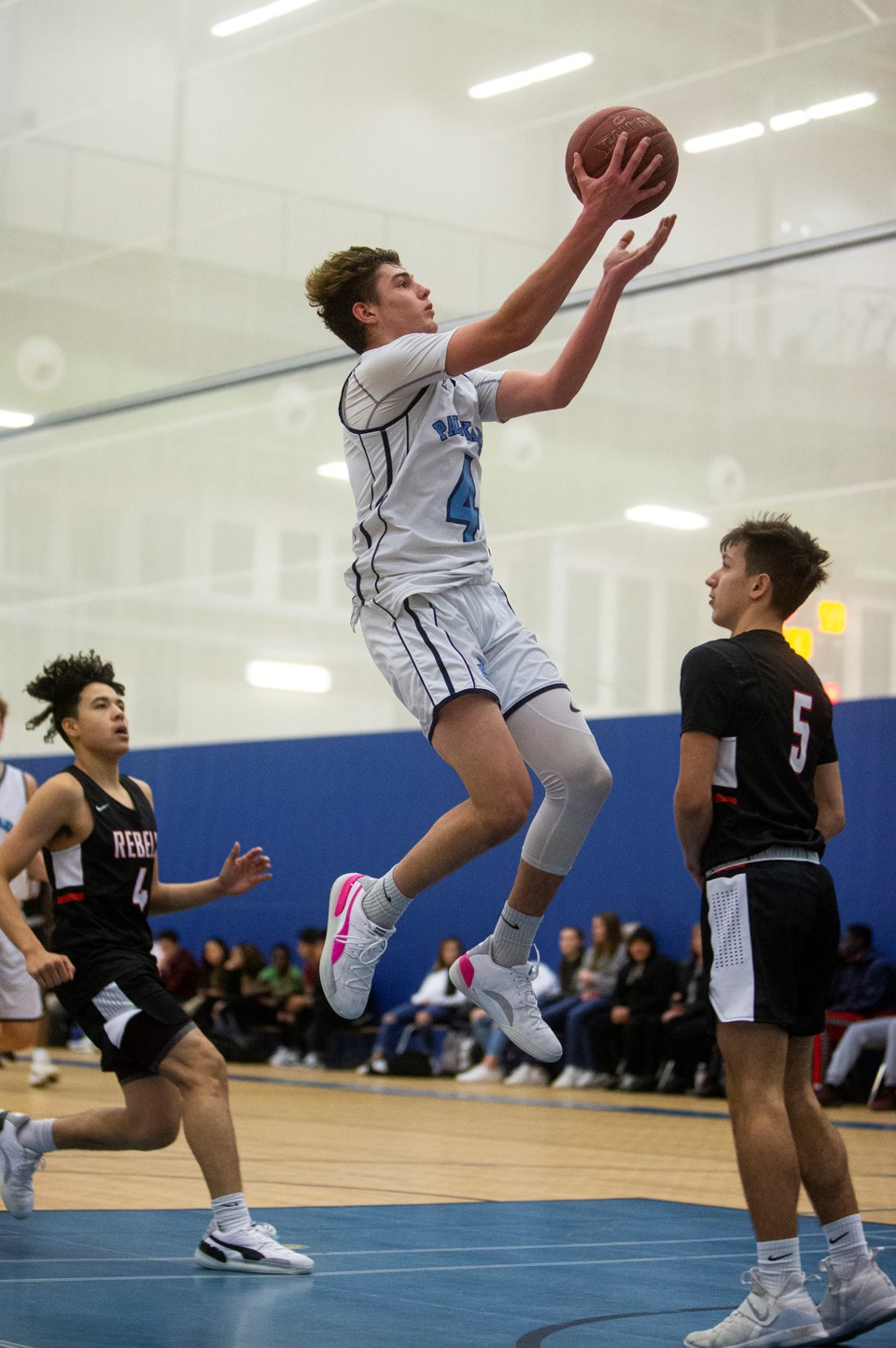 SKYWALKER – Roka Phalen-Baker of the Paul Kane Blues goes airborne for the layup against the Jasper Place Rebels at the 22nd annual Mike Dea Classic. Paul Kane won 60-53 while going 3-1 in the 16-team draw. The last game for the 2019 metro Edmonton division two finalist was Saturday's 82-75 win against the Strathcona Lords to determine fifth place. CHRIS COLBOURNE/St. Albert Gazette

The third win in four games at the 22nd annual Mike Dea Classic was 82-75 against the Strathcona Lords for fifth place in the 16-team draw.

Saturday's triumph was also the second against metro Edmonton division one teams for the 2019 division two finalist.

“We played some pretty good games this tournament,” said Grade 12 guard Drew Olsen, while listing off wins of 60-53 against the Jasper Place Rebels, the defending 4A provincial champions, and 65-61 against the Austin O'Brien Crusaders during the season-opening tournament for Paul Kane.

The only loss was 86-60 to the Ernest Manning Griffins of Calgary in the quarter-finals. The Griffins were tournament finalists.

“We were just really tired and we weren’t executing well enough on our outer defence and they were hitting a lot of threes,” said Olsen of the team’s second game Thursday and the third in two days. “We really dealt with that today (against the Lords). We shut down their shooters in the second half and played really good defence and that’s why we were able to come back (down 35-32 at halftime).”

The game started off with 12 straight points by Paul Kane as Ryan Holmes recorded seven straight after the opening tip off before the Lords got on the scoreboard.

The first quarter ended with a three-point buzzer beater by the Lords to knot it 15.

The Lords continued to score at will for a sizeable 34-19 advantage with under five minutes left until the break before Paul Kane responded with a strong push on points by Holmes, Jack MacKinnon, Connor Wanhella and Olsen to close out the first half trailing by three.

“We’re a bunch of guys when we're down we didn’t get down on ourselves. We get up on ourselves and we help each other out and we're confident in each other and we cheer each other. Even if we're down 20 points we can still come back,” said Olsen of the 14-player lineup of six returnees from the 21-3 team, plus 10 Grade 12s.

The Lords were poised to seal the deal in the third quarter leading by 12 points before Paul Kane caught lightning in a bottle during a 12-2 comeback charge highlighted by Olsen’s seven points, McKinnon’s three-ball and some flashy plays by rookie Stefano Marano.

Olsen ended the third quarter by pouncing on a missed three-pointer by Marano and quickly popped it through the hoop before the buzzer from behind the arch for his third three-ball of the contest to pull within two of the Lords at 55-53.

“We were dealing with some foul trouble and it brought our energy down, but we came out and we kept plowing through. We just had to keep talking because communication is really key in games like this where it's really competitive,” said Olsen, who produced nine of his team-high 22 points in the third quarter. “We were also moving the ball a lot, we started to make shots and just get the ball inside. Our cuts were finishing at the hoop and things just started working out for us.”

Paul Kane kept pouring it on after the Lords hit a three-ball right off the hop in the fourth quarter.

Keegan Sharpe deposited two free throws to tie it at 58 and Marano's put-back off a turnover evened the count at 60.

Wanhella’s offensive rebound with 6:52 to play put Paul Kane head to stay and Olsen followed with a pair of three-pointers within less than a minute that forced the Lords to call a time out down 68-60 with 5:59 to go.

It was 75-70 when Sharpe reeled in a defensive rebound and the ball eventually found its way to MacKinnon and his three-pointer from the corner clinched it with 62 seconds remaining.

“We were scoring and we were stopping them from scoring,” Olsen said. “It was a competitive game and we knew they were going to be pretty good so we just had to bring it. We had to power through it and we came out on top at the end.”

Olsen, 17, is one of five additions from the 2019 division two junior finalists in the metro Edmonton league and is also among seven players on the senior squad from the 2018 division two junior championship team that chipped away at a 23-point deficit in the second half after trailing 40-28 at halftime in the 81-72 final against the St. Peter the Apostle Spartans. Paul Kane outscored the Spartans 34-10 in the last quarter as Olsen wired four of the team’s six three-pointers in the last 10 minutes.

“We have a lot of depth on the bench and that really helps us out because we just have a constant stream of guys who can come out and play and we’ve all played together for a long time,” Olsen said.

Holmes notched 12 of his 15 points against the Lords in the first half and MacKinnon finished with 13.

The next tournament is the 27th annual Totem Hoop Classic and the first game is 2:30 p.m. Thursday against the host Ross Sheppard Thunderbirds. Depending on the result, Paul Kane plays Friday at 12:30 p.m. against the Edmonton Christian Lions or the Bishop Grandin Ghosts of Calgary.

FOUL SHOTS: The second play-in game in the ability round for division one status for Paul Kane was Monday’s 65-49 loss to the host Leduc Tigers. The first game was last Wednesday’s setback to St. Peter the Apostle in Spruce Grove.

Play play wrapped up Tuesday against the Holy Trinity Trojans and the score was unavailable at press time.

The top three teams in Paul Kane’s pool earn division one promotions and the bottom team stays in division two.