Paul Kane has point to prove in men's basketball 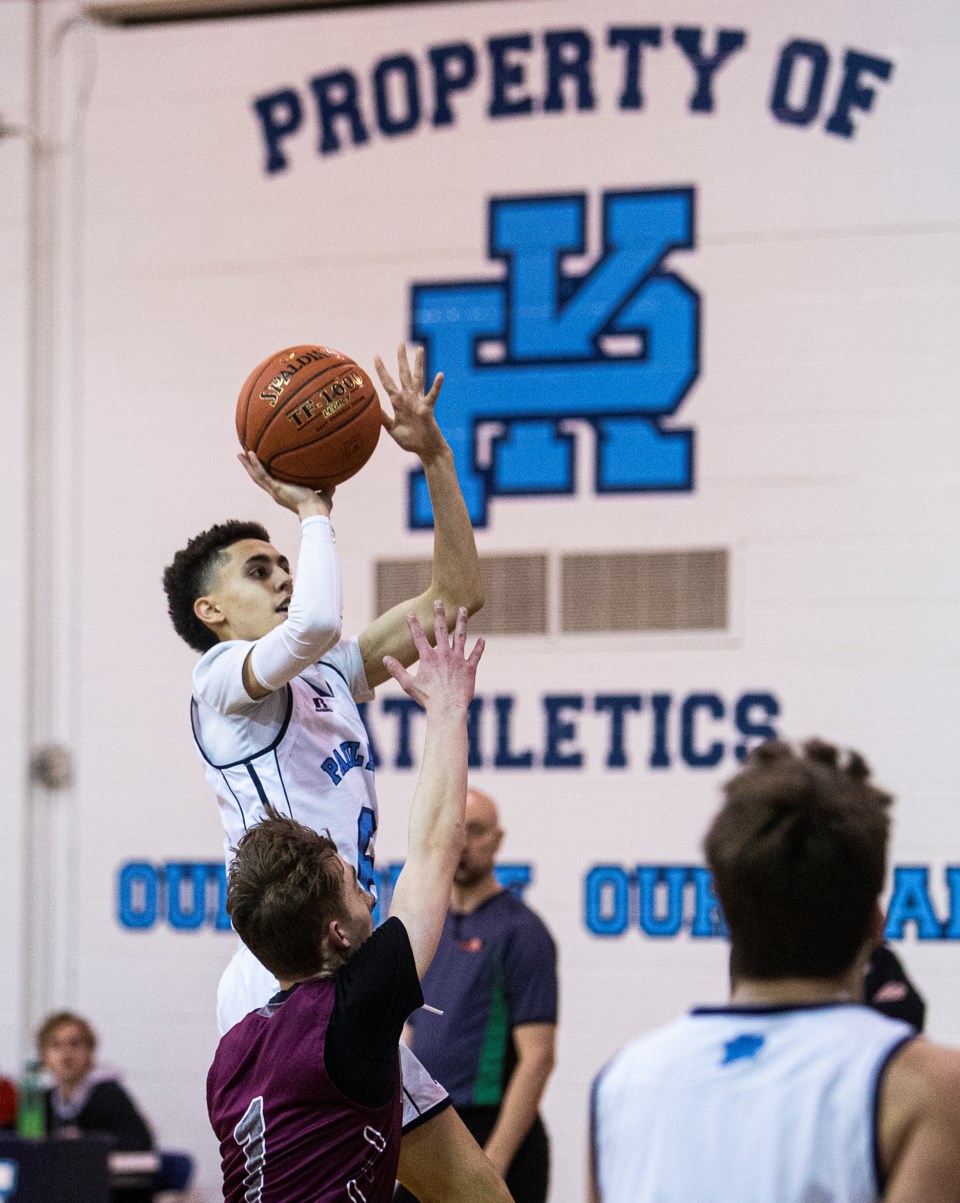 The Paul Kane Blues are back where they belong as a division two championship contender in metro Edmonton men’s basketball.

Last year’s division two finalists at 13-1 are undefeated in four games in league play after their ill-fated attempt at division one status in the preseason.

“We proved in our first tournament of the year that we have the power to compete in div one, but we played some good teams in the play-in round and we just didn’t come out hard enough so now we want to really prove to the rest of the league why we wanted to play in div one,” said Grade 12 forward Ryan Holmes after Monday’s 89-70 win over the J. Percy Page Panthers at Paul Kane.

Highlighting the fifth-place 3-1 record for Paul Kane at the 22nd annual Mike Dea Classic, a 16-team tournament hosted by the St. Francis Xavier Rams, were victories by seven-point margins against a pair of division one teams in the Jasper Place Rebels, the defending 4A provincial champions, and Strathcona Lords.

However, the play-in ability round were losses of 83-75 against the St. Peter the Apostle Spartans of Spruce Grove, 65-49 against the Leduc Tigers and 79-75 against the Holy Trinity Trojans.

“Honestly, the other teams were just more prepared than we were. Our head coach (Evan Eger) was gone for the week (at a family wedding in Mexico) before the play-in round and that’s tough, especially with lots of new guys coming in this year,” said Holmes, one of six returnees from the 21-3 team on this year's 14-player roster that includes 10 Grade 12s.

Paul Kane’s second tournament was a sketchy seventh-place finish out of eight teams at the 27th annual Totem Hoop Classic with losses against a pair of division one teams by 15 points against the host Ross Sheppard Thunderbirds and six points against the Edmonton Christian Lions before prevailing in overtime by four points against the Aden Bowman Bears of Saskatoon.

With another season in division two, Paul Kane has rebounded mightily with an average margin of victory of 15.3 points.

“After the slow start with the play-in round and the second tournament, we started to get a feel for the game more and each other as a team,” Holmes said. “Our depth played a good part in that because we were able to sub in guys.”

At the Christmas break, Paul Kane shared first place with the Panthers and Strathcona Christian Academy Eagles at 3-0 so Monday’s result sets the stage for today’s big game against the Eagles at 5 p.m. in Sherwood Park.

“I don’t know much about them, but defence is going to be a huge key as well as coming out hard,” Holmes said. “It’s going to be all about maintaining energy throughout the game.”

It’s an important week for Paul Kane against tough opponents.

“These are the better teams in our league so we’ve got to show that we’re a stronger team and we can dominate,” said Stefan Marano, the team’s only Grade 10 player. “But the main thing is we respect these teams. We’re coming out with the mentality that we’re not going to take them lightly.”

Paul Kane was never in any serious trouble against the Panthers while rolling up leads of 20-9 at the end of the first quarter, 48-29 at halftime and 74-48 after three quarters.

“We came out strong and then we had our downs in the second quarter, but we just stayed composed throughout the game and near the end we started picking it up by hitting our shots and playing as a team,” Marano said.

The Panthers strung together very few runs and relied heavily on three-pointers with eight in total.

“We knew they had a high powered offence and we really focused on shutting them down,” Holmes said. “We really take pride in our defence and we’ve been working on it day in and day out and we showed that tonight.”

Paul Kane gradually pull away from the Panthers with steady of rotation of players off the bench.

“We got into foul trouble with some of our key guys so being able to sub in guy after guy allowed us to stay in stride,” said Holmes, who deposited 10 of his team-high 17 points in the second quarter, including back-to-back threes 22 seconds apart to make it 33-26 with 3:33 left in the half.

“It was just running through our offence that got me some open shots and once I hit those two open threes that really got me in a flow on offence after I was scoreless in the first quarter,” said Homes, 17.

Vergado finished with 12 points and his basket off a nifty dish by Holmes to extend the lead to 35-26 was part of a 14-point run in the second quarter.

Marano’s nine points featured two of the biggest baskets for Paul Kane and both were buzzer beaters.

“The first one I was kind of dribbling up and taking on that one defender when I saw the clock so I just launched it from half way. I didn’t think it was going to go in, but it went right through,” said Marano, who was mobbed by teammates after the three-pointer to end the first quarter.

His second beat the shot clock basket toward the end of the third quarter and it drew a standing ovation from the Paul Kane bench.

“We were running a press so I just pushed a guy and I stole it and laid it up with not that much time on the clock,” said Marano, 15.

Last year’s standout with the St. Albert Physical Education Council Tier I junior high champion Richard S. Fowler Falcons has been equally as good on the senior Blues in his high school debut.

“At the start it was a big step up, but now I'm getting used to it so it’s really fun,” said the silky-smooth guard. “I’ve had to improve everything with my game, like speeding all my dribbles up and getting my shots off quicker because the game is much faster now. You have to play with that speed now.”