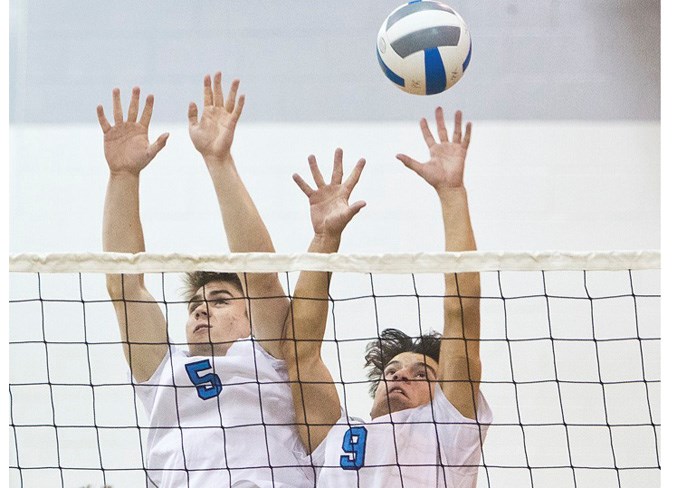 The Paul Kane Blues are more than a bunch of dudes wearing soccer jerseys on the volleyball court.

The No. 2-ranked 4A team in the province is far superior than the motto on the back of the players’ warm-up T-shirts with 20 wins in 26 league and tournament matches.

“We can go really far,” declared Grade 12 co-captain Bryce Neuls, the rat-a-tat hammer that pounds out the points for the metro Edmonton division one co-leaders. “So far this season I don’t think we’ve actually ever played at 100 per cent in all aspects of the game in terms of playing the best we can so if we have a game like that then I don’t think there is a team in this league that we can’t beat.”

Paul Kane, an original member of the metro league in 1988, has never been ranked as high as it is right now in men’s volleyball and the senior team’s only championship in school history was in division two in 2016.

“Every team is going to be out to beat us now so we’ve got to remember that and work our hardest and try and keep our place in the rankings,” Neuls said.

The Alberta Schools’ Athletic Association’s first ranking period lists the William Aberhart Orange at No. 1 and four division one opponents for Paul Kane are in the top 10: No. 2 Strathcona Lords (3-2), No. 5 Harry Ainlay Titans (5-0), No. 6 Archbishop Jordan Scots (3-2) and the No. 9 Jasper Place Rebels (2-3), last year’s champions and 4A provincial gold medallists.

“In that very first set we came out banging. We played really well, but we just didn’t keep it up,” Neuls said. “Second set we were kind of expecting the same thing, but we weren’t playing up to our expectations and we gave them a bit of hope and they came back and beat us.”

Another early season highlight was winning the 10th annual Boom Volleyball Classic last weekend at St. Francis Xavier High School and the final was a three-set victory against the Barrhead Gryphons of the North Central zone and gold medallists at the last two 3A provincials.

Previous results at the Boom were a number of second- and third-place finishes before the breakthrough performance by Paul Kane in its third tournament after two third-place showings.

“All the coaches and the players were very happy to win the tournament,” said Grade 12 co-captain Milan Ogar. “It’s one of the first steps how this season is going to go.”

Paul Kane has positioned itself to make a serious run at the division one banner and competing at provincials Nov. 21 to 23 at Jasper Place.

“This has been a pretty good season for so far for Paul Kane,” said Ogar, noting, “we’ve been gradually getting better” as the season has progressed. “I’m very glad with the outcomes so far, but it’s a little early to celebrate these kind of victories. We’ve just got to keep pushing hard.”

Paul Kane is also piling up the wins without Owen Cooke, a Grade 12 standout who is out for the volleyball and basketball season with a leg injury and is helping head coach Ben Grabia and assistant Andre Charrois with bench duties.

“We have a few powerhouses,” said Ogar, a potent power hitter. “Every player is able to bring a different aspect to the team. We’ve got guys that are absolutely bangers out there, we have guys that are really consistent and smart, and we have other guys that bring out the best in everybody.”

“Offence is probably our strongest suit and that’s why we’re at the top right now,” said Ogar, 16. “Our defence is one of those things that we’re going to keep working on and it’s something that we showed very well in this last game and of course it’s going to keep improving.”

In the first set, the longest run was five points by Shep to lead 14-11 and towards the end Paul Kane tied it up three times after going ahead 20-19. The last two points by Shep were a serve out of bounds by Paul Kane and a point off a block on Neuls.

The next set ended with six straight points after Paul Kane built up leads of 6-1, 9-3, 15-10 and 17-13. Shep tacked up four consecutive points to knot it at 18 and after pulling even at 19 a serve into the net gave Paul Kane the ball to wrap the set up. The last three points were by Mathew Hogue’s block, a tap-down by Neuls and a kill shot by Emmett Neuls, the Grade 10 brother of Bryce.

In the third set, at one point it looked like a runaway at 11-4, but once Shep pulled to within 18-16 Paul Kane quickly closed it out with unreturnable serves and Bryce’s unstoppable smashes.

Cole Seguin’s strong net presence played a major role in the fourth set with a handful of points down the stretch. Ogar, Hogue, Emmett and Rheece Moss also contributed to the scoring attack while Bryce continued smoking the ball and one of his point shots was the hefty drive from the right side that stuck into the floor in front of Shep’s left sideline stripe to make it 23-19.

“It was a little weak in some areas, there are some areas we still can improve on especially defensively, but overall we played pretty good. We worked really well together as a team which led us to the win,” said Bryce.

The six-foot-five swinger was the finisher on several feeds from Moss, a Grade 10 setter, as the primary point producer against Shep.

“It all starts with a good pass and a good set. It’s almost hard not to bang the ball in most situations like that,” said Bryce, 17, who is committed to the Alberta Golden Bears next season.

Paul Kane’s next match is 6:30 p.m. Monday against the Rebels at Jasper Place.