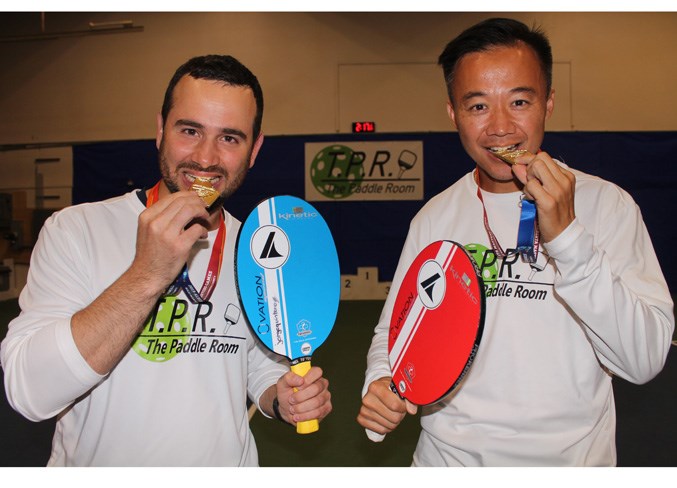 PICKLERS – Jorge Quintero, left, and Vinh Ngo took a bite out of the competition as pickleball gold medallists at the inaugural Alberta Masters (30-plus) Games in Rocky Mountain House. The owners of The Paddle Room pickleball club in Campbell Business Park swept seven best-of-three matches in the 4.0-plus category in men's doubles. JEFF HANSEN/St. Albert Gazette

A St. Albert duo tasted victory while getting pickled at the recent Alberta Masters (30-plus) Games in Rocky Mountain House.

Jorge Quintero and Vinh Ngo, owners of The Paddle Room pickleball club in Campbell Business Park, drained the competition while going undefeated in the 4.0-plus category in men's doubles.

“It was a great accomplishment for us,” said Quintero of the gold-medal victory at the inaugural province-wide Games that featured approximately 1,000 Albertans 30 years and older in 14 summer sports.

The seventh consecutive best-of-three match Quintero and Ngo swept was the final against members of the Parkland Pickleheads.

Each game in a match was capped at 11 points instead of 15 because of weather concerns at the Games and the 4.0 classification was the highest level in the pickleball tournament instead of the 5.0 standard.

The 30-plus age restrictions allowed Quintero, 34 and Ngo, 46, to enter the Games since a variety of Master sporting events are typically for older participants.

The Games also marked the third tournament triumph for the Quintero/Ngo pairing after winning the 5.0 categories at the Royal Glenora and Spruce Grove since joining forces after opening The Paddle Room in November of 2018.

Upcoming is a tournament next month in Westlock.

“We started playing together as a team and we did really well,” Quintero said. “We’re going to keep on doing it.”

Pickleball combines the elements of tennis, badminton and table tennis, and is played indoors and outdoors on a badminton-sized court with a slightly modified tennis net.

Players use a paddle to hit a plastic ball with holes. Matches in singles and doubles tend to run between 30-minutes and one-hour long.

“Whether you have a sports background or not, you do pick it up really quickly so that is what’s really fun and good about the sport,” Quintero said. “It’s not like any other racquet sport where it takes like almost years to get better. It’s an easy sport to get started and once you learn the rules you start having fun within five or 10 minutes.

“You can also take it to any level you want from beginner to competitor.”

It’s also easy on the body, according to Ngo. “If you can play competitively in tennis, or whatever sport, at an older age like 40, 50, joints start to hurt so it’s much more of a forgiving sport,” he said.

Ngo discovered pickleball “by accident” while working out at the Terwillegar Community Recreation Centre.

“It caught my curiosity,” Ngo said of stumbling across a weekday afternoon session featuring hordes of pickleheads. “It looked intriguing so I went and got a paddle and once I started hitting it felt like playing table tennis and right away I was hooked. I tried it more and more and I really enjoyed the social aspect of the game. You get to meet great people. They enjoy hanging out and having a few laughs. It’s more giggling on the courts than anything. It’s really, really fun.

Quintero made the transition from a squash player to a pickleballer two years ago.

“The company that was sponsoring me in squash picked up pickleball and started selling their gear so one day they said here’s a paddle and go try it out, and that’s how I started. It was the first time I heard the name and I had no clue what it was, but they showed me the court and how it’s played,” Quintero said. “At first, I saw a whole bunch of old people playing and I was like maybe this is not good enough for me, but a lot of the younger people are playing it now and they’re taking over.”

The age range at The Paddle Room among the 200-odd regulars, including the 100-plus membership, stretches from seven to 81.

“We’ve got them all,” Quintero said. “We have about a 50/50 split between younger people and older people. We wanted to get the younger generation going as well as keeping the older people playing.”

Ngo noted: “There's lots of mixture and that’s one great thing about it. The grandparents can play with the grandkids.”

The popularity of pickleball is on the rise in Canada, especially with the snowbirds playing it in the United States during the winter and continuing on with the sport back home in the summer while also bringing newcomers on board.

“It’s growing so much here,” Quintero said. “It’s getting televised all over in the States, they televised it on ESPN, so there is a lot more exposure.”

As for pickleball becoming the next sport in the Olympics, “I can see it all ready,” Quintero said

“I would say it will be in the Olympics in the next 10 years,” Ngo predicted.