Halfway through the Alberta Cup fixtures, the Fantastic Firsts are leaving a trail of destruction towards another title shot at provincials. The sixth straight win and second shutout by St.
0
Jun 17, 2009 12:00 AM By: Jeff Hansen 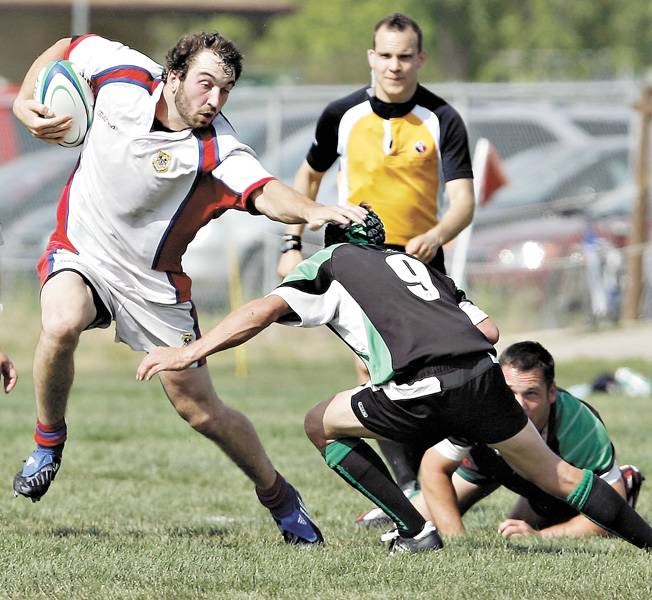 Halfway through the Alberta Cup fixtures, the Fantastic Firsts are leaving a trail of destruction towards another title shot at provincials.

The sixth straight win and second shutout by St. Albert's first 15 was Saturday's 51-point thrashing of the Calgary Saracens at the St. Albert Rugby Football Club.

"We definitely brought it up a notch and had our foot on the gas pedal from the get-go, said captain Graham Noren. "We've got to come out every game like that and put teams away."

Despite a few hiccups, last year's pennant winners and provincial finalists look unbeatable in their second season of premier after capturing the Alberta Rugby Union second division crown in 2007.

"Our biggest weakness is reading our own press headlines sometimes and we get ahead of ourselves. We go into games like last weekend [39-15 against the winless Lep/Tigers] and take for granted we're playing in the first division in Alberta premier rugby and on any given day, any team can come out and beat any other team regardless of their record," Noren said "We've been known to come out pretty quiet and lackadaisical for one half or the other and we've got to be able to put a full 80 minutes together to put teams away this season. If we can do that it looks bright for us but if we can't get that momentum going the full game, there are teams that can beat us."

Averaging a hefty 40 points per win, the firsts haven't missed a beat after going 13-3-1 overall in last year's return to premier after several half-hearted attempts at the elite level.

"We were a powerhouse team last year but we didn't have the depth. We were always worried about injuries and bad things that might happen during the season. This season we haven't had the same team all season, which goes to show how strong our club is getting as a whole. We've got people backing everyone up," Noren said. "As much as we fight for spots, we're always pushing for each other. We're all really good buddies and that comes with being such a young team. We support each other. If you haven't been training so well one week, you'll sit out but at the same time you'll be cheering for the guy who took your spot."

Regardless of how the rest of the year unfolds, it's what St. Albert does in the playoffs that matters most. All signs point to a rematch with the perennial champion Calgary Saints for provincial honours Sept. 12 at Ellerslie Rugby Park.

"That's a team built for big games and we came away from that loss in the final [24-10] with so much experience. We learned that we can get to that step and play rugby with any team this in province," said Noren, 25, who props for the biggest and toughest pack in premier. "Sure we beat them two weeks ago [come-from-behind 35-12 win in Calgary] but we've got to be able to win when it comes down to the provincial final and they've proven that they can do that."

One of the few newcomers to crack the young and talented line-up is English import Karim Lynch, who is coming off a losing season with the Havant Rugby Club.

"To come to a team like this with a winning mentality is very nice," said Lynch, 20, a versatile player with deceptive speed and strength. "Even when you're winning games when they're bad, that's another good sign of a good team and we've done that."

Case in point was the second half rally against the Lep/Tigers after a shaky start left the firsts trailing at the break.

"It was mistakes. We just didn't gel. Nobody was talking. The effort was just terrible," Lynch said. "This week the lads played a lot better together and were talking. We got the ball out, played the simple stuff and we won."

The firsts racked up eight tries against the offensively challenged Saracens (1-4). Kicker Aaron Takel hit four conversions, including a couple of toughies from Ashley Hanson distance. He opened the scoring in the 15th minute on a penalty kick from inside the 22-metre line.

A red-hot Jake Robinson produced two of his three tries late in the game at scrum-half, including a dandy chip-and-chase for points. Eight-man Byron Elliott crossed the try line twice before leaving the match with an upper body injury. His replacement, Dominik Jenni, would go on to score a cheeky try.

Also running in tries was Lynch before halftime to make it 22-0 and Matt Herod in the second half to extend the lead to 34 points.

The closest the Saracens came to scoring was in the 22nd minute on a missed penalty kick.

"It was a very good game. We've got a lot of wrongs right from last week. The team gelled a lot better together this week," said Lynch, who dropped the ball on a sure try early in the game on a pass by Edwin Shimenga.

After playing in the lowest pro league in England at Havant in division three, Lynch has been pleasantly surprised by the calibre of Alberta premier rugby.

"It's pretty similar standards to what I was playing and that's a very good standard."

Lynch decided to spend the offseason in St. Albert after his Havant teammate and former St. Albert player of some note, Harry Hessman, hooked him up with some contacts in the rugby community.

"It's worked out really well. It's been tremendous. Everyone is just a little more friendlier than back home," said Lynch, who hails from Bournemouth on the south coast of England. "Everyone is so close on the team and that's helped St. Albert to become a very good team."

The next match is this Saturday at home against the Calgary Hornets at 2 p.m. In last year's semifinal the Hornets gave St. Albert all it could handle in the 26-20 home-field decision.