Raiders better than the rest 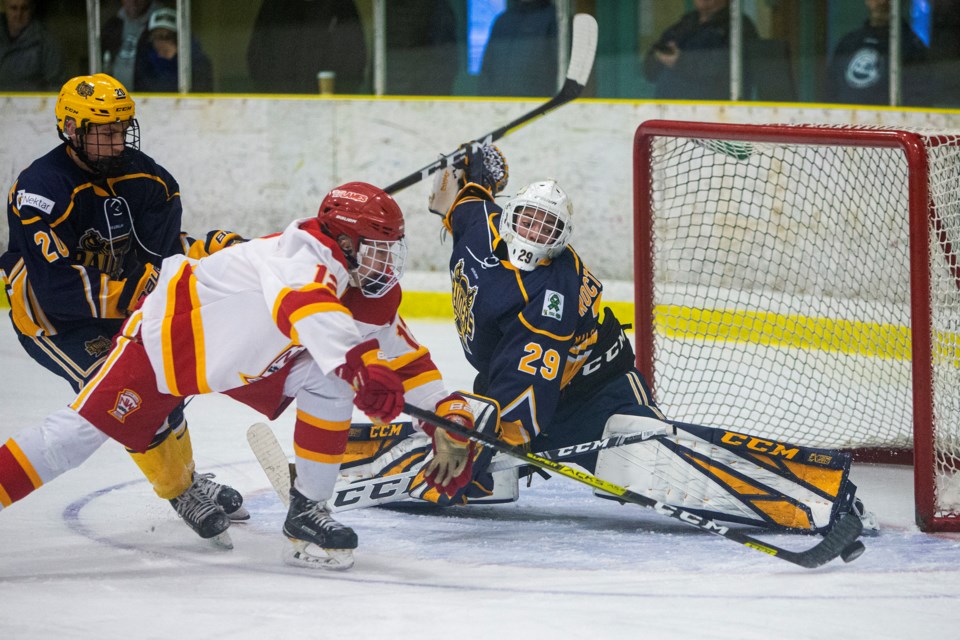 SPLIT SAVE – Andreai Proctor-Ramirez of the St. Albert Nektar Raiders stretches out to deny Matthew Mazzocchi a goal as Gage Lajeunesse provides defensive support on the play in Sunday's 4-1 win over the Calgary Flames at Jarome Iginla Arena. The Raiders (18-1-3) enter the 42nd annual Mac's tournament in Calgary as the No. 1 team in Alberta Midget AAA Hockey League. The first game for the defending Mac's Cup champions is 9 a.m. Friday against the Calgary Royals. CHRIS COLBOURNE/St. Albert Gazette

The St. Albert Nektar Raiders refuse to rest on their laurels as the No. 1 team in the Alberta Midget AAA Hockey League at the Christmas break.

“It feels good, but we’re never really satisfied. We’re always trying to get better to stay on top,” said defenceman Breck McKinley of the 18-1-3 Raiders. “We outwork every team we play. We get pucks deep and keep hounding on them. We play heavy hockey and no team can handle it.”

The 10th win during an 11-game unbeaten streak was Sunday’s 4-1 decision against the Calgary Flames (12-7-5) at Jarome Iginla Arena.

The day before against the visiting Lethbridge Hurricanes (12-8-3), the Raiders battled back from a two-goal deficit to salvage a 4-4 draw after winning nine straight since the 2-1 loss to the Sherwood Park Kings (6-11-5) Nov. 6 in St. Albert

“We picked it up today and we showed what our team is made of. (The tie) was a little bit of a setback, but we brought it back in a big way,” said left-winger Jaxon Dube of the bounce-back effort against the Flames. “It’s a good start going into the Mac’s.”

The top teams in the five pools and three wild cards qualify for the quarter-finals. The final is Jan. 1 at the Saddledome.

“It’s obviously going to be a lot higher pace there because it’s such a good tournament so we’ve got to keep on playing like we’re playing right now,” McKinley said.

At last year's Mac's, the Raiders gutted out six wins in seven games and five victories were decided by one goal with late-game heroics.

The acts of resilience included the 3-2 quarter-final in double overtime against the Canadian Athletic Club and the 4-3 final against Lethbridge.

The only loss was 4-3 in pool play against the Vancouver NE Chiefs.

“It’s a hard tournament to play in. It’s a constant grind of just staying focused and if we do the right things we can succeed in that tournament. We have that type of team to do it. We’re hard to play against. We’re big and we just don't stop competing,” said Dube, a returning player along with captain Mathieu Gautier, defenceman Tye Pedersen and netminder Andreai Proctor-Ramirez from the first St. Albert male team to win the Mac’s Cup.

The only other St. Albert team to reach the men’s final was the 1990 Eagle Raiders.

“We have such a great group that we could repeat what we did last year,” said Dube, 16, a Grade 11 Paul Kane High School student.

The weekend homestand started off with a bit of a hiccup as Lethbridge struck four times in the opening 11 minutes of the second period on the strength of two power-play goals 43 seconds part with Maddux Nollski serving a five-minute boarding major.

Shots were 15 apiece in the period as Carson Ironside was replaced by Proctor-Ramirez with the Raiders down 4-2.

Ronin Pusch made it a one-goal contest with 7:47 to go in the second and Evan Forrest potted the equalizer on the power play with 4:21 left in the fame.

Pedersen leads all AMHL defencemen in assists with 14 and points with 18, which is second best on the Raiders.

The final shot count was 40-30 for the Raiders as Proctor-Ramirez came off the bench to make 15 saves.

“We came out a little bit slow. Our PK was struggling a little bit and they got some (power-play goals) and we had to rally back and get a few to get the tie,” McKinley said.

Against the Flames, Pusch knotted the score on the power play with his fifth goal in three games and ninth of the season.

The first of two goals by Gautier was potted on the penalty kill to break a 1-1 tie in the middle frame.

Gautier leads the Raiders in scoring with 24 points.

The Raiders were without the services of Nollski and Drew Kuzma, a pair of forwards, because of suspensions stemming from game misconducts against Lethbridge.

“We had a little bit of a slow start, but after that we were pretty good. We were all over them. They couldn't really handle us,” said McKinley of beating the Flames.

The Grade 11 St. Albert Catholic High School student is tied for second behind Pederson in scoring among AMHL defencemen with 15 points.

McKinley, 16, joined the Raiders at the Jan. 10 trade/roster freeze deadline from the St. Albert Flyers in the Alberta Minor Midget AAA Hockey League to replace Robert Kincaid, who was called up and signed for the rest of the 2018/19 season by the Camrose Kodiaks in the Alberta Junior Hockey League.