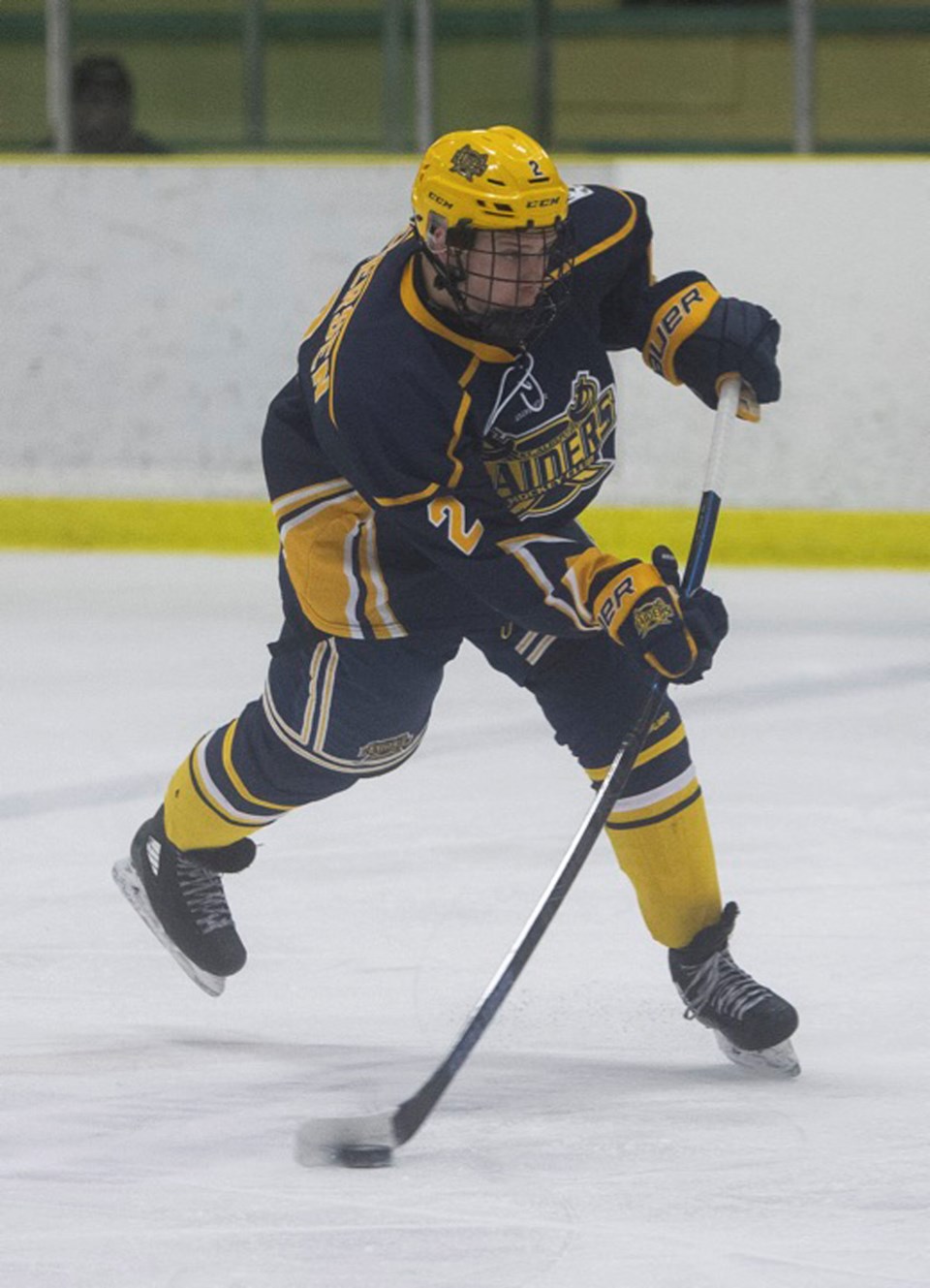 PULLING THE TRIGGER – Tye Pedersen, a defenceman with the St. Albert Nektar Raiders, shoots the puck for the No. 1 team in the Alberta Midget AAA Hockey League. Sunday the Raiders (14-1-2) host the south division leading Calgary Buffaloes (13-3-2) at 2:30 p.m. at Jarome Iginla Arena. Last weekend the Raiders edged the Buffaloes 2-1 at Red Deer in the first meeting between the teams since the 2019 best-of-five provincial final the Buffaloes won in three games. CHRIS COLBOURNE/St. Albert Gazette

The top two teams in the Alberta Midget AAA Hockey League are on a collision course for the second Sunday in a row.

The rematch between the St. Albert Nektar Raiders and Calgary Buffaloes will impact the league rankings when the 2019 provincial finalists faceoff at 2:30 p.m. at Jarome Iginla Arena.

"We're going to compete hard against the Buffs and hopefully we’ll come out on top again,” said captain Mathieu Gautier at Thursday’s practice.

Incentive was running high to beat the Buffaloes after the Raiders lost the best-of-five provincial championship in three games to the Calgary squad.

“It was a hard-fought game,” Gautier said. “We knew they were going to be good, but if we played our game and played to our strengths we would come out on top.”

Gautier, a centreman, netminder Andreai Proctor-Ramirez and defencemen Breck McKinley and Tye Pedersen are returning Raiders from the provincial silver medallists that suffered overtime losses of 3-2 (the winner was scored on a penalty shot) and 4-3 before the 7-4 series ender.

“They really wanted it because of what happened in the playoffs last year,” said right-winger Evan Forrest. “All the boys wanted it too. You want to be number one. They’re the team everybody thought (was) going to beat us, but we showed them that we’re the top team in this league and we’re going to prove that every night.”

Both teams finished first in their respective divisions last season – 19-11-4 for the Raiders in the north and 24-7-3 Buffaloes in the south – and are in the same positions again at the halfway mark in league play.

They're also winning in different ways. The Raiders are averaging a stellar 1.29 goals against and Buffaloes are scoring a league-high 4.5 goals per game.

In the previous clash, the Raiders scored twice before the Buffaloes replied halfway through the third period.

“We pressured them really hard and kind of took the pace to them early and that’s a big reason why we won. We also stuck to our game plan,” Forrest said. “It was really awesome.”

Proctor-Ramirez (8-1-1), who leads all AMHL netminders with a 1:10 GAA, .955 save percentage and three shutouts, stopped a game-high 32 shots, including 13 in the opening period as the Raiders killed off two penalties.

“We took a lot of penalties (four compared to six by the Buffaloes) and our PK was really strong that game. It’s been strong all year so far, so that helped us,” said Gautier, noting the winner by Ronin Pusch was slotted on the power play. “Our special teams really helped us throughout that game.”

Forrest opened the scoring before the 11-minute mark with his fifth goal.

“Tye Pedersen got the puck at the point and shot it and it went off the pad (of netminder Jared Whale) and I read where the rebound was going to come and the defenceman was in between me and the puck and I managed to jump around him and smacked at it. I got enough juice on it and luckily it went in,” Forrest said. “It was really exciting. To get that goal early in that game was really big and it really helped the boys get going and stay together and stay focused throughout the game.”

“Breck McKinley gave me the puck coming into the zone and I kind of button hooked and then I saw the defender was coming down on me so I button hooked the other way and then I saw Ronin back door so I gave him a pass and luckily he can handle the puck and he put it in the net,” Forrest said of the power-play marker with 4:15 left in the second. “That was a really big goal for us too.”

The Buffaloes cut the lead in half while outshot 13-9 in the third as the Raiders finished with 29 shots.

“They got a little bit of life, but we kind of took that life back. We just didn’t really give them much to work with,” Forrest said.

The sixth win in a row was also the 10th in 11 games for the surging Raiders.

“All 20 guys on the team are chipping in and doing their job. Everyone on the team knows they’ve got a job and they’re doing it very well,” Gautier said. “Our special teams have been pretty good this year as well.”

Forrest, 16, described the Raiders as a “super close and super tight” team that “wants to get better every day” at the rink.

“That’s why we’ve started out so well,” Forrest said. “There’s also a lot of positive energy and it’s going to be really good for the rest of the season."

Forrest, 16, is tied for third in team scoring with Gautier with 13 points apiece. The Grade 11 Spruce Grove student joined the Raiders after producing 25 goals and 62 points in 33 games last season as the recipient of the Most Valuable Forward award in the Alberta Minor Midget AAA Hockey League.

The first of five games before the Mac’s Midget AAA World Invitational Tournament in Calgary during the Christmas break for the defending champions is on tap today against the host Sherwood Park Kings at 1:45 p.m.

“They’re the ones that beat us so we want to prove a point. We want to go into their barn and play a good game,” Gautier said.

Winning the 2019 Mac’s Cup as the first St. Albert male team to accomplish the feat in the tournament’s 41-year history gave the Raiders that extra boost to go as far as they did in the AMHL playoffs.

“We have been talking about it a little bit in the room how that helped us a team. We’re still focusing on the games before we go there, but everyone is excited for that opportunity again,” said Gautier, 17, a Grade 12 Bellerose student.