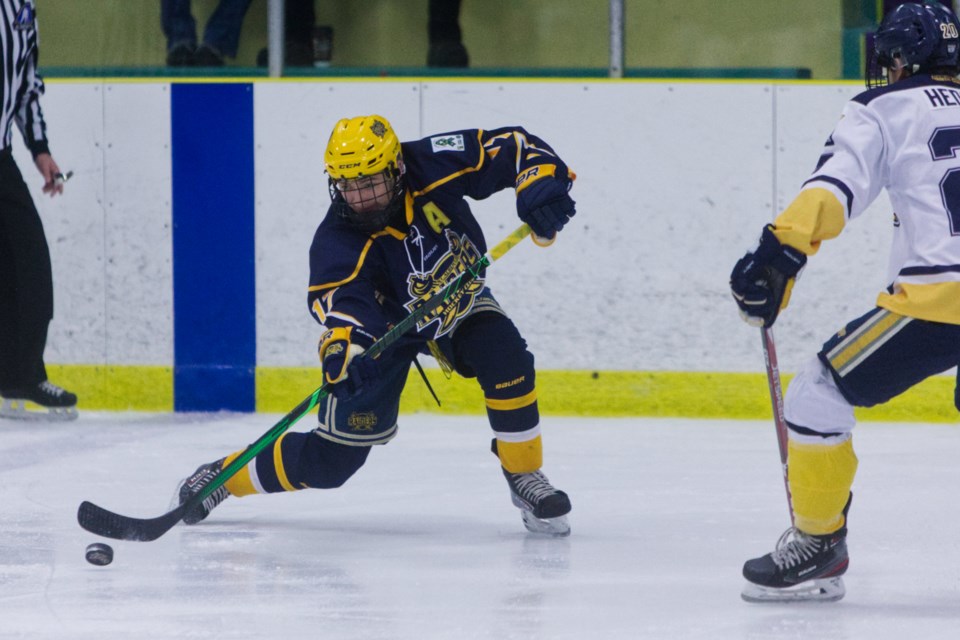 DISTRIBUTOR – Assistant captain Breck McKinley of the St. Albert Nektar Raiders looks to dish the puck off against the Grande Peace Storm in Sunday's 3-2 home-ice win in the Alberta Midget AAA Hockey League. The Raiders (6-0-2), the top team in the north division, host the Okotoks Oilers (5-2) of the south division at 8 p.m. at Jarome Iginla Arena. CHRIS COLBOURNE/St. Albert Gazette

Every game this season, the St. Albert Nektar Raiders have made a point of picking up points in the standings.

“We’ve had a strong start to the season so far. We’ve had a couple of four-point weekends with two wins,” said forward Noah Wilson.

Sunday the Raiders were on the verge on their first loss down 2-1 to the Storm when Evan Forrest scored with netminder Carson Ironside pulled for the extra attacker as Jaxon Dube and Breck McKinley assisted on the equalizer with 1:26 play.

“I picked off the pass at the blueline and I took a couple of strides in and my first shot got blocked and then I just threw it on net and it went five hole,” Reidy said of his second goal and fourth point as a Raider. “It was a big win. We battled back in the last two minutes and it was nice to get the winner.”

The day before against the Northstars (3-2-3), Forrest broke open a 1-1 deadlock with 3:36 left and Wilson’s shorthanded marker into an empty net made it 3-1 with 44 seconds to go.

“It’s good to see our team winning those tight games because those are the ones that matter when it gets down to the stretch run and into the playoffs. You've got to be able to win the close games,” Wilson said.

The results pushed the Raiders further ahead of the Storm (5-2) and Lloydminster Bobcats (5-3) toward a second north division pennant in as many years.

“We’re just trying to get better every game,” Reidy said.

Koehn Zimmer, a U16 Team Alberta forward at last week’s WHL Cup in Calgary, leads the Raiders in goals with five in six games and is tied with Dube and Forrest for the most points at seven apiece.

“We’ve been pretty strong defensive, we just haven't been burying our chances offensively. The opportunities are coming along we’ve just to keep working and scoring some more goals. If we keep shooting the puck they will start to go in and the floodgates will open,” said Wilson, who has contributed three goals and one assist in eight games while alternating between left wing and centre with Reidy as his main linemate.

Wilson, 17, also affiliated last season with the Raiders with no points in five games while producing nine goals and 29 points in 29 games with the midget AA St. Albert Blues.

Reidy, 17, also played in the Northern Alberta Midget AA Hockey League with the 2018/19 St. Albert Source for Sports Crusaders before following his brother Mitchell, a netminder, as a Raider. Mitchell is now stopping pucks with for the junior B St. Albert Merchants.

The trio, along with Tanvir Grewal, a defenceman for the Crusaders, are bringing that tradition of excellence to the Raiders, the 2019 Mac’s Cup champions and AMHL provincial finalists.

“I just want to keep winning and try and do it at this level now,” said Reidy, a versatile winger. “The year before (with the midget 15 St. Albert Flyers) I also affiliated with Crusaders the whole playoffs when they won and last year we had a really strong team again with good goalies. We just played as a team mostly and got wins.”

Tonight the Raiders host the Okotoks Oilers (5-2) at 8 p.m. and Sunday’s game in Lloydminster starts at 2 p.m.

“The goal is to get four points so we have to beat Okotoks, who is good, and then Lloyd is good so it’s a big weekend,” said Reidy, a Grade 12 Bellerose student.