Rangers fit to be tied

The St. Albert Impact Rangers had to settle for a draw Thursday night despite several chances which they couldn’t convert.
0
Jul 10, 2007 12:00 AM By: St. Albert Today Staff 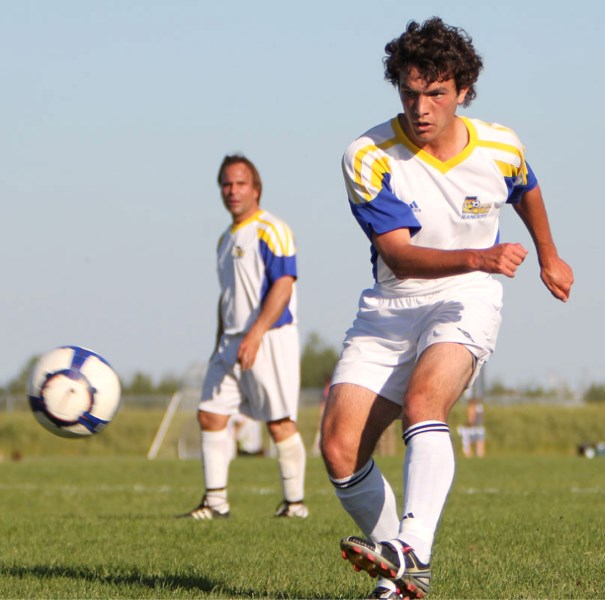 Sal Camminitore of the St. Albert Impact Rangers kicks the ball ahead during Thursday&#8217;s game against Africana FC. The 4-4 draw means the Rangers only have two games left to move up from seventh place and avoid relegation from the premier division.

The St. Albert Impact Rangers had to settle for a draw Thursday night despite several chances which they couldn’t convert.

“It’s pretty frustrating,” said Mike Thomson, who’s been a part of the team for 20 years. “We had two or three posts or crossbars in the first half. There was a lot of emotion on the field today, so I don’t know if we were disciplined all the time within our system. The guys fought to the end.”

Emotions were running high for St. Albert partly because long-time coach Dieter Knobloch passed away June 30 from cancer at the age of 70. His funeral service was held on Tuesday and Thomson was one of two people to give the eulogy.

Midfielder Emmett Keenan, who joined the Rangers a couple of years ago, said it was strange playing without Knobloch on the sidelines.

“It’s pretty hard not seeing Dieter sitting on the sideline yelling at us,” said the 25-year-old. “It’s a different game now. I guess we have to move on.”

That leadership will now have to fall on veteran players like Thomson and defender Jim Casper, who has been on the team nearly as long.

&#147;Obviously, we want to keep the tradition of the Rangers where it&#146;s supposed to be and that starts with the guys who have been here a while and transferring that history and tradition down through young guys, and obviously to the other [St. Albert Impact] division 1A and 1B teams,&#148; Thomson said.

There were four yellow cards given out in the game, including three to St. Albert. Ryan Sebastianelli, who received one in the 82nd minute when he was at the sideline and threw the ball to an Africana player because he thought it was a throw-in, but it was a free kick. The referee gave him a yellow card for throwing the ball. In the 89th minute, Mark McQuaid was given a caution for arguing a call.

Even a Ranger not dressed for the game, Marc Tetreau, who was acting as a coach on the sideline with his ankle taped up, was barred from the field in the second half for arguing a call.

The fourth card was given to Adam Abdo for a late tackle.

St. Albert fell behind in the ninth minute of the game, but responded 20 minutes later when Keenan was the beneficiary of a pass that gave him a wide open net. Just before halftime, St. Albert hit the crossbar twice, including once on a header from McQuaid after a cross from Thomson.

Africana went up 3-1 with two goals in the span of eight minutes in the second half.

In the 71st minute, McQuaid headed in a Thomson free kick to narrow the gap to 3-2 and four minutes later, one of the newest members of the Rangers tied things up with a highlight reel goal. Klaus Figueiredo, a 2008 graduate of Paul Kane High School, streaked into the corner of the 18-yard box, saw the keeper was a little outside of his net and chipped the ball over with just enough room to get under the crossbar.

The offensive outbursts continued shortly after when Fernando Bazin-Owens scored Africana’s final goal after what looked to be a handball. In the 80th minute, Keenan scored his second of the game on a nice give-and-go with McQuaid.

The Rangers now have two games left in the season to move up from seventh spot in the EDSA’s premier division. The Rangers’ next game is against the KC Trojans at Riel Park on Thursday. The Trojans are one point ahead of the Rangers.

“We would’ve been sitting pretty if we would’ve won tonight’s game, but that just puts more pressure on us and that’s what we’ve been doing the last two seasons,” Keenan said. “It’s kind of the same old.”