Revolution FC knocked Storm United from the ranks of the undefeated in the St. Albert Women’s Soccer League in Sunday’s division one showdown.
0
Jun 24, 2009 12:00 AM By: Jeff Hansen 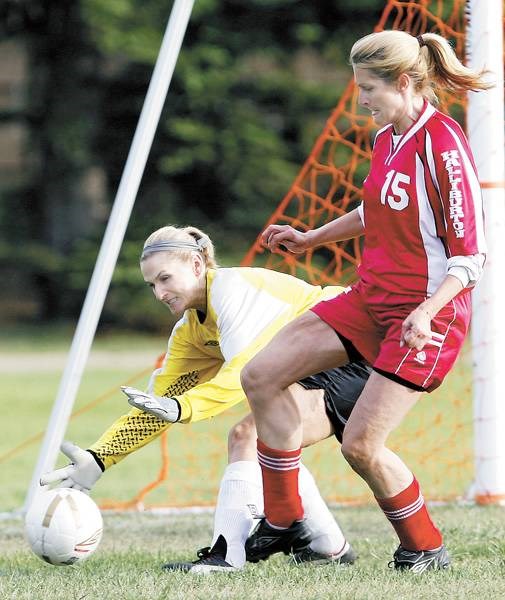 Revolution FC knocked Storm United from the ranks of the undefeated in the St. Albert Women’s Soccer League in Sunday’s division one showdown.

“They’re a really good team. We needed to step up if we were going to win and we did that tonight,” said Allyson Fong, a tower of power in the midfield with one goal and a big assist on Gordon’s insurance marker late in the game. “It was our strongest game so far. We played really well, right from back to front. Our keeper played awesome. It was probably her best game of the year.”

The entertaining affair brought out the best in both teams. They traded quality chances, moved the ball around with authority and marked hard with clean tackles.

The loss was the third in four tilts with Revolution, dating back to the 2007 tier playoff final, a 2-1 Storm defeat. A scoreless draw last year was the closest the Storm came to beating the 2009 World Masters Games team of players over the age of 30.

“We always look forward to playing these guys. There’s that rivalry between us,” said VanRiper, a tenacious midfielder who was parachuted into the backs in a bid to help neutralize Gordon.

The result halted the Storm’s six-game winning streak in which they outscored teams 23-3. Three wins were by shutouts.

“Even though we lost I was pretty proud how we rallied after getting down by two goals,” VanRiper said.

Gordon opened the scoring in the 28th minute with a pistol on a free kick. With Storm keeper Angela Boucher staring into the sun, the Revolution striker fired the ball under the crossbar with pinpoint accuracy.

Ten minutes later, Fong kicked in her fourth goal of the year on a strange play. Somehow the ball rolled past Boucher, who was distracted on the play by Revolution striker Kim Joy. She practically fell over Boucher in a bid to get a foot on the shot.

In the 41st minute, an unmarked Ashley Brandt finished off a brilliant cross by Vincenza Pinos to cut the deficit to one. The goal was Brandt’s seventh to lead all division one players in the Golden Boot scoring race. She was the Storm’s most consistent offensive threat in the loss with a handful of dangerous chances in both halves.

As the first half drew to a close, Jen Andrews and Pinos hooked up on a through ball, forcing Karner to charge way out of her net to block.

“We were wishing a couple of the ones that come close in the first half had gone in for us,” VanRiper said.

In the second half the teams took turns spending prolonged periods in the opposition’s end. Gordon and Fong propelled several balls towards the Storm net at various stages. Karner was also tested periodically by a Storm side desperate to notch the equalizer. Brandt just missed trying to go upstairs on Karner, set up by Tanya Byrne’s dipsy-doodle run through the heart of Revolution’s defence. A few minutes later, Byrne headed the ball over the net on a free kick by Jane Polley that was crossed into the slot by Sarah Crerar.

“We were definitely pushing a little harder in the second half. You have to get a little bit more aggressive when you’re down a goal,” VanRiper said.

With only a few minutes remaining, a great individual effort by Gordon to keep Fong’s pass in play in front of the Storm bench while running down the line resulted in the team’s third goal. Gordon bolted into the clear with the ball and picked a huge hole on Boucher’s left side and the keeper deep in her crease.

“We were pushing pretty hard for one at the end and sometimes that means you give up something in the last couple of minutes like that,” VanRiper said.

The goal was Gordon’s team-leading sixth. Last year she shared the Golden Boot award with Suzanne Gaetz of the Morinville Ladies with 14 apiece in league play.

The win improved Revolution’s record to 4-1-1 for third place.

“We’ve had different people step up in different games and that’s what makes us strong. We’re not defensively and we’re not offensively either,” said Fong, a social studies and gym teacher at Lorne Akins School.

As for the 2008 pennant winners, the Storm are hoping to repeat as first place finishers for a second trip to the tier IV provincials. Last year they failed to win a game at provincials, and then got blown away by Morinville 5-0 in the tier I semifinals.

“It’s tough competition at provincials. It’s a little different than the soccer you’ve been playing all summer, at least it was last year,” said VanRiper, a vocal figure on the pitch yelling encouragement to her teammates. “We’ve seen what it’s like now and we want to get back there and do better than last time.”