Roberts best of the best

Actions speak louder than words for Jordan Roberts. His play on the pitch for the St.
Dec 4, 2018 4:05 PM By: Jeff Hansen 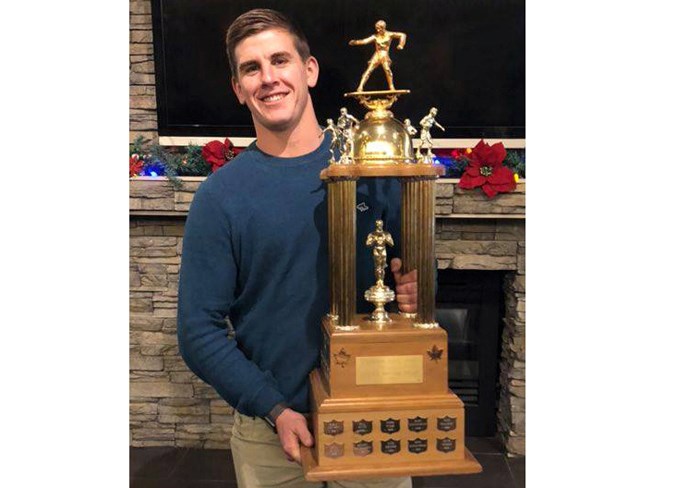 MVP – Jordan Roberts of the St. Albert Rugby Football Club was awarded the Labatt's Cup as the most valuable player in the Edmonton Rugby Union and was recognized as the Rugby Alberta senior men’s player of the year. The SARFC captain and eight-man of the provincial premier champions was also the top player for the Prairie Wolf Pack at the Canadian Rugby Championships this year.

His play on the pitch for the St. Albert Rugby Football Club spoke volumes as the modest and unassuming captain of the Labatt’s Cup provincial champions was honoured as this year’s most valuable player in the Edmonton Rugby Union and Rugby Alberta.

“I don’t really know what to say,” replied Roberts when asked to sum up the multiple MVP accolades. “It’s good. Unexpected but good.”

“It’s always nice to get a personal award in a league after a hard season,” said Roberts, a standout at eight-man for SARFC.

“You bet I was. Jordan Tait got our team MVP for St. Albert so the league award was definitely unexpected that’s for sure,” said Roberts, last year’s MVP recipient in his first season of rugby in Canada. “He played lots of different positions for us. He was a pretty key part for the team.”

Roberts, 26, was the Gorilla Glue that held the SARFC premier men’s team together through thick and thin during .500 season in the Alberta Cup fixtures before a shock and awe playoff march culminated in the fifth provincial championship since 2010 and the first since the 2014-16 three-peat.

“I just tried to do everything I could well, like my basic roles like captain,” said the New Zealander from Blenheim, situated in the Marlborough region at the top of the South Island, with ties to the Mahurangi Rugby Football Club.

“If the team wins I win so it’s probably the best season of rugby I’ve had,” added Roberts of the rebranded Great Firsts snowshoeing past the Strathcona Druids (5-6) in the ERU semifinal 34-12 at SARFC and the 2017 provincial champion Nor’Westers (10-2) in the Ken Ann Cup north final 29-7 at Ellerslie Rugby Park before conquering the Calgary Rams (13-2) in a chilly provincial final 42-26 in the Cow Town to finish 8-5 overall.

“We definitely came on right at the end of the season. We were sort of hanging in there and we were lucky enough to get the high playoff game and then I think we adapted to the weather conditions obviously with all the snow better than any other team that we played in the playoff run so that was  a major thing really. We just got it done.”

Roberts is also the second SARFC player in a row to be fêted by Rugby Alberta as its top male performer. Gilmour was the inaugural 2017 MVP.

“Again, it was unexpected but that was great,” said Roberts, who was presented with the Rugby Alberta certificate of merit at Saturday’s AGM banquet in Calgary.

Roberts also shone bright as the team MVP of the Prairie Wolf Pack at this year’s Canadian Rugby Championships.

As for his strengths as a rugby player, Roberts said: “I think I’ve got a good work ethic around the pitch so my fitness is good. I can get around the pitch for 80 minutes which is good in a summer rugby league like this. Summer rugby is hard and fast so you’ve got to be fit to keep up otherwise you get left behind.”

Roberts is another in a long line of imports who calls SARFC his home away from home.

“It’s been a great team to play with. Lots of good people in the club as well as the team. Simon Hill, our president, has been great. Jeremy (Kyne), our coach, has been great this season and then there is all the guys that have been at the club for a long time like Gus (Angus MacDonald) and Jake (Robinson) and Duncan (Maguire) and all those boys. They definitely make the game fun,” said Roberts, who is going through a lengthy process to become a Canadian citizen.