Three players from the St. Albert Rugby Football Club’s youth program made U14 Alberta for next month’s tournament festival in Toronto.
0
Jun 17, 2009 12:00 AM By: St. Albert Today Staff 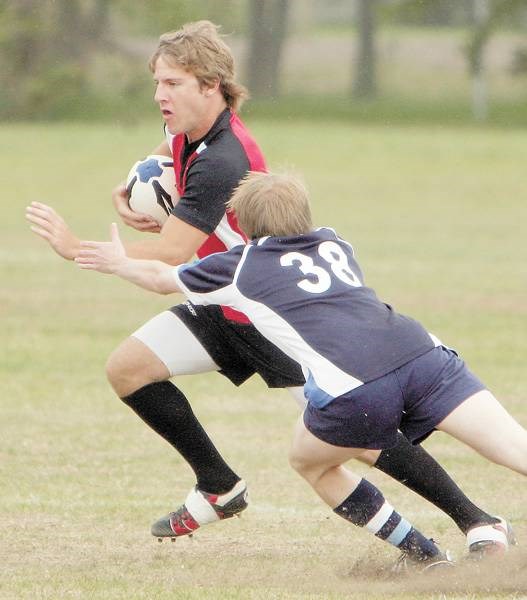 Three players from the St. Albert Rugby Football Club’s youth program made U14 Alberta for next month’s tournament festival in Toronto.

Named to the 31-man roster were Jesse Shirton, Rudy Spector and the injured Brett Clow (broken collarbone). It‘s the first time St. Albert has had representation at the U14 rep level.

Alberta will play British Columbia and two Ontario teams in the tournament’s round robin draw.

The Edson Axemen carved up the St. Albert Exiles for eight tries and five conversions in Saturday’s 50-5 blowout at Leading Edge Physiotherapy Field.

The Exiles (3-3) trailed by 24 points late in the first half when veteran forward Eric Wynychuk was red carded for kicking at the ruck. The Axemen would record another try before the half ended.

The loss ended a modest two-game winning streak for St. Albert’s newest third division men’s team. A number of players from the regular thirds (4-2) side helped bolster the Exiles line-up.

The Exiles carry a wide range of players in ages and abilities. Several have come out of retirement to play for the team. In their last win, 20-7 over the Leduc Crude (1-4) June 5, the man of the match with one try was grandfather-to-be Gary Brow.

The Exiles are back on the pitch tonight against the ERU defending champion Druids (4-2). Kickoff is 7 p.m. at Outlaws field.

Meanwhile, the thirds tackle the Clansmen (4-2) at 7 p.m. Friday at Airways Park. The thirds are coming off an easy road win over the Pirates (2-4) last weekend. It was their first game since dropping a 29-5 decision to the Edmonton Rugby Union-leading Axemen (5-1) May 30 in Edson.

The 2008 ERU finalists have struggled to maintain last year’s high standard of excellence when they finished third at 10-5-1, then knocked off the Clan 19-10 in the semifinals before bowing out to the Druids 52-6 in the Visser Cup playoff.

The third cap in as many starts with the Canadian senior men’s team for St. Albert first division prop Andy Tiedemann was against Ireland at the seventh annual Churchill Cup.

In last week’s 30-19 loss in Colorado, the high school rugby product of the Paul Kane Blues was subbed off at halftime with Canada ahead 16-13.

Tiedemann’s second cap was in the 42-10 win over the former Soviet Republic of Georgia in the opening round at the Churchill Cup. He was given a breather in the 57th minute.

The first cap for the University of Victoria Vikes standout was last month’s 32-23 loss to Wales in a test match in Toronto. He was replaced in the 60th minute.

Tiedemann, 20, also served as a reserve in Canada’s 26-6 loss to Ireland in Vancouver last month.

The next match for Canada at the Churchill Cup is Sunday against Argentina in the crossover playoff between the second place teams in pool play.