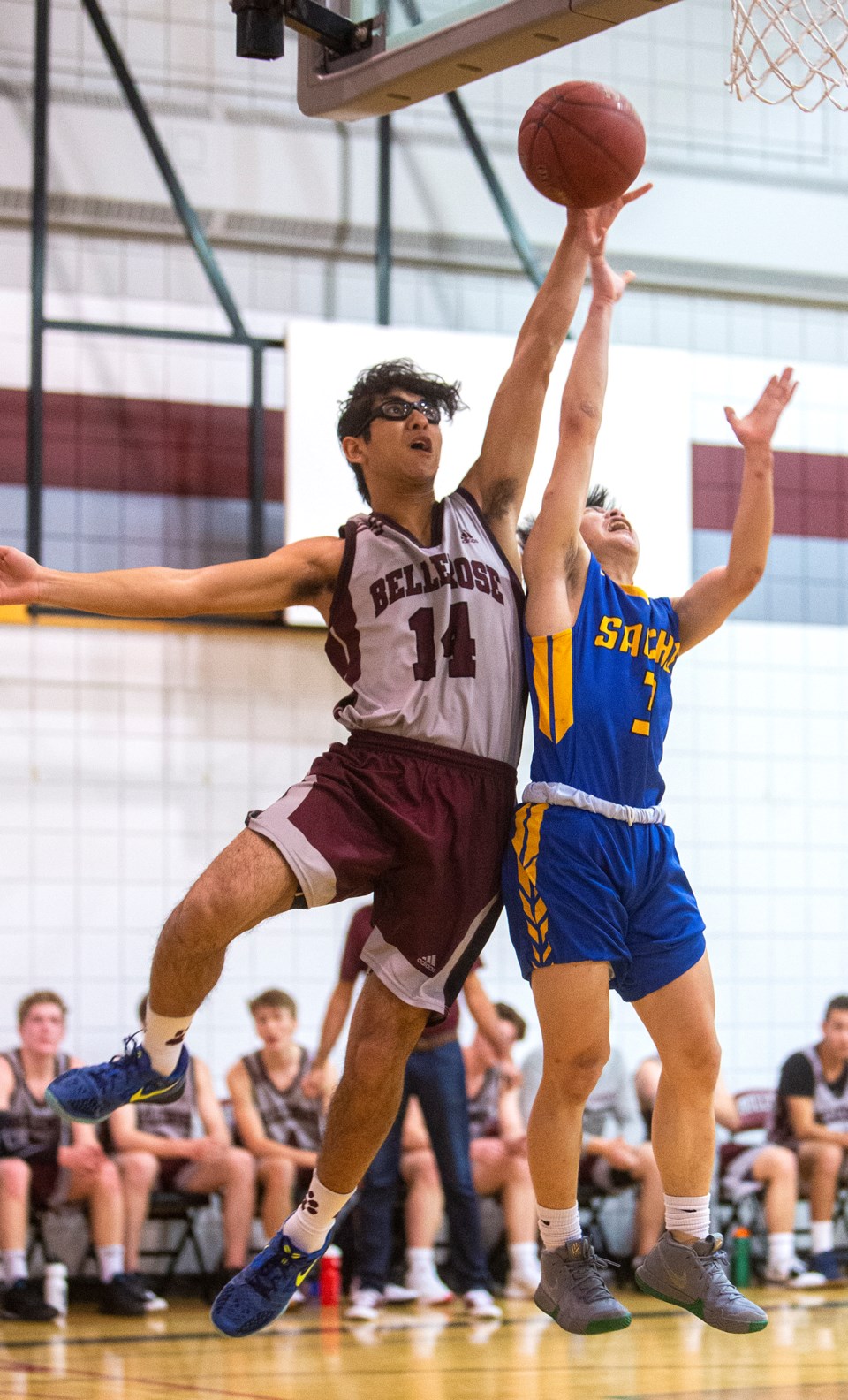 REJECTION – Vince Laurel of the St. Albert Skyhawks is denied by Nikhil Bhatengar of the Bellerose Bulldogs in Wednesday's rivalry game. The Skyhawks won 77-62 at Bellerose. In the metro Edmonton division two league, the Skyhawks are 3-2 and the Bulldogs are 1-4. CHRIS COLBOURNE/St. Albert Gazette

'The best defence is a good offence' adage was the winning formula for the St. Albert Skyhawks in Wednesday’s rivalry game against the Bellerose Bulldogs.

The metro Edmonton division two men’s basketball tussle was too close to call until the Skyhawks methodically shut down the Bulldogs to lead by four after three quarters before pulling away during a game-changing 16-2 scoring romp for the 77-62 victory at Bellerose.

“The turning point was our defence at the end of the third and beginning of the fourth quarter. We locked them down and that gave us momentum that we took on offence,” said Colin Torok-Both of the Skyhawks.

The steady Grade 11 guard unleashed two three-pointers 36 seconds apart to put the Skyhawks on top for good after the Bulldogs tied it at 67 on Logan Kowaluk’s free throw with 6:17 to play.

After the Bulldogs fell behind 63-57, Derian Ward drained a shot with 4:37 to go and the Skyhawks replied with 10 consecutive points and the last eight deposited by Talen Eybergen included a pair of three-pointers to seal the deal.

Eybergen led the Skyhawks in scoring with 16 points and tied Torok-Both for the most three-pointers on the team with four apiece.

“We played a solid game overall, but we kind of gave them open shots in the fourth quarter and one guy got hot and that’s what drowned us in the end when we were making a push,” said Ward, a versatile Grade 11 Bulldog who racked up 16 of his game-high 18 points in the first quarter and his third three-pointer of the night left the Skyhawks trailing 19-14.

“I just got hot and my teammates kept finding me,” Ward said.

Tony Mak’s seven points in the opening 10 minutes kept the Skyhawks within striking distance of the Bulldogs at 26-21 at quarter time.

The second quarter started with 10 consecutive points by the Skyhawks as guard Vince Laurel sparked the attack with his speed and shiftiness. The six points by Laurel during the run included a free throw to make it 29-26 after Fregene rejected a scoring attempt by the pint-sized Skyhawks and was then tagged with a technical for comments directed toward Laurel.

Fregene was swatting the ball with regularity while chipping in with nine points. However, one shot that didn’t drop through the hoop for Fregene after back-to-back baskets to pull within one was off a turnover and his breakaway dash on what looked like it was going to end with a slam dunk turned into a fingertip roll layup that spun off the rim as the majority of the Skyhawks on their bench stood and clapped in celebration over the unsuccessful scoring attempt.

“We kind of came out a little slow and they got in front a little bit, but we brought it back by half,” Torok-Both said of the 41-40 halftime lead. “In the third quarter we just tried to stay in it and took the lead in the fourth and then just kept it.

“We just played as a team. We never gave up. We were resilient.”

Torok-Both was instrumental in the Skyhawks’ second-half surge leading up to his pivotal back-to-back threes. In the third quarter, his three-point play off an offensive rebound extended the lead to 50-44 and with 1:23 remaining in the period pumped in a shot of a clever no-look pass by Jackson Ganton for the 52-47 advantage.

Torok-Both finished with 14 points and Ganton, a crowd favourite among the team's supporters in the stands, contributed 11 as the Skyhawks muzzled the Bulldogs for the second time this season.

Last month’s 65-62 decision against the Bulldogs at the SkyDome was a must-win game in the play-in ability round robin in the Skyhawks' quest to remain in division two.

“We got a couple of technical fouls in that game so this time we managed to keep our cool and let them lose theirs,” Torok-Both said.

The Skyhawks are 3-2 in league play under first-year coach Dayn Scaber.

“We started out kind of slow, but we're just building momentum up until the playoffs,” Torok-Both said. “We’ve just got to stay steady throughout the season."

The first game in the new year for the Skyhawks was 88-78 against the host Archbishop MacDonald Marauders (1-4) Monday.

“We had a big lead, we lost it and then we gained it back slowly and steadily,” said Torok-Both, 16.

The Bulldogs were coming off their first win in league play after three losses, a come-from-behind 65-62 character builder against the Austin O’Brien Crusaders (2-4),

“We didn’t give up. We kept playing. We were down 11 in the fourth and we got hot and we went at it,” Ward said of Monday’s result at AOB. “We keep fighting no matter what.”

The Battle of St. Albert was another solid effort by the Bulldogs despite the outcome.

“It was very energetic. We all enjoyed playing in it. It was a good game. Rivalries are always good games,” Ward said.

The Bulldogs will regroup this weekend at the Leduc Tigers’ tournament before entering the exam break and the first game back is Feb. 3 against the Paul Kane Blues (4-1), last year’s division two finalists, at Bellerose.

“We started off (the season) rough, but that happens with every team. We’ve just got to keep growing and hopefully we can get on a run at the end of the season,” said Ward, 17. “We keep improving each game and if we can play a solid fourth quarter we'll be in every one of them. We just always have that one quarter off.”

The Skyhawks return to action Feb. 3 against the J. Percy Page Panthers at the SkyDome and the next rivalry game is Feb.10 with Paul Kane as the visiting team.