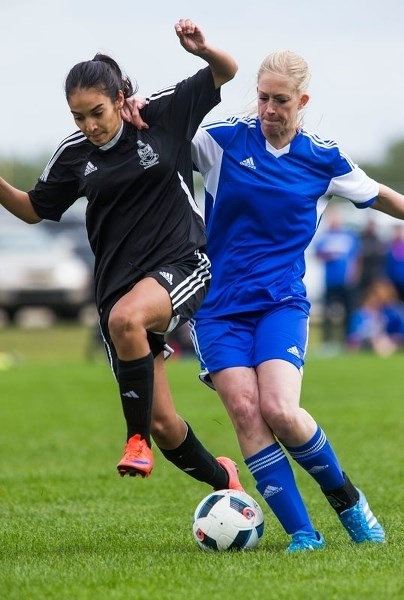 AGGRESSION â€“ Suzanne Schulz of Mavericks 09 jostles for the ball in Monday&#8217;s 2-1 loss to the KC Trojans in the Tier III provincial final at the ESA Complex. Schulz scored three of the Mavericks&#8217; 13 goals in the tournament as the St. Albert Women&#8217;s Soccer League division one team finished 3-1.

The Impact division IB women in the Edmonton District Soccer Association won the Tier I final in extra time in Calgary and Mavericks 09 of the St. Albert Women's Soccer League settled for silver in the Tier III tournament at the ESA Complex.

The division 1A St. Albert Rangers and Impact division 2A women also placed fourth overall in their four-team Tier I and Tier II provincials, respectively, in Calgary.

Louise Logan's goal for the division 1B Impact in the 116th minute was the winner in the 3-2 gold-medal match against the Sonics of the Calgary Women's Soccer Association.

"It was a fantastic game," said head coach Brian Murphy.

Shelby Oshust opened the scoring and two minutes later the Sonics tied it up.

"In the first minute of extra time there was an injury that caused a 40-minute delay and when play resumed we pressured them regularly but we couldn't convert," Murphy said.

Logan's championship clincher was set-up by a "tremendous" cross-in from the left side for the lead the Impact wouldn't relinquish in the last four minutes.

Ashley Chaput went the distance in net in all four matches as the Impact finished 3-1 in the four-team draw. After falling 1-0 to Angels Scottish SC, the first-place division 1A EDSA team the Impact beat 2-0 in the Tier I provincial qualifier, the St. Albert squad defeated SSR Savanna of Calgary 5-1 and the Sonics 1-0 for a berth in the final.

Boe also struck in the first tilt against the Sonics.

The Impact ended the season with an overall mark of 13-4-4 (58 GF/17 GA) and will move up into the premier division next year after placing first in division 1B at 9-3-4.

The Mavericks added silver to their provincial medal collection of gold in 2014 and bronze in 2012, plus three fourth-place ribbons following the 2-1 loss to the KC Trojans.

"We worked really hard this year to get here and second is still all right. It's a silver medal and we haven't had a silver medal but now we have one to go with bronze (in Tier IV) and gold (in Tier III)," said outside defensive player Kristen Patrick. "We're all proud of each other."

The third goal of the tournament by Christina Guay, a penalty shot from a handball infraction in the 30th minute, put the Mavericks on top against the Trojans, the No. 1 EDSA rep in Tier III and the top Tier 4 Atterbury division team at 14-0 (80 GF/1 GA) in league play.

A couple of chances by the dangerous Suzanne Schulz almost resulted in goals for the Mavericks in the first half.

Aggressive play by Allyson Fong and contributions up front by Chelsey Marques and Jen Bruinsma, plus key saves by goalkeeper Sue Forest-Trainor, also highlighted a solid first-half effort against the younger Trojans.

A penalty shot six minutes after the break tied it at one and the winner was a tap-in into an open net off a cross over top of the out-stretched hands of Forest-Trainor with six minutes to go. It marked the first time the Mavericks trailed in the tournament.

Seven minutes before the Trojans' go-ahead goal, Marques just missed the top right-hand corner on a free kick with the ball positioned on top of the penalty arc.

"Honestly, we tried as best as we could and they come out on top with a great bounce and a great pass and unfortunately we were down by one," said Patrick, a steady figure on the wing who worked hard to direct the ball into the box that resulted in the handball against the Trojans in the first half.

"It was a really great game, very positive and very competitive. We played our best game after three games and we had a lot of fun. That's all that matters," Patrick added. "There were a few little bad shakes here and there but we had a great time."

The Mavericks kicked off the eight-team Tier III provincials with a 4-0 win over the Crew (NW Peace) and the goal getters were Bruinsma, Schulz, Fong and Natalie Miller.

The 5-2 win against BB United of Calgary was knotted at two at the break after the Mavericks grabbed an early 2-0 lead.

"We've been working together for years and we knew how to come out strong and we did. Those scores show how well we worked together. Today was just a bigger challenge," said Patrick, 38, a decade-long performer for the Mavericks upon her arrival in St. Albert from Calgary.

The loss to the Trojans ended a 14-game winning streak that started in last year's SAWSL playoffs after the Mavericks dropped their last two games at provincials in Calgary, breaking a string of 35 consecutive wins since losing the 2013 SAWSL division one final.

"We actually have a very positive attitude and that's what brings us together. We'll never be a negative team," Patrick said of the Mavericks (12-0, 62 GF/2 GA in league play), who are poised for a division one three-peat when the semifinals start Sunday.

The division 2A Impact lost 2-0 to the Blizzard Cruisers in the Tier II bronze-medal match to finish 0-1-3. Previous results were ties of 2-2 against both Santos FC and the Cruisers and 1-1 against the Edmonton Warriors.

"We held possession in all four games at better than 65 per cent or more but couldn't convert our chances. In my estimation we out-chanced every team we played by at least a 3-1 margin. That said all we would've needed was one more goal in any of the first three games and we would've played for gold. The effort and play was terrific but unfortunately we couldn't convert our chances. All in all it was a fantastic weekend and season," said Murphy, who also coaches the division 2A Impact, 14-4-4 (71 GF/26 GA) overall finishers who earned a division one promotion as the first-place 2A EDSA team.

The Rangers posted a 1-3 (5 GF/8 GA) record at Tier I men's provincials after the 2-1 loss to Futballers FC in the bronze playoff.