Starting a brand new football program as the head coach was the opportunity of a lifetime for Chad Hill.
Apr 17, 2018 12:00 PM By: Jeff Hansen 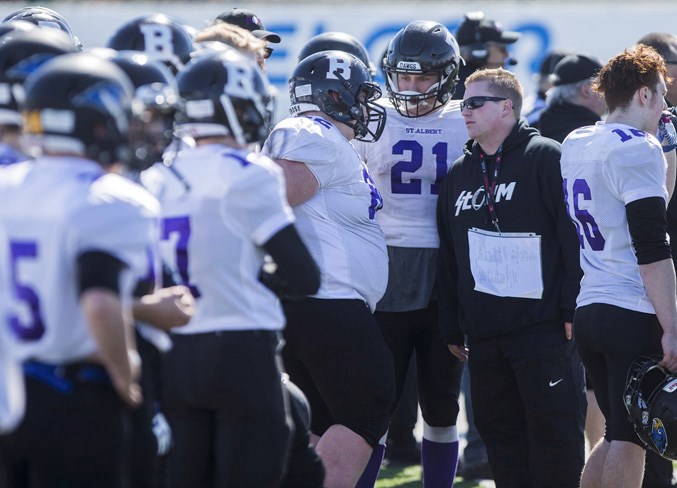 FIELD GENERAL - Chad Hill, offensive coordinator for the St. Albert Storm, discusses strategy with players in Saturday's 36-16 loss to the Lloydminster Red Dogs in the midget spring league. The 2016 and 2017 Metro Athletics Coach of the Year in the division one Carr conference with the Bellerose Bulldogs will guide the Sturgeon Spirits in their inaugural metro Edmonton football season in the division three Gilfillan conference. Hill stepped down from his postion after 10 years as the Bellerose senior team's head coach in early March. The Bellerose teacher was also the junior Bulldogs' head coach from 2005 to 2014.

Starting a brand new football program as the head coach was the opportunity of a lifetime for Chad Hill.

The 2016 and 2017 Metro Athletics Coach of the Year in the division one Carr conference with the Bellerose Bulldogs was the successful applicant to assume the field general duties for the first-year football team at Sturgeon Composite High School.

“It’s something I’ve wanted to do for the last few years and I’ve told family and friends I hope I get the opportunity to do,” said Hill, a teacher at Bellerose who coached the senior Bulldogs for 10 years before stepping down in early March. “If this opportunity didn't come up at this point then undoubtedly I would still be coaching Bulldogs Football but it’s an opportunity that seems to come at the right time in my career. I wouldn't want to do this 10 years from now. This is something that takes a lot of energy and takes a lot of time and I want to do this while I still feel I’m young enough and my life circumstances have enabled me that I can put this time in.

“If I was 49 years old I probably wouldn’t be looking at doing this but at 39 it’s something I want to do.”

Student athletes at Sturgeon have played football at Bellerose for a long time but this year the Namao-based high school decided to form its own team and the plans were finalized in the off-season.

“There was no surprise really with the team coming into fruition,” said Hill, who will also teach social and English at Sturgeon. “I talked to (Bellerose) administration about it. I said it looks like it’s going to happen and if it happens then I would put my name in to coach the team.

“For the first time ever I was considering other opportunities and I was really hoping that this opportunity at Sturgeon would work out and once a teaching position went up I applied for that because I do firmly believe a head coach should be a teacher at the school to start a football program. It doesn’t always have to be that way, there's great head coaches who haven't been teachers, but I think to start up a program it's probably the best if the coach is in the school,” said Hill, a Bellerose alumni who played his last year of high school football with the 1996 Bellerose-based St. Albert Storm.

Hill was also the junior head coach of the Bulldogs from 2005 to 2014, highlighted by three consecutive undefeated metro Edmonton premier/division one championships.

Spring camp is June 11 to 15 and exhibition games have already been scheduled before league play kicks off. The Spirits are expected to play some games at Larry Olexiuk Field.

“It will be a little bit different in division three,” Hill said. “I’ve looked at film of some of the teams already. There are some good athletes on some of these teams so I have to do my homework.

“It kind of reminds me when I jumped up from junior to take over the program for the Bulldogs in 2008 and that first year was a learning curve for sure. We got our butts kicked a few times and then the next year in 09 we turned it around and we started kicking butt,” Hill added. “Our goal is to be competitive right from the first game. We want to be competitive in division three and look to grow the program.”

Hill estimated there were 16 student athletes from Sturgeon that were in Grade 10 or 11 playing Bulldogs Football last year who are eligible to make an impact on the Sturgeon team.

Nathan Brake, a speedy receiver, Karl Haasz, Kyle and Kolby Phillips and Chase Kobza off the senior team that lost the division one and Tier I north finals to the provincial champion Harry Ainlay Titans are Sturgeon students, as well as quarterback Zach Froese, the junior team’s MVP who filled in at OB in the senior team’s Tier I north semifinal victory, Carson Antoniuk, Dylan Young, Marc LeBlanc, Addison Chaabane and Zach Roberts.

“In the first year, if we have 30 to 35 players that would be ideal. Obviously I would be ecstatic,” Hill said. “I remember coaching the junior team at Bellerose in my first year when they had the resurgence of the junior team in ’05 and I was told I would be lucky to have a team to coach, you probably wouldn’t have enough players at Bellerose they said, and we made it to the final (and lost to the St. Albert High Skyhawks) and we had over 40 players. We didn't have enough uniforms or gear for all the boys that came out.

“So it’s a challenge but I feel like it’s something that I’m totally not unfamiliar with.

“I’m also optimistic that the boys we have will attract some other solid student athletes to the team. I also have a ton of faith in the staff that I will be coaching with at Sturgeon."

The exodus of the following Bellerose coaches to Sturgeon is startling: Brayden Guy, who also stepped down as the team’s junior head coach at the same time as Hill, the legendary father and son duo of Mike and Ryan Moulds, highly-respected receiver coach Greg Germain, a future head coach in training in Matty Short and Alberta Golden Bears' alumni Zach Wilkie, in addition to Jacob Neuls, Jackson Ryan and Sturgeon alumni Ben Chretien will assist Hill in that pivotal first season.

“It’s the whole trust factor. I have guys that I’ve worked with for years, some of them have played for me, and I couldn't be happier with the support. It's a big deal to start a new program so to know these guys are on board moving with me is important, I mean these are countless hours these guys volunteer. For a lot of these guys it’s an extra 10 minute to 20 minute drive to go to Sturgeon instead of Bellerose, but it’s the loyalty we have with each other. We have fun coaching together. These are guys who are in it for the right reasons. They don't have kids on the team. They’re there because they love football and they love working with young athletes so I couldn't be more fortunate, especially with people like the Moulds helping out.”

The hardest part in switching sides from Bellerose to Sturgeon was “leaving the players, especially the boys that will be in Grade 12 after being with them for two years," Hill said. "These student athletes who i thought I would coach for three years and see them through high school and not seeing them finish that final year, that matters to me and part of that bothers me.

“But, again, I feel this is the only time in my career I get to start a football program.”

As for Bulldogs Football, a replacement for Hill has not been announced even though Bellerose is accepting player registrations for the upcoming season.

Apparently, the Bulldogs are planning to remain in division one even though the prospects of a division two Miles conference season playing against the Skyhawks and Paul Kane Blues would stoke the competitive fires for all three St. Albert football programs.