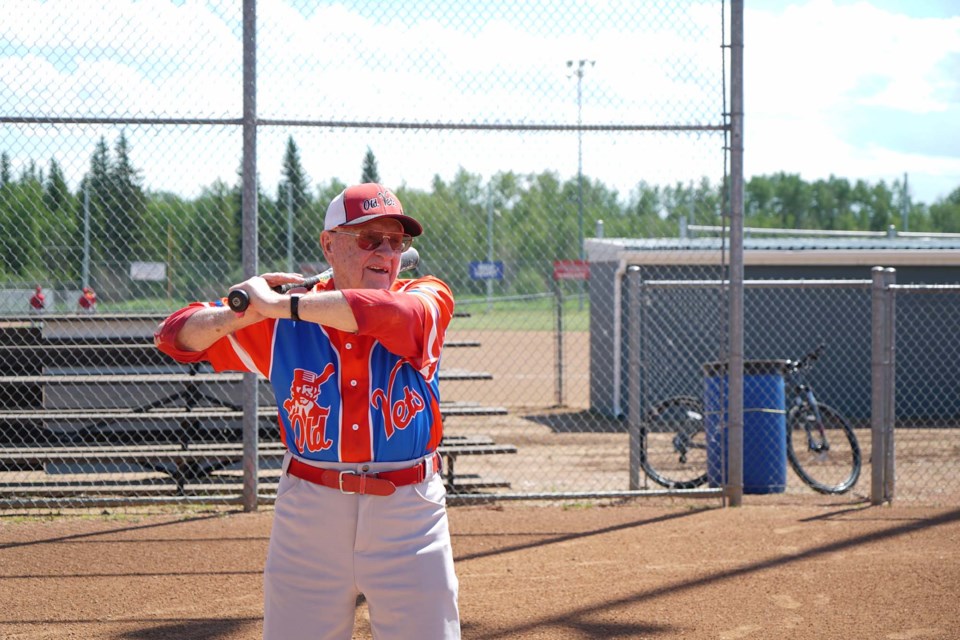 Earl Millman, 90, poses for a picture before the games get underway for newly created 70+ division at Meadowview Diamonds on June 22, 2021. PRESTON HODGKINSON/St. Albert Gazette

They might not have been the spry young athletes you typically associate with the game of slow-pitch, but the players on the field at Meadowview Diamonds June 22 taking part in the debut games for the newest 70+ age division for the St. Albert Men’s Slo-Pitch Association carried a child-like excitement with them as they prepared.

The director of this division, Wayne Hilsendeger, wore the brightest smile of them all. Adorning his bright red, white, and blue jersey for his team, The Old Vets, the excitement in his voice was contagious. It had been a long and arduous journey in getting this division formed and to see it finally come to fruition brought him a mixture of relief and happiness.

The idea of having a league for men over the age of 70 dates back to 2018, and the initial plan was to have them start play in 2019. Hilsendeger said the pandemic threw a wrench into those plans.

“We started looking at forming this league in December of 2018 and we continued to meet almost on a weekly basis with the six teams involved,” said Hilsendeger. “In 2019, when COVID came along, the season got basically kiboshed.”

“We’ve waited with bated breath. Normally our season starts in early May and it is now the 22nd of June so this season has been delayed. We are playing a shortened season of 21 games. Normally we play 28.”

The delay only made the players hungrier for the games. The field filled up with players more than an hour before first pitch as they got their warm-ups in. Among the large swath of players was one person who seemed to talk to each and every player there.

Earl Millman is a legend around these parts. He turned 90 this past Saturday and still comes to the park to enjoy the games. He is a veteran of 37 years with the slo-pitch association here in St. Albert. He first started playing in 1984 when he took part in the inaugural season of the 40+ division. Now he sits in the concession area and engages in some friendly banter with teammates and opposing players.

One might ask how someone can keep the passion for the sport at such an old age, but Millman had a simple answer.

“It’s all these guys that help keep it happening,” said Millman.

You might think he has a rich history with the sport that dates far before his start with the league in 1984, but that isn't the case. Millman said he wasn’t much of an athlete before he got involved.

“I played a lot of baseball as a kid, not in my later years, and I thought, 'Jeez, I would never play that slo-pitch game,'” said Millman.

He was first convinced to join the league when they created the 40+ division. He was roped into a meeting with a few of the people in charge of putting together teams and what came next was a long and fruitful slo-pitch career for Millman. When asked if he ever considered hanging up the cleats, there was another short and pointed answer: “Never.”

As for the games, all six of the 70+ teams were in action. Millman and Hilsendeger’s Old Vets were taking on the Old Buzzards in what became a bit of a barn-burner. The score read 10-2 for the Buzzards at one point, but the Vets fought back to make it close. The Buzzards would hold on for the 15-9 win in the end.

Elsewhere, the St. Albert Raiders flew to a 19-0 win over the St. Albert Seventies, while the Dynasty Relics squeaked out a 16-10 win over the Can Alta Sox. On days like this, however, the scores almost seemed secondary. It was a day where everyone was a winner as friends got to see each other and compete for the first time in a long time.

“It was almost mind-boggling, it has been well over a year since we have seen those people in that kind of environment,” said Hilsendeger. “

It was a beautiful day for some slo-pitch and the old guys didn’t disappoint. They pulled off some fantastic games and will continue to do so for the remainder of the summer. You can catch the 70+ league play at Meadowview Diamonds from 3:30 to 4:45pm on Tuesdays and Thursdays. The regular season runs until the end of August, with playoffs opening on Aug. 30.

For more information and the complete schedule visit SAMSPASlowpitch.com.