Weekend gets cut a short after soaring temperatures hit the city.
Jul 1, 2021 3:45 PM By: Preston Hodgkinson 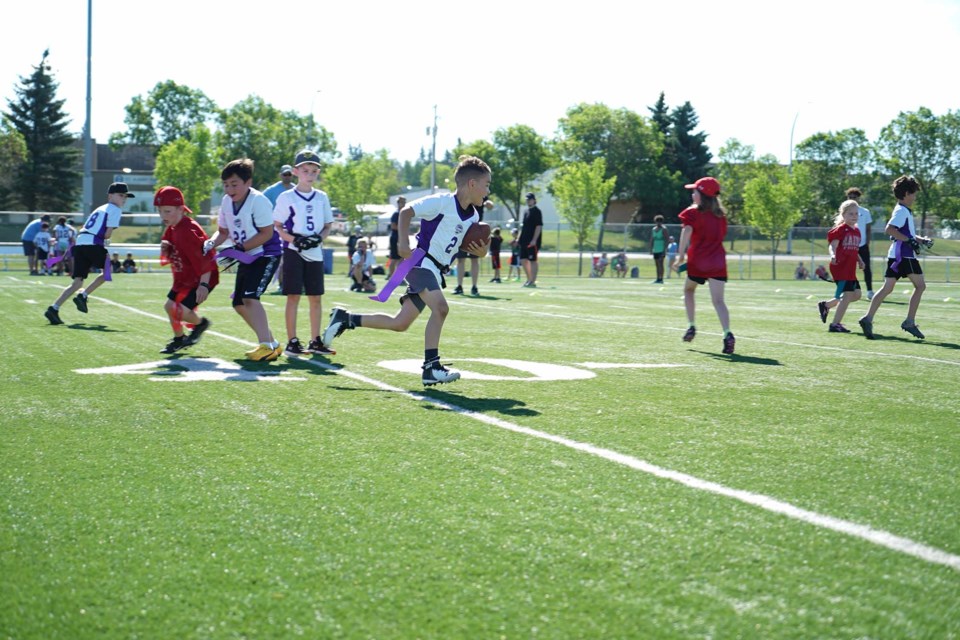 A St. Albert snap fools everyone in an atom game against the West Edmonton Raiders at Larry Olexiuk field on June 26, 2021. PRESTON HODGKINSON/St. Albert Gazette

The St. Albert Minor Football Association was busy this weekend. Unable to put on a proper flag football season together, they gathered enough support to put on a gigantic single-day jamboree for kids on Saturday. The jamboree was the only event they could pull off for flag football, as COVID complications prevented more from being planned.

The day saw kids from atom, peewee, and bantam divisions split the field into quadrants as they played games against the West Edmonton Crusader teams. It was a day full of cheering parents, laughing kids, and just a whole bunch of fun.

Association president Geoffrey Richer said even though a traditional season can’t be played, they still had high registration and demand for the sport to take to the field for at least one event.

“We had an overwhelming registration and great turnout,” said Richer. “When things opened up, the Capital District Minor Football, our governing body, said they wouldn’t be able to put an official season together.”

It wasn’t all lost for flag football. The district did allow games and events to be played between associations and clubs as long as they were sanctioned. Hearing this, St. Albert football was able to reach out to the West Edmonton Raiders.

“I knew at the time that the only other association that was doing as much as we were was the West Edmonton Raiders,” said Richer. “Jeff Stead, the bantam coach for the Raiders, got ahold of Martin Quirk, our bantam coach, and we started spit-balling ideas and came up with this idea for a full-day jamboree event.”

It was quite the sight to see if you were a football fan. Parents lined the stands as they cheered on their kids. Coaches diligently went over game-plans. Smiles could be seen and laughter from the kids could be heard across the field. It was a successful event and, despite the hot weather, the kids were full of energy.

William Davidson was one of those kids. He said it felt awesome to finally get back out on the field.

“It actually feels really good, I think we have been doing pretty good,” said Davidson.

It received rave reviews from the players, as they were finally able to get out of their houses and onto the playing field. It wasn’t all smooth sailing, however, as the heat would eventually cause some players to drop out early.

“It got a little tough near the end. It was a hot day and it was a long day for some of the kids,” said Richer. “Some of the kids had to pull out near the end, but overall the whole event went on pretty good.”

That wasn’t it for football. After the jamboree on Saturday, they also planned two tackle football games for the junior and senior girl teams on Sunday. The heat wave intensified and there were doubts both games could be played.

In the end, only the junior girls were able to play their afternoon game against Wetaskiwin, as the senior girls decided to play it safe and sit their game.

“We didn’t want to cancel if we didn’t have to, but unfortunately our senior team had a very small roster,” said Richer. “A couple of athletes decided not to play because they were worried about the heat and that’s 100-per-cent their right and we don’t want to force any player or parent to do something they are not comfortable with.”

The game that did get played was a good one. St. Albert held a slim lead going into the final minute of the fourth quarter only for Wetaskiwin to swoop in with a last-second touchdown to secure the win. The final score read 28-22 for the visitors.

“It was a really good game, I am proud of the girls,” said Richer. “Our girls played really tough and they held their own and battled really well in the heat.”

Both the junior and senior girls have one more game on their schedule. The seniors will take on the West Edmonton Raiders on July 9 while the juniors will go to battle against Fort McKay on July 10. Both games will be played at Larry Olexiuk field here in St. Albert.

Registration is open for the fall tackle season. They are accepting boys and girls aged six to15 and more information can be found on their website at SAMFA.ca