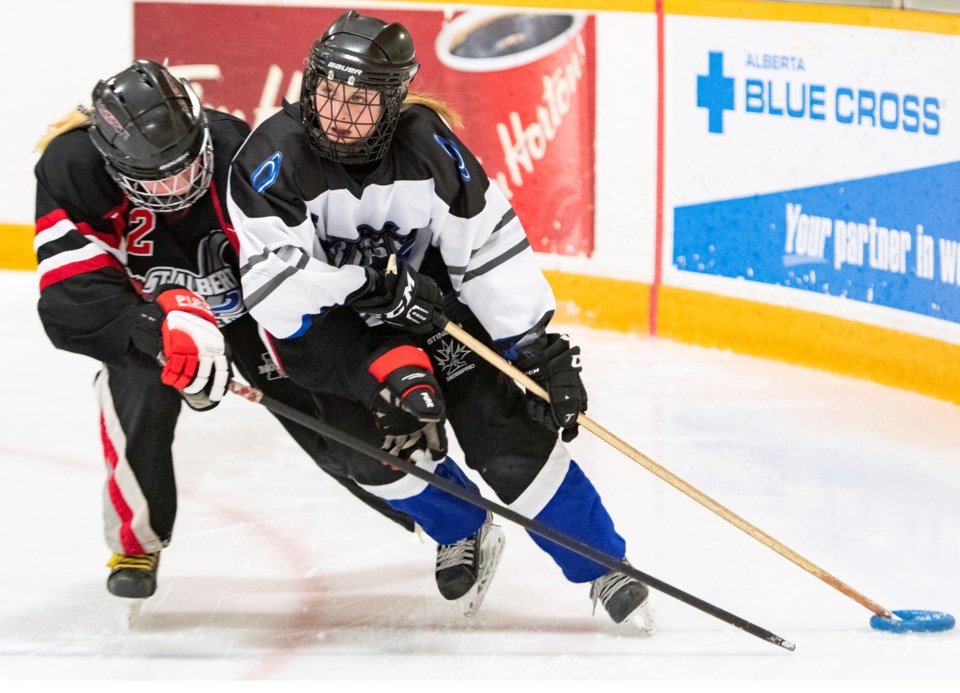 TIGHT CHECKING – Casey Houde, left, of the St. Albert Mission applies defensive pressure against Megan Kilpatrick of the Red Deer Rage in U14AA action in the Black Gold League. The AA provincials start Friday morning in Spruce Grove and nine U14AA teams are competing for four spots at westerns, March 25 to 28 at Prince George, B.C. The Mission are 27-11-3-2 this season as the No. 2-ranked team behind Zone 2 Blaze in the draw. BRUCE EDWARDS/St. Albert Gazette

The St. Albert Mission are poised to play their A game at the Ringette Alberta championships.

The AA tournaments for the three Mission teams start Friday morning in Spruce Grove with multiple qualifying spots available for the U14AA westerns, March 25 to 28 at Prince George, B.C., and the U16AA and U19AA nationals, April 5 to 11 at Ottawa.

Last year the U14AA Mission finished fourth at westerns in St. Albert as the provincial finalists while the U16AA and U19AA teams were unsuccessful at provincials in their bid for nationals.

“Our season has been an interesting one with some ups and downs throughout, much like most teams,” said head coach Eric Lavoy.

The Mission, with seven returning players on the roster, are ranked seventh out of nine teams in the U19AA draw and the top three head to nationals.

For the Mission to advance, “We will need to play with determination, outwork the other teams and execute our systems,” Lavoy said.

The U16AA Mission, led by nine returning players, skate into provincials as heavy favourites with an impressive 35-5-2 record that includes the 14-0 mark in the Black Gold League.

The gold medallists at St. Albert Turkey Ring in October, Bernadette Price Memorial Tournament in November at Saskatoon and Esso Golden Ring in January at Calgary were also silver medallists at the Spirit of the Winter Tournament.

Eight teams are split into two pools to determine the five qualifiers at the U16AA nationals.

“The girls are playing the game now at an incredibly high level,” said head coach Darcy Owen of the gold medallists at the Spirit of the Winter Tournament. “They have to keep doing the little things the right way like they have done all season. They move the ring well around all zones of the ice, they stay patient when attempting to regain possession of the ring from other teams, they forecheck with speed against other teams and check other teams using their intelligence and they need to keep moving the ring to open areas to make one another successful."

The Mission are ranked second behind Zone 2 Blaze in the U14AA draw and a well-balanced lineup has the St. Albert squad challenging for one of four berths at westerns.

“The girls have become very creative with their offensive game. They move the ring around the offensive zone confidently and look to make passes to make one another successful,” said Owen, noting the offence comes from a wide variety of players. “This makes our team difficult to defend against because every single one of the players on this team can be an offensive threat if given the opportunity.

“The girls also play the game in all zones of the ice with patience. They control the game at times by keeping possession of the ring and make intelligent decisions when passing the ring around the ice. They're looking for their teammates by trying to make the easy pass. They move the ring north/south efficiently, but always are looking to make the east/west pass if it's safe to do so,” Owen added.

“Defensively, the players are motivated to stop teams from scoring and entering our zone by staying close to their mark. This team has a defence that works hard every game and moves the ring well out of zone. Our goaltending has been outstanding all season and we feel that our goalie has continued to learn to play the position at the highest level her age group has to offer.”

The U14AA Mission have seven players back from last year’s team.

“This is a group of athletes that is great to work with because of their tremendous practice habits. They are a group that loves to practice. That's something that can't be taught, but it makes the season so enjoyable to coach and shows just how incredible their work ethic has been. If they continue to practice like they play or play as hard as they practice our coaching staff are hopeful great things will continue to happen for this team,” Owen said.