A winning season ended sooner than expected for the St. Albert Nektar Raiders.

The last game for the Raiders before Hockey Canada cancelled its sanctioned events across the county because of the COVID-19 pandemic was 4-0 against the Fort Saskatchewan Rangers in the Alberta Midget AAA Hockey League playoffs March 12 at Jarome Iginla Arena.

The No. 1-ranked AMHL team finished 32-2-4 in the regular season and playoffs.

“It’s pretty tough for your minor hockey career ending like that without knowing it could've been your last game or not, especially since we had a lot of potential,” said captain Mathieu Gautier. “It sucks, but you can’t do anything about it.”

The Raiders were poised to go the distance for a shot at the Telus Cup national championship next month at Saint-Hyacinthe, Que., as the first St. Albert team since the 1990 Eagle Raiders to win the AMHL provincial final.

“We had the tools that were needed in a championship team. We had the potential, we had the drive and we had the ability to do something that a St. Albert team hadn’t been able to do in a while and it’s kind of a shame we didn’t get the opportunity to see how it would play out for us,” said defenceman Tye Pedersen.

Uncertainly over the rest of the season surrounded game three in the north division final after Alberta Heath Services announced earlier in the day all gatherings of more than 250 people should be cancelled to limit the spread of the coronavirus. As a result, only parents from both teams were allowed into the rink.

“Everyone wasn't sure what was going on,” Gautier said.

The cancellation may also extend beyond the conclusion of the 2019-20 season as Hockey Canada will decide when sanctioned hockey will resume in the country.

“Going into the game, coach G (Geoff Giacobbo) said we don’t control the future, we control our now and our now is that game three and that’s all we had control over,” Pedersen said. “After the game, I don’t really think he really said we're shut down, but as much as he wanted to hope and believed it was going to keep going, he thought it might be done."

It was a surreal moment for the Raiders.

“There were no tears, but everyone was shocked," Gautier said. "It was the last time in the room for us so everyone was talking and just getting the most out of it."

The Raiders were coming off a pivotal playoff performance for the 2-1 series lead after losing game two 3-2 in double overtime March 10 in Fort Saskatchewan as the Rangers (22-19-4) scored the winner at 3:19 in the second extra period.

“It was a good last game. The boys were going,” Gautier said.

The victory also raised the team’s overall record, including the Mac’s Cup tournament, to a lofty 34-3-5.

“We had a pretty excellent year with only three losses overall,” said Gautier, a 17-year-old centreman and Grade 12 Bellerose Composite High School student.

The returning players on this year’s roster from the 2019 provincial finalists, first in the north at 19-11-4 and 6-5 playoffs, were Gautier, Pedersen, Proctor-Ramirez, forward Jaxon Dube and Breck McKinley on defence.

“The group of guys in that room was probably one of the top groups and one of the best families I’ve ever got the chance to play with over my 14 years of playing minor hockey,” Pedersen said. “The hardest part for me is for some of those guys that was the last game they were going to get to play and just thinking about that is hard. Those guys are like my brothers and I hope that they get picked up and we all go play in the next level and we keep getting to play hockey again, either against each other or with each other, but I don’t know how it’s going to play out."

Pedersen, 17, is now social distancing himself like everyone else while coming to grips with no more hockey.

“You have so much time, but there's nothing you can do with the time. You do your schoolwork and then you realize, wow, you’re done. There’s nothing else to do,” said the Grade 12 St. Albert Catholic High School student. 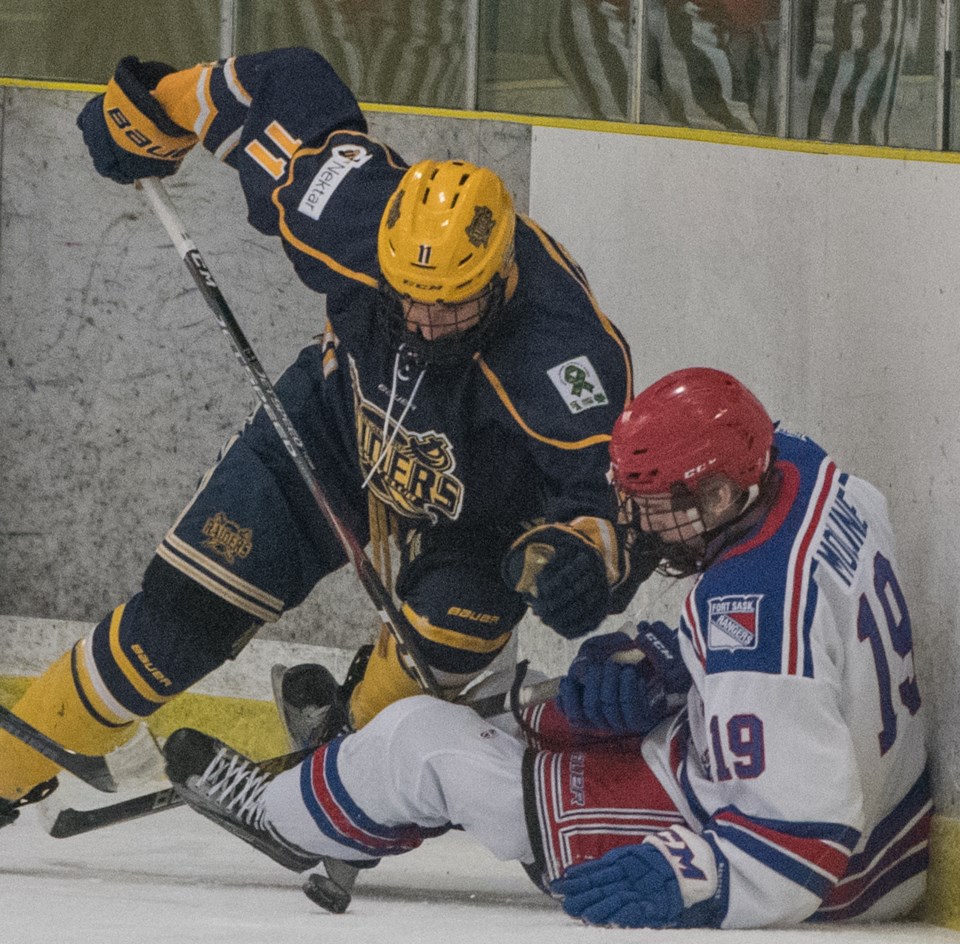 PHYSICAL FORCE – Ty Cheveldayoff of the St. Albert Nektar Raiders knocks down Tyler Moline of the Fort Saskatchewan Rangers in the Alberta Midget AAA Hockey League playoffs. The Raiders led the best-of-five north division final 2-1 when Hockey Canada announced it was cancelling its sanctioned activities, including national championships, effective March 13 due to the COVID-19 pandemic. The decision affected Hockey Alberta's league games, playoffs, practices, camps and provincials. The Raiders were the No. 1 team in the AMHL regular season at 27-1-4. JOHN LUCAS/St. Albert Gazette