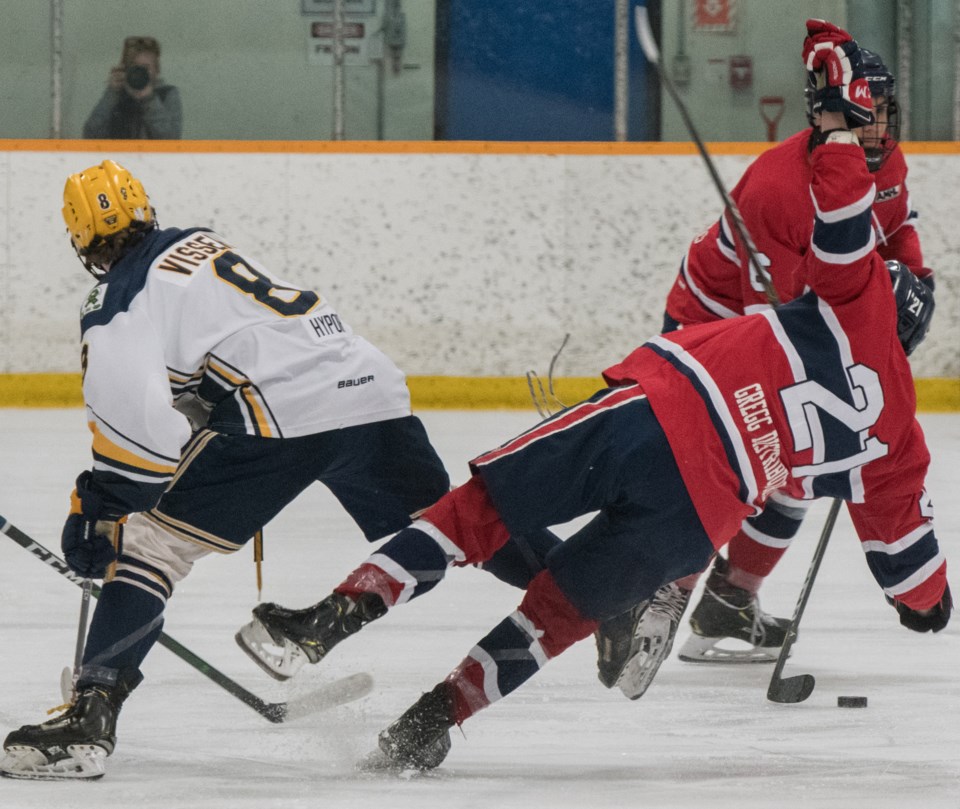 BOWLED OVER – Chase Visser of the St. Albert Nektar Raiders sends Carter Albrecht, a St. Albert product with the Canadian Athletic Club, sprawling to the ice in the north division semifinal series in the Alberta Midget AAA Hockey League. The Raiders, 30-1-4 overall, swept the best-of-five playoff and will play the Grande Peace Storm or Fort Saskatchewan Rangers in the best-of-five north final. JOHN LUCAS/St. Albert Gazette

The St. Albert Nektar Raiders don’t care who they have to beat in the next playoff round.

The Grande Prairie Storm and Fort Saskatchewan Rangers played Friday to see who would challenge the No. 1 team in the Alberta Midget AAA Hockey League and the score from the fifth and deciding game in the north semifinal was unavailable at press time.

“I don’t think it really matters. We’re preparing to play both teams,” said left-winger Evan Forrest prior to Thursday’s practice at Jarome Iginla Arena. “We’ll adjust on the run and we’ll give a good showing.”

“It will be a good series against either team we play,” said centre Koehn Zimmer.

The Raiders defeated the Storm twice in a 15-day span early in the season by tight margins of 3-2 and 2-1 and last month against the Rangers the scores were 4-2 and 4-3. The second tilt with the Rangers, which also wrapped up the league schedule, was a penalty-plagued affair with the Raiders guilty of the majority of the offences.

“Fort Sask is a very physical team. They kind of like getting under your skin after whistles,” Forrest said. “Grande Prairie is a pretty physical team too and they move the puck pretty well.”

“Fort Sask is a fast team. They’re a very physical team. They know how to play the game. With GP it’s the same thing as well," Ziemmer said. “They each know their roles.”

The Raiders don’t plan on changing what’s made them the team to beat in the playoffs.

“We’ve got to stick to what we’ve done,” said Ziemmer, noting there is one area that has to be addressed. “We’ve just got to be more disciplined.”

The Raiders kicked off the playoffs with the three-game sweep of the Canadian Athletic Club (11-15-6) after a first-round bye.

“We were really hyped up to play. We gave it our all and it worked out for us pretty well,” Forrest said.

The 5-4 series opener at Jarome Iginla Arena was decided on Ziemmer’s second goal of the night with 7:06 left in regulation time after the Canadians made it 4-4 two minutes earlier with the team’s fourth power-play tally.

In game two, Forrest triggered a three-goal outburst in the first period by lighting the lamp 54 seconds into the match at Bill Hunter Arena.

The game three clincher featured the sixth and seventh power-play goals and the second shorthanded tally of the series for the Raiders.

The Canadians finished with six goals with the man advantage.

Shots were 46-23 in game one, 52-27 in game two and 32-22 in game three for the Raiders as Andreai Proctor-Ramirez started back-to-back games and Carson Ironside closed out the last contest.

“It was a good series. It was back and forth the first game and then we kind of took it away there. The second game we had a good game. We got off to a good start with a three goal lead after the first and then we finished it off and then we came back home and finished the series off,” said Ziemmer.

The fourth overall pick in the 2019 Western Hockey League bantam draft by the Prince George Cougars produced a team-leading nine points in the playoffs while flanked by Forrest and Chase Visser.

Ziemmer and Forrest were the co-leaders in goals with four apiece and Visser’s two goals were potted on the power play in game one.

“We started clicking kind of thing in the playoffs. We got our chemistry up and we buried our chances that we got,” said Ziemmer, who recorded 26 points in 26 games and was second in goals on the Raiders with 15, including six on the power play, as a 15-year-old.

The U16 Team Alberta forward at the WHL Cup in October also led the Raiders in scoring at the Mac’s Cup with five goals and seven points during the opening two games of the tournament.

Zimmer and Forrest did the most damage in game two with one goal and three assists apiece with Visser riding shotgun on the potent line combination that’s been together for some time.

“We were getting to the net really well and we were communicating in the offensive zone and the defensive zone. We weren’t in the defensive zone a lot so that helped us create a lot of offence and a lot of opportunities and then we buried quite a bit of them so we’ve just got to keep doing that,” said Forrest, who tied Jaxon Dube for the second-most points on the Raiders in league play with 27 in 32 games while notching seven goals.

Forrest, 17, also had his Lady Byng season of zero penalty minutes end with a hooking infraction in the second period of game three.

The Grade 11 Spruce Grove Composite High School student was another major addition to the Raiders after compiling 25 goals and 62 points in 33 games last season with the PAC Saints as the recipient of the Most Valuable Forward Award in the Alberta Minor Midget AAA Hockey League.

The Raiders, with five returnees in the lineup from the 19-11-4 first-place team in the north and 6-5 playoff showing as provincial finalists, storm into the next playoff series with a sizzling 22-0-2 undefeated streak since the 2-1 loss to the Sherwood Park Kings (9-14-6) Nov. 6.

The Raiders are super stoked to become the first St. Albert midget AAA  team since the 1990 Eagle Raiders to win provincials for a berth in the Pacific Region best-of-three qualifier for the Telus Cup in April at Saint-Hyacinthe, Que.

“We’re all very, very excited. We want to go as far as we can go and hopefully it’s the Telus Cup,” said Ziemmer, a Mayerthorpe product and Grade 10 Bellerose Composite High School student.