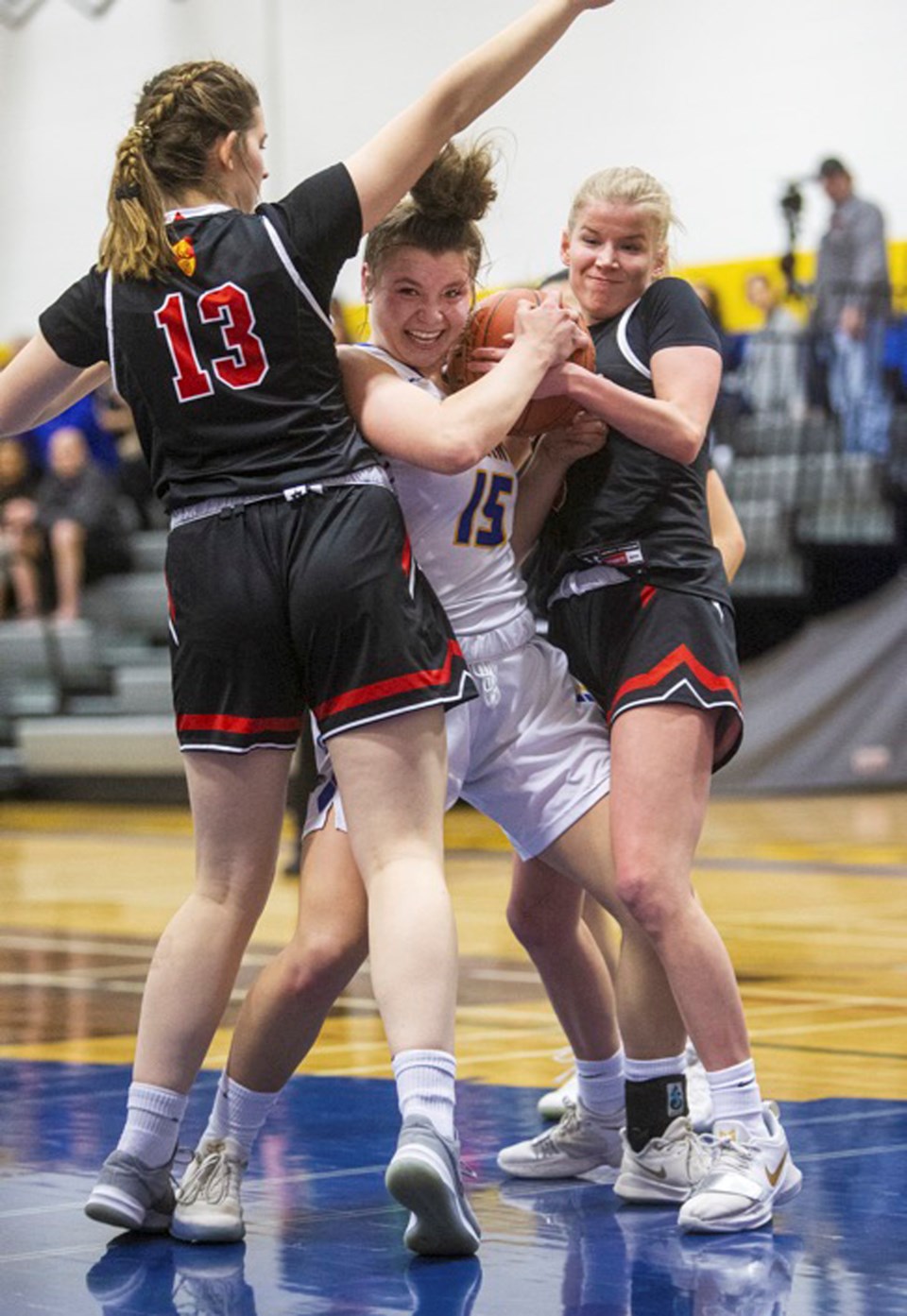 GRIPPING ACTION – Dakota Wedman of the St. Albert Skyhawks squeezes the ball while pressured by Zoe Arnett, left, and Sadie Nysetvold of the Strathcona Lords in Wednesday's metro Edmonton division one semifinal at the SkyDome. The Skyhawks are 13-0 in league play and 30-1 overall after the 99-49 blowout. Today at 5 p.m. the Skyhawks play the Jasper Place Rebels in the division one final at Ross Sheppard High School. The Skyhawks beat the Rebels in the last two finals. CHRIS COLBOURNE/St. Albert Gazette

The St. Albert Skyhawks control their own destiny as the undeniable No. 1 4A high school women’s basketball team in Alberta.

The Skyhawks have amassed a brilliant 30-1 overall record with five games remaining to three-peat as metro Edmonton division one champions and repeat as provincial gold medallists.

“It’s so exciting knowing we can do the same thing again,” said Grade 11 sparkplug Morgan Harris, one of eight returnees on the 11-player roster from last year’s 30-5 juggernauts.

The Skyhawks are smoking hot as winners of 24 consecutive league and tournament games entering today’s final against the Jasper Place Rebels.

“We’ve got our momentum going. Everybody’s energy is up before our big game,” Harris said.

Tipoff is 5 p.m. at Ross Sheppard High School in the last game before the 16-team provincials start March 19 at Lethbridge for the Skyhawks to go 4-0 as the tournament's defending champions.

“We have a lot of experience in these situations and in tough games so we’re definitely ready for it,” said Annacy Palmer, a silky-smooth Grade 11 shooter who dropped 20 points on the Strathcona Lords in Wednesday’s 99-49 semifinal thrashing at the SkyDome.

The 13th win without a loss in division one was also the 10th league game the Skyhawks have stacked up 95 or more points and the team's fifth 100-point-plus match was Monday’s home-court 104-43 playoff pounding of the St. Francis Xavier Rams (5-7).

The Skyhawks have also racked up 100-plus points on a number of opponents during their 17-1 domination in six tournaments.

“We’re playing like a team,” Harris said. “Everybody is passing, we’re seeing each other and we’re hitting our threes and all of our shots.”

Palmer suggested the best is still to come from the high-flying Skyhawks.

“We’re in a good spot, but we definitely have room to improve,” said the versatile offensive threat.

“Obviously we’re going to have to want it more and not let all the emotions and the excitement of the game get to us. We have to play our game and play as a team,” Palmer said.

After 13 league games, the Skyhawks are averaging a mind-blowing 95.7 points scored and only 37.8 against while the Rebels are 77.5 offensively and 49.4 defensively.

When asked what the Rebels do best, Harris replied, “They’re good at shutting down our top players and knowing exactly who is scoring and who they need to play defence against," said the speedy five-foot-four guard. “Their shooting is pretty good too.”

Both teams have numerous players who were teammates on various provincial age-group squads over the years.

“Everybody knows each other so it’s pretty intense, the competition. There is pressure playing them in a big game,” said Harris, the first star in last year’s 69-49 final at Shep with an energetic effort at both ends of the floor.

The Skyhawks also knocked off the Rebels 68-58 in the 2018 final at Jasper Place.

A third straight banner would equal the league's last three-peat when the 2002-05 O’Leary Spartans rattled off four premier conference (now division one) championships in a row before the merger of the metro and Edmonton public leagues in the 2013/14 season.

“It’s super exciting. Not every team gets the opportunity to go this many times in a row (to the final) so we have to stay focused and remember what we’re there for and that’s to win,” said Palmer, 16.

The outcome against Strathcona (7-6), a 4A honourable mention, was predictable after the opening 10-minute period with the Skyhawks in charge 28-15 as Dakota Wedman scored eight of her 12 points and Harris fired two of her four-three pointers before quarter time.

The Skyhawks continued to roll like thunder with 15 unanswered points in the second quarter before Strathcona replied with a three-pointer with 1:04 left in the half. At the break, it was at 49-20.

The Skyhawks kept pouring it on with a dazzling display of no-look and threading-the-needle calibre passes, tremendous shot-making and airtight defensive coverage for oodles of turnovers and stops to make it 78-41 after three quarters.

The only suspense was whether the Skyhawks would surpass 100 points and it seemed like a sure thing as time wound down as a pair of baskets by the underrated Abbey Kornak closed the gap to within two of triple digits.

However, when the dangerous Teá DeMong had the ball in her capable hands and lots of space to bolt to the hoop, she elected to dish it off and after it was eventually returned to her, the two-time Metro Athletics All-Star was fouled driving to the basket with 15 seconds left. DeMong proceeded to miss the first free throw before sinking the second one.

With 17 seconds to go, Strathcona was unsuccessful from the free throw line and DeMong reeled in the ball after the second attempt and it was eventually distributed to Kamryn DeKlerk, but instead of pushing for more points the Skyhawks elected to dribble out the clock.

The Skyhawks hooped it up without Mimi Sigue, a Grade 12 tower of power who enjoyed a load management day off with a cranky shoulder.

Sigue, who was a handful for the Rebels to contain in the paint in last month’s first-place showdown, is listed as a game-time decision for the final.

Sigue, DeMong and DeKlerk are the only Skyhawks remaining from the 29-7 provincial bronze medallists in 2018.

“It was kind of sad to see the seniors play their last home game,” said Harris, 16.

The quarter-final against the Rams was a laugher as the Skyhawks piled up the points at a wicked pace for scores of 33-14 after the first quarter, 62-22 at halftime and 91-30 after three quarters.

Palmer tacked up 19 points, followed by DeMong’s 15, Sigue's 13 and 10 apiece for DeKlerk and Flindall. 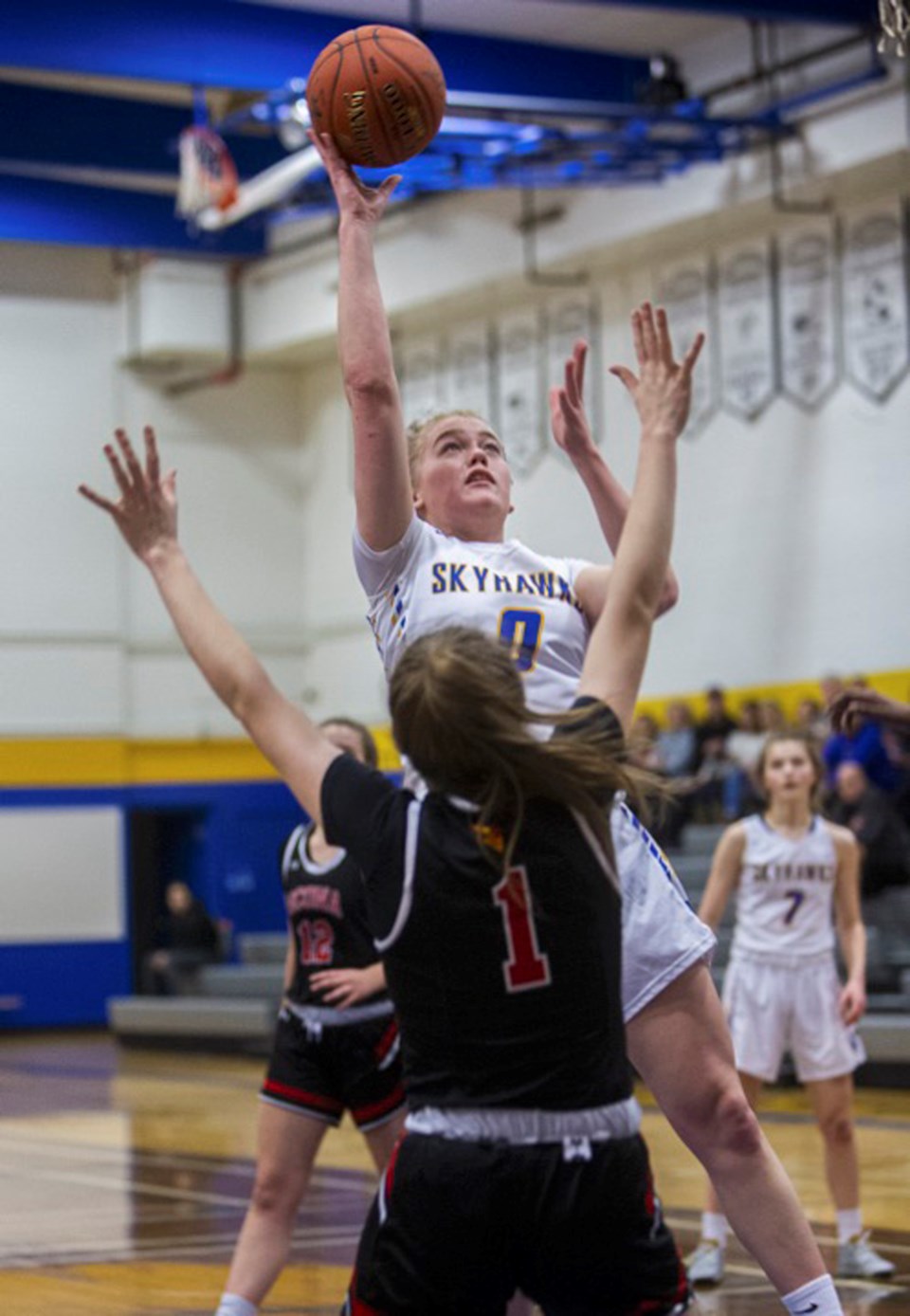