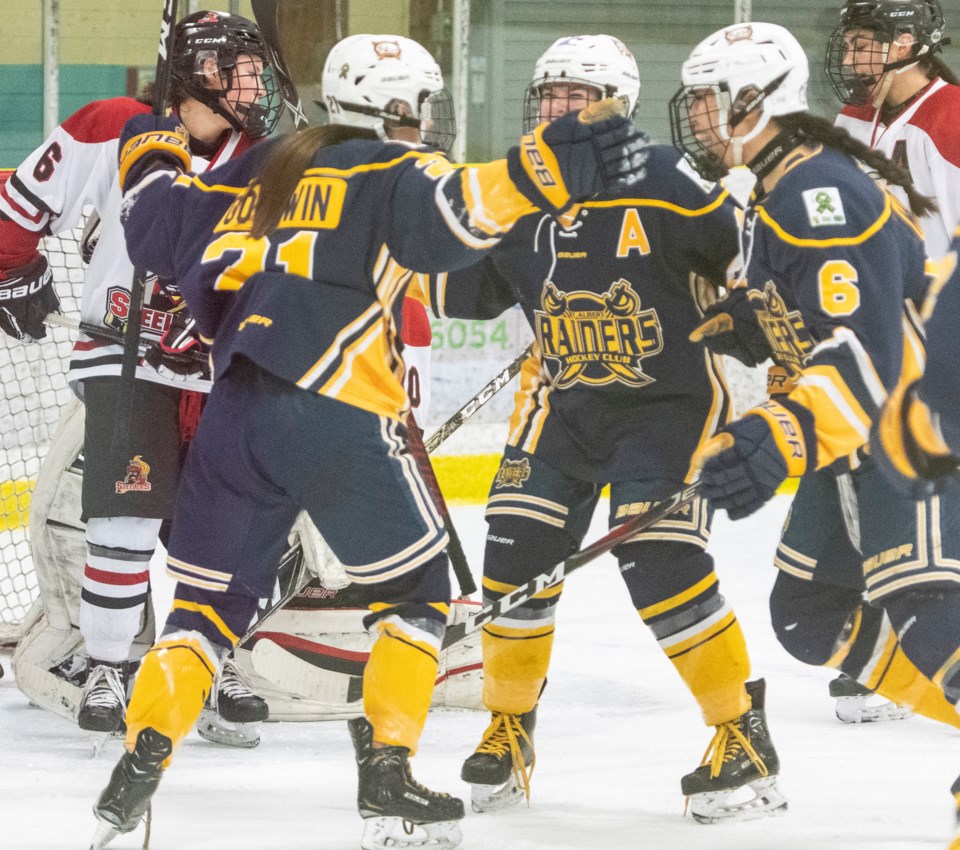 GOAL GETTERS – The midget AAA St. Albert Slash celebrate a goal in the Alberta Female Hockey League during a 25-2-3 regular season. The Final Frozen Four provincials for the Slash were scheduled for this weekend in Calgary before Hockey Canada cancelled its sanctioned events across the country, effective March 13, because of the COVID-19 pandemic. The Slash are winners of three consecutive provincials, Pacific Regional national qualifiers and Esso Cup national championships. BRUCE EDWARDS/St. Albert Gazette

The St. Albert Slash will have to wait until next season to continue their legacy of greatness.

“We were headed towards something really good and that's what the most upsetting part is,” said Alli Reich, captain of the 25-2-3 (82 GF/31 GA) midget AAA Slash in the Alberta Female Hockey League.

“To have that taken away really hurts and not being able to see each other now really stings for everybody,” Reich said. “We all know it was for the best, but it’s just hard to comprehend.”

The Slash were practicing March 12 in preparation for this weekend’s provincials in Calgary when Hockey Canada announced it was shutting down the 2019-20 season, effective March 13, for the health and safety of all participants in the sport and general public in response to the rapid spread and rising cases and concerns surrounding the coronavirus.

“Everybody was kind of awestruck. Nobody knew what to say or what to do next. We all just kind of sat in the dressing room in silence in our gear. Nobody wanted to leave. It was just really emotional because we knew that we wouldn’t be able to come out together as a team again,” Reich said.

The Slash can take solace their last weekend of the regular season ended with victories of 2-1 against the second-place Edmonton Pandas (19-9-2) Feb. 28 at Bill Hunter Arena and 4-1 against the fifth-place Lloydminster Steelers (10-16-4) March 1 in the Border City

“It was nice knowing that we finished strong and we gave it all we had, but it was still upsetting just for the fact we didn't even know (the win against the Steelers) was our last game,” Reich said. “We were practicing so hard for provincials and then to have that taken away from us hit the third years really hard without even knowing they had played their last final minor hockey game.”

Netminder Holly Borrett and forwards’ Reich, Jaden Bogden, Kelsey Hall and Brooklyn Schroeder are the Slash graduates among the 11 returnees from last year’s historic Esso Cup three-peat by the 36-5-2 Slash.

This season, the Slash average league-bests of 2.73 goals scored and 1.03 goals-against in 30 games.

Jenna Goodwin, last year’s AFHL rookie of the year, led all league scorers with 15 goals and 25 points while Reich tied for second in points with 22 and was third in goals with 12.

Cassidy Rhodes placed second in assists with 13, followed by Jayde Cadieux’s 12 and Bogden tied for fourth with 11.

Rhodes was also fifth in points with 20.

“Everybody was super devoted this year and it was the same as last year. Nobody wanted to end the legacy or let the third years down and I know the third years and second years wanted to give the first years a taste of what it was all about to be at Esso and hoist the (Cup) over your head. Everybody wanted to do it for each other and that’s the most important thing that you need on a team,” said Reich, 17, a Grade 12 St. Andre Bessette High School student in Fort Saskatchewan.