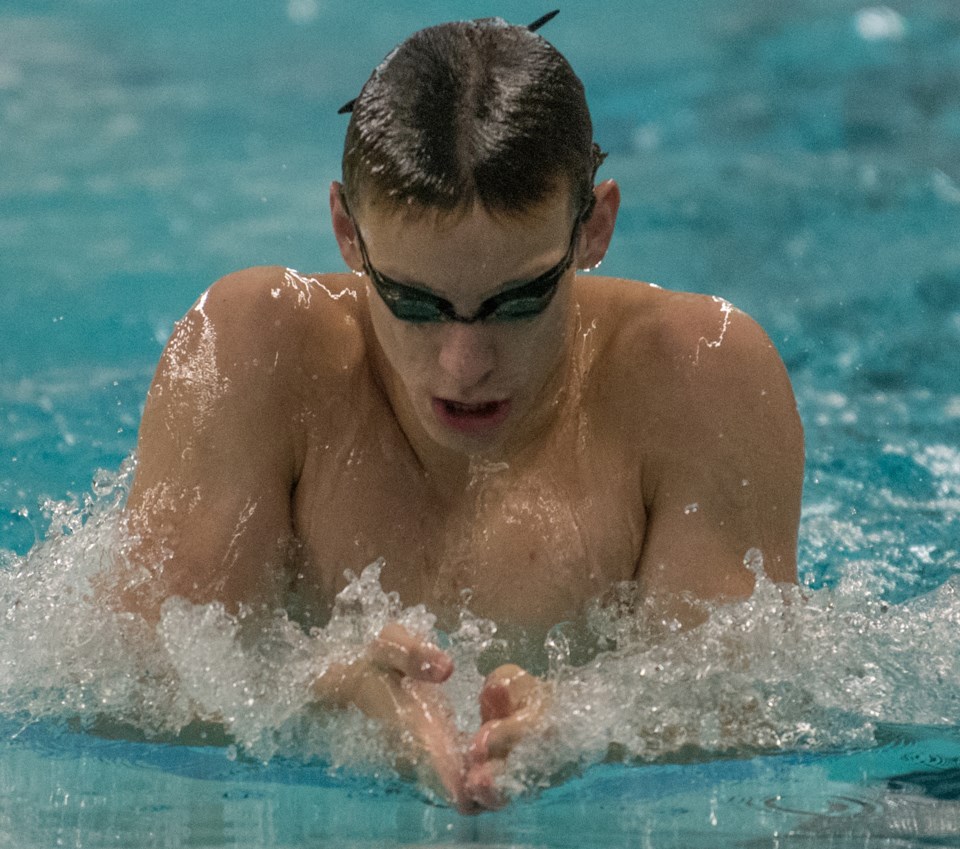 SPLASHY SWIMMER – Hayden Visscher, 14, of St. Albert qualified for the Swim Canada Olympic Trials in the 100-metre breaststroke. The Olympian Swim Club athlete recently broke Morgan Knabe's 23-year-old 100m long course male 14 breast record of 1:06.23 with a time of 1:05.80. The Olympic Trials were scheduled to start March 30 in Toronto, but have been postponed due to concerns over the spread of COVID-19. JOHN LUCAS/St. Albert Gazette

Hayden Visscher is swimming in the fast lane at a record-breaking pace.

The latest provincial mark eclipsed by the 14-year-old Swim Canada Olympic Trials’ qualifier from St. Albert was the 100-metre long course breaststroke in his age division with a time of 1:05.80 on Feb. 7 at the Edmonton Open.

Visscher wasn’t aware of the accomplishment until the news broke.

“I didn’t know I broke it until my mom (Natalie) texted me about half an hour later. It wasn’t something I was going for, it just happened so it was a huge surprise for me. Obviously, I was happy,” said the Olympian Swim Club athlete.

Visscher had also established new age division short-course standards in the 50m breast at 29.35 and 100m breast at 1:03.28 on Dec. 15 at the JP Fiset Invitational in Edmonton.

“I’ve been on a path of skimming those records and just being able to get ahead of them is a great thing. I love it. It keeps it exciting,” said the Grade 9 Lorne Akins School student. “It gives me a goal and I’m pushing these goals on me. These are personal goals. It’s what pushes me the most in racing. If I don’t have a goal then I feel like I’m just swimming and it loses the purpose essentially.”

Visscher is motivated to go faster in every race.

“It’s a mix of adrenaline, of focus, of just go. It gets my heart going on the last little stretch. You’re hurting, you’re in pain, but it means you’re going, it means you’re working, it means you're going somewhere so that's what I try to think about and then once you get it done, it's done,” said the No. 1 ranked Canadian in the 100m breast in his age division in the short and long course events.

“He’s very nice out of the water and he’s great in the water,” said Serediak, who also used to coach Knabe back in the day. “He has a great outlook and mindset on swimming and life. He’s a very positive young man, he’s quite organized, which really helps for this sport, and he’s very humble. He’s always a credit to his teammates. His teammates help him and he helps his teammates.

It didn’t take long for Serediak to realize Visscher was something special as a 13-year-old breaststroker rewriting the provincial record book.

“I was very surprised because I knew he was swimming really well, but he just had this racing instinct that I’m going to get it. If he sets a goal he goes after it and he gets it,” Serediak said. “When I saw that I was like, wow. OK, we’re going to start developing him a little bit more than a 14-year-old, like more maturely. We fixed up his breaststroke, tightened up his breaststroke kick and ever since then he just keeps getting better."

The 100m breast is Visscher’s best event, but he’s not sure why.

“Honestly, I have no clue. One day I guess I just got good at it and kind of grew to it.”

Visscher’s recent 100m breakthrough was fast enough for a spot at Trials, plus junior nationals in July at Montreal.

“It felt like a bunch of opportunities opened up to me. The biggest meet I’ve gone to is (last year’s) junior nationals and this time unlocked two more meets for me, so it was a big step which I was definitely excited for.”

Visscher was to be joined by Olympian teammates Avery Wiseman, a Canadian junior team swimmer, Taeghen Brezovski, Jasmine Foran, Fyn Buhler, Minh Nguyen and Connor Bissett at the Trials starting March 30 in Toronto, however, the qualifier for the 2020 Summer Olympics in Tokyo was postponed because of the COVID-19 pandemic.

Visscher is confident the Trials will resume once the severity of the coronavirus subsides.

“I’m still going to go to it, but it’s definitely still a bummer. Leading up to it, my coach had training plans for months and months,” Visscher said. “But to be honest, myself and two other guys only have one event there and it’s a 10-day meet so it’s not the worst for us. It’s the worst for my teammate, Avery. She’s been working up to this for years so yes it’s still happening, but being postponed it messes everything up.”

As for the milestone in Visscher’s career, “I don’t want to say it was a dream. I’m a person who doesn’t look very far in the future. I try and just take it month by month and see what happens, go with the flow, but just getting it was the most exciting thing ever. I didn’t think I was going to get it for awhile.”

It’s the first of what Visscher hopes will be more Trials in the future.

“After going and experiencing it my next goal would be trying to final in an Olympic Trials," said one the youngest swimmers to qualify for the Trials. “This year it will be more for experience. It’s my first time and I’m doing one event so I want to have fun with it.”

Visscher is spending his teenage years doing a gazillion laps in the pool six days a week with a two-a-day session mixed into the training.

“A big part of why I enjoy swimming is my best friends are in my group with me every day,” said Visscher, who started swimming at an early age at Fountain Park Recreation Centre. “I consider myself a bit of a bummer. I'm not a guy who is going to go to parties, I'm a guy who likes to chill and even though swimming is one hard-assed sport something just keeps me going and I think it's because I'm good at it and that fuels me and it pushes me to keep going because I know if I stop that I've missed opportunities. I see this as a thing I can keep doing until university and later.” 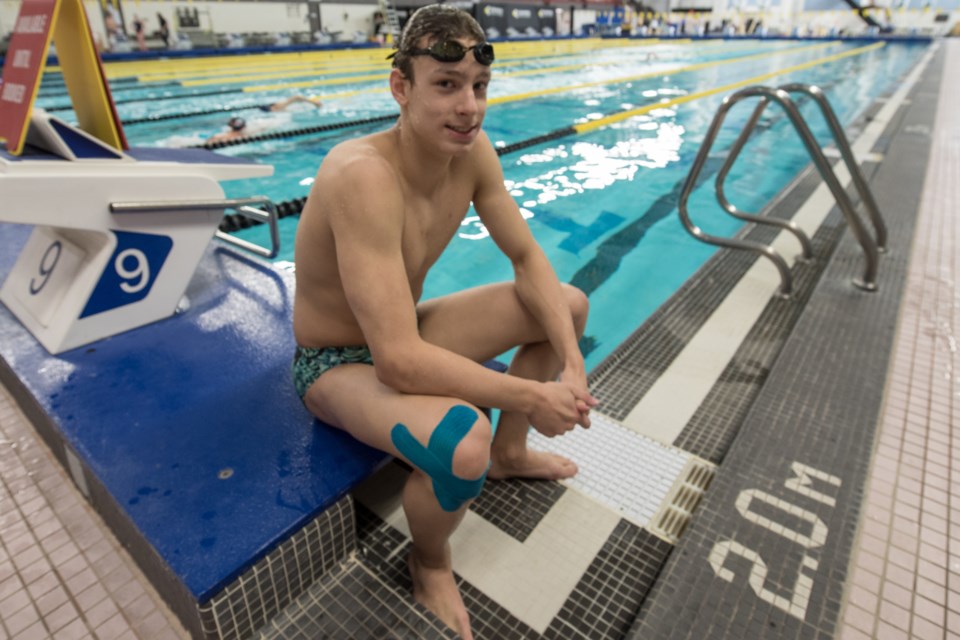 RISING STAR – Hayden Visscher, 14, of St. Albert is ranked No. 1 in the 100-metre breaststroke in his age division in the short and long course events. Visscher's latest provincial age-group record was 1:05.80 in the 100m breast and the previous long-course mark of 1:06.23 by Morgan Knabe stood since 1996. The Olympian Swim Club athlete qualified for the Swim Canada Olympic Trials that were postponed over the COVID-19 pandemic. JOHN LUCAS/St. Albert Gazette

POOL SHARK – Hayden Visscher of the Olympian Swim Club trains Saturday at Kinsmen Aquatic Centre. The Grade 9 Lorne Akins School student qualified for the Swim Canada Olympic Trials in the 100-metre breaststroke and is ranked No. 1 in his 14-year-old age division in the short and long course events. The Olympic Trials, March 30 to April 5 in Toronto, were postponed because of the COVID-19 pandemic. JOHN LUCAS/St. Albert Gazette