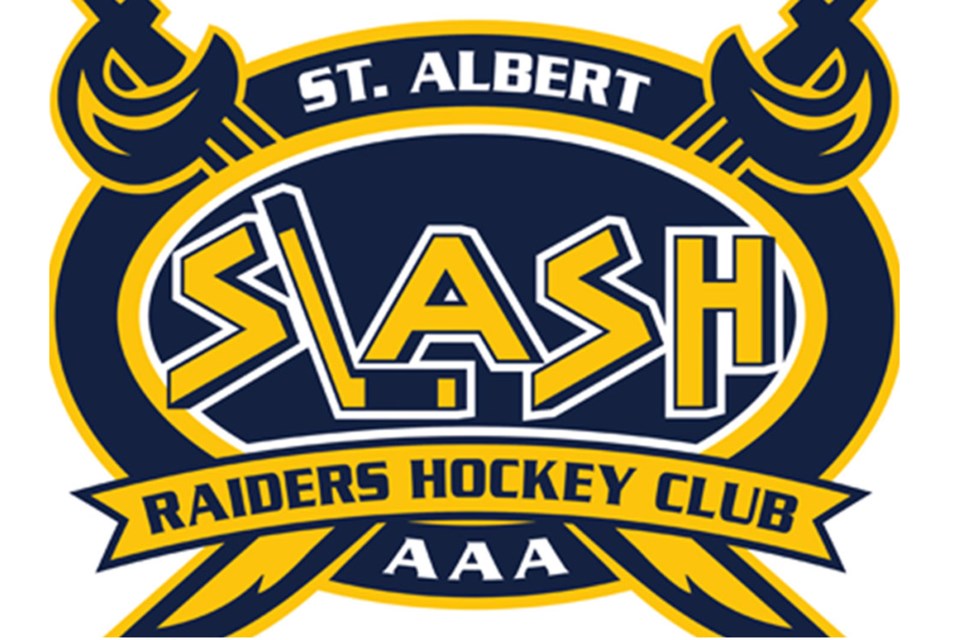 The fire still burns bright for the St. Albert Slash as the Esso Cup national champions for three consecutive years.

The red-hot midget AAA Alberta Female Hockey League team is undefeated this season with a roster split between newcomers and veterans.

“We’re all here for a reason and we all have the same goal,” said Alli Reich, captain of the 7-0 Slash. “Everyone is coming after us so it puts a lot of pressure on us to keep that legacy going, but it’s exciting. Everybody who is here wants to keep it going.”

Three of the wins were by shutouts before Friday’s home game against the Lloydminster Steelers (3-4) and the score was unavailable at press time.

“We’ve come out strong in every game and we were able to get that good start that we needed so getting to 7-0 was really important to us. It sets the pace for the rest of the season,” Reich said.

The Slash are continuing their winning ways with the addition of nine players.

“At start of the season when we got on the ice, we were kind of all from different teams so I guess it was like a new beginning, but our coaches, Dan (Auchenberg) and Sandro (Pisani), did some work with us and the most important part was becoming a team. We’re still building towards that, but every game you can see us improving and becoming more of a team. It’s just amazing how much we’ve improved already,” said defenceman Dayle Ross.

The Slash are beating teams with their skating and strength.

“We have a lot of speed, so against our opponents we use that to our advantage really, really well in getting the puck up and down the ice. We can move it well,” Reich said. “We also have size, which is important as well for those battles in front of the net and in the corners to come out with the puck.”

The Slash are returning 11 players from the lineup that finished 36-5-2 overall in the AFHL, Final Frozen Four provincials, Pacific Region national qualifier and Esso Cup after going 26-3-1 in the regular season.

“Last year, we had a lot of third year players and they had already went to Esso and they had been through it all and they were very confident,” said Ross of the five players from the first Slash team to win the Esso Cup in 2017. “This year, we have a lot of new players, so it’s tougher because we don't have as many third years as leaders so that means a lot of second years have to step up so it’s a big role to fill.”

Ross leads the team in points with six assists after recording six goals and 12 points in 30 games in her Slash debut and at the Esso Cup racked up five goals in seven games.

“This year, I would like to be a little more of a leader on the back end because Taylor Anker was the leader last year and somebody kind of needs to fill her role, well nobody can be as good as Anker I know that, but I just want to be just like her and play very good defensively,” Ross said. “And the reason why I’m getting a lot of my points is because I’m passing and I’m working well with the team.”

Ross, 16, hails from Spirit River and after her AFHL bantam elite season with Grande Prairie Storm decided to try out for Slash.

“I was going into my first year of midget and I was looking at the teams and I saw how good the Slash were. Dan was talking to me and I watched some of their games online and I saw how much the coaches had done with them and I wanted to be part of this team because they’re so successful so they must be doing something right,” said the Grade 11 St. Albert High student.

Ross is also among five Slash players on Team Alberta for the U18 nationals Nov. 5 to 9 in Morden and Winkler, Man.

“I always wanted to be on Team Alberta. It’s been my dream every since I was little. I always watched them on TV so just being a part of it is mind-blowing. I still can’t wrap my head around it,” Ross said. “And being from Spirit River I want to represent where I’m from and I know a lot of people back home are cheering for me.”

The Slash will be without Ross, netminder Holly Borrett and forwards’ Jaden Bogden, Natalie Kieser and Brooklyn Schroeder for a few AFHL games during nationals.

“It’s going to be hard. We will be facing adversity, but I think we can all push through and as long as we use our strengths we’ll be fine to get through it,” said Reich, 17.

The third-year Slasher is honoured to wear the captain’s crest for the Esso Cup champions.

“It’s exciting being able to lead the team especially with the name that we have built up for ourselves. It’s exciting to be able to help the girls live up to that and to hopefully bring them to the same place that I’ve been,” Reich said.

The Fort Saskatchewan product gave the Slash a big boost in the stretch drive to the 2019 nationals after missing three months with a shoulder injury that limited her to three goals and 12 points in 19 games and this season has two goals and two assists in seven games.

“I feel I have a strong work ethic and I like to lead by example. I’m not the loudest girl, I just like to do my thing and stay quiet and focus on the game and make sure everybody else around me is upbeat,” said the Grade 12 St. Andre Bessette student.