Sturgeon football team advances to Tier III north final with trip to Alberta Bowl on the line
0
Nov 13, 2019 8:30 AM By: Jeff Hansen 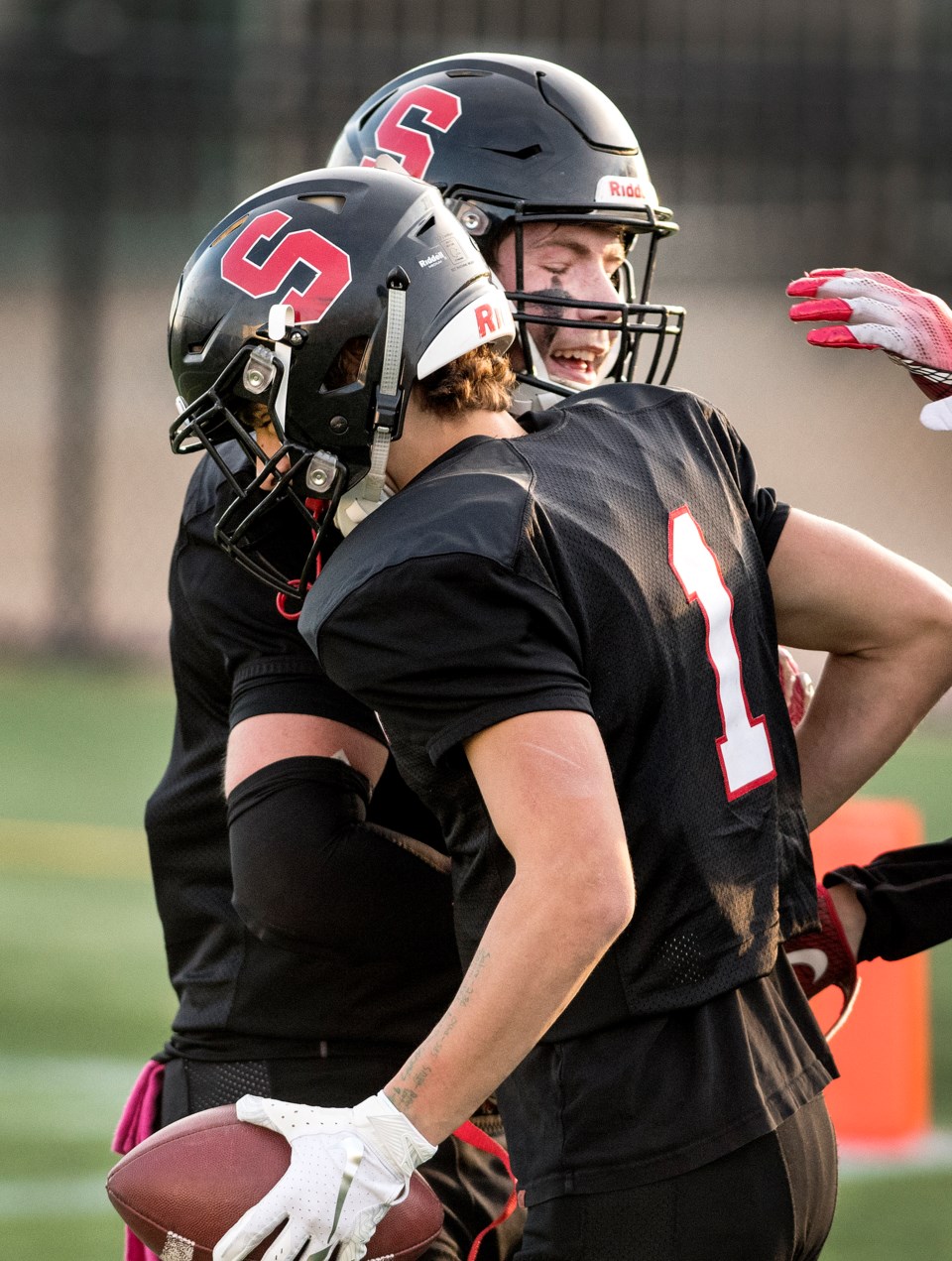 SUPER SPIRITS – Dylan Young, front, and Zach Froese bond together after a touchdown for the Sturgeon Spirits in the metro Edmonton league. Sturgeon, a second-year football team, is 7-2 after Monday's 27-13 win over the host Whitecourt Cats (4-5) of the Mighty Peace league in the Tier III (450 to 749 students) provincial north semifinal. Sturgeon advances to the north final against the Holy Rosary Raiders (8-3) of the Wheatland league and Saturday's kickoff is 12 noon at Lloydminster. The winner advances to the Alberta Bowl Nov. 23 in Raymond. DAN RIEDLHUBER/St. Albert Gazette

The Sturgeon Spirits are one win away from playing for a provincial championship in the second season of the high school’s football program.

The winner will challenge the Cochrane Cobras (8-1) or Crescent Heights Vikings (7-3) of Medicine Hat in the Alberta Bowl next Saturday at 2:30 p.m. in Raymond.

Cochrane is the Tier III champion five years in a row and the last four were against Holy Rosary, the winner of four consecutive north finals against the St. Albert High Skyhawks.

Holy Rosary (8-3) is the Wheatland league finalist while Sturgeon (7-2) is the division two Miles conference semifinalist after losing the division three Gilfillan conference final in its inaugural 5-2 metro Edmonton season.

The north semifinal against the Cats (4-5) of the Mighty Peace league was rescheduled from Saturday because of the travel conditions from the heavy snowfall over the weekend and Graham Acres Field in Whitecourt was “a skating rink,” according to head coach Chad Hill.

“Field conditions were the worst I have witnessed,” said Hill, noting, “The Whitecourt team was an excellent host and provided heated tents and a post-game meal. They are a classy organization.”

Sturgeon opened the game with a six-minute touchdown march while utilizing its new and improved heavy pack in an attempt to maintain some solid footing.

On third and 10, Sturgeon pulled off a fake punt with Kalem Stuermer running for the first down.

Sturgeon continued to “ground and pound” the ball as Stuermer finished off the drive from the two-yard line and Philip McLay kicked the convert.

The Cats “answered the bell with their double wing offence, which is an offence well suited for bad weather and poor conditions,” Hill said, “And they drove the ball down our throats” for the game-tying TD.

Sturgeon was also dealt a double blow in the first quarter with lower body injuries to Stuermer, a defensive standout, and centre Nate Gibbons, but responded in the next quarter as Zach Froese “started to take over the game offensively,”  Hill said.

The Grade 12 quarterback, who signed a letter of intent with the Alberta Golden Bears, hooked up with Will Campbell for a key reception and rattled off some first-down runs before hitting Marc LeBlanc on a 25-yard TD that McLay converted.

The defence, led by rookie Jacob Oliphant at linebacker, made some important stops before a turnover on downs late in the first half led to Froese connecting with Campbell for a 35-yard strike to the two-yard line. With no time on the clock, Froese punched the ball in and McLay’s conversion made it 21-7 at the break.

Hill described the scoreless third quarter as a “defensive battle with both teams grinding it out on the icy ground.”

In the fourth quarter, an “inadvertent whistle” prevented defensive end Karl Haasz from returning a lateral pass into the endzone.

“After the officials' huddle, we ended up with the ball from the original line of scrimmage on our side of midfield,” Hill said.

Froese and Rylan Seewalt picked up first downs carrying the ball before Froese threaded the needle to Kyle Phillips for a 20-yard completion just short of the endzone. On the next play, Froese plunged over the goal line and the convert was blocked.

The Cats answered with a four-minute TD drive to close out the scoring.

The first loss this season for the Paul Kane Blues was the 61-14 blowout by the Lloydminster Barons in the Tier II (750 to 1,249 students) north semifinal.

Head coach Rob Strecker wasn’t thrilled by the playing conditions at Armstrong Field in the Border City after the provincial playoff was moved to Monday from Saturday because of the weekend snowfall and was bemoaning the fact the team wasn’t better equipped to handle the slippery surface.

“I got schooled on footwear. This one is totally on me,” Strecker said. “Not one of their players were wearing cleats, all of them were wearing court shoes, and we were in cleats and couldn’t stand up. We had guys switching to Vans at halftime just to get traction, but by then the game was over (trailing by 47 points).”

“Lloyd is a very, very good football team, but they’re not (47) points better than us,” Strecker said.

The Barons (9-2), last year’s Alberta Bowl champions, repeated as the Wheatland playoff winners while Paul Kane captured the Miles conference title with eight wins without a loss in the metro Edmonton league.

“It was still a fantastic season,” Strecker said.