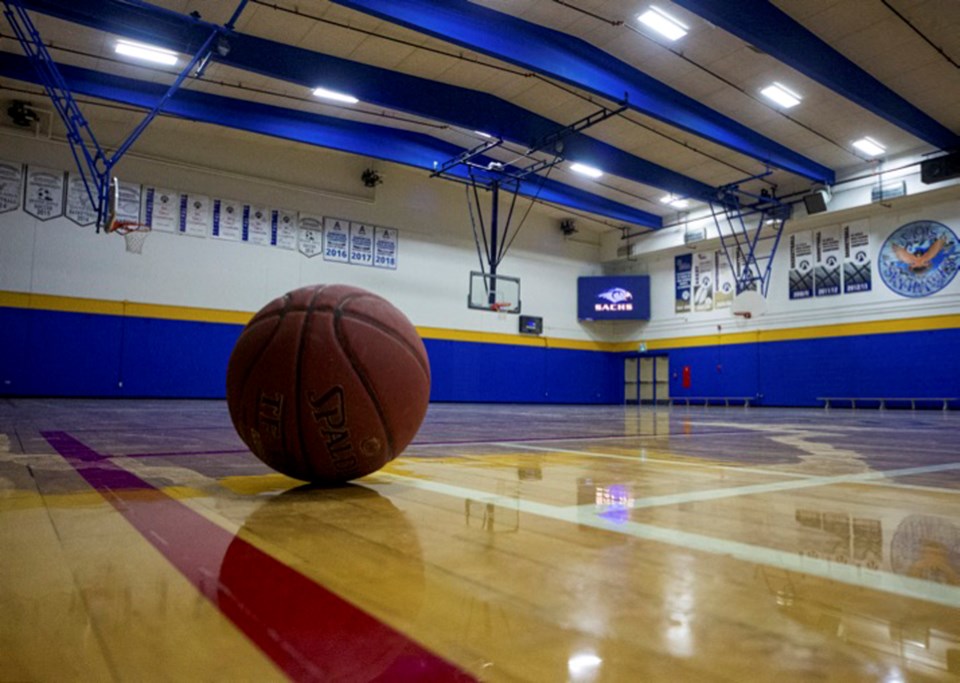 HOOPED – The St. Albert Physical Education Council junior high basketball league Tier I girls' and boys' championships Thursday at the SkyDome were postponed after Alberta Health Services announced that afternoon all gatherings of more than 250 people should be cancelled to limit the spread of COVID-19. The Alberta Schools' Athletic Association also announced Thursday night the postponement of next week's high school basketball championships. The 31-1 St. Albert Skyhawks were among the 16 women's teams to compete at the 4A tournament in Lethbridge and the Sturgeon Spirits were to host the 12-team 3A women's tournament. CHRIS COLBOURNE/St. Albert Gazette

The St. Albert sports scene has been hit hard by the impact of the COVID-19 pandemic.

The Alberta Health Services announcement Thursday afternoon that all gatherings of more than 250 people should be cancelled to limit the spread of coronavirus prompted the postponements and cancellations of several sporting events in the province affecting St. Albert teams and athletes.

National sports governing bodies like Hockey Canada and Curling Canada, in consultation with public health officials, have also been proactive in doing their part in keeping the country safe during this unprecedented period of difficulty in the sports world.

The following is the recent COVID-19 ramifications on St. Albert sports. Additional coverage will appear in Wednesday’s Gazette.

The St. Albert Physical Education Council junior high basketball Tier I championships Thursday were postponed a couple of hours before the opening tipoff at the SkyDome.

The girls’ final between the Richard S. Fowler Falcons (9-1), winners of the last three SAPEC playoff banners, and Sir George Simpson Voyageurs (9-1) was to start at 5:30 p.m., followed by the boys’ final between the Lorne Akins Gators (10-0) and Morinville Wolves (7-3).

The SAPEC basketball championships, as well as the volleyball finals in November, are big events in terms of fan support and competitive spirit by the participants.

“It’s a huge disappointment for our athletes to be unable to participate in the SAPEC city finals,” said SAPEC president Jennifer Willows. “The athletes, of course, are upset for they have worked very hard all season to earn the privilege to be in the final and to be tested to see who will prevail. However, they do understand the gravity of this situation and know that the cancellation of the SAPEC city finals at this time is in everyone’s best interest.

“This virus is bigger than anything we can imagine and the safety if our athletes and community are the first priority. We must be understanding of the will of the province and follow their mandate to ensure the safety of everyone and the desire to try and contain the spread of COVID-19.”

The St. Albert Gymnastics Club (SAGC) postponed its annual Spring Flip Invitational the day before the first of eight competitive sessions was to start Friday afternoon.

The biggest fundraiser of the year for SAGC was to feature 340 athletes, ranging in age from five to 17, from 15 clubs in the J.O. 1 to 10 levels and Aspire.

The fifth annual Marc Kennedy Junior Classic, sponsored by the Co-operators, was cancelled Thursday, a week before the 65-team bonspiel was to rock the St. Albert and Crestwood curling clubs.

“We felt it was the responsible thing to do based on what’s been going on around the world to try and contain the (COVID-19) spread,” Kennedy said. “It’s a big-time bummer. There is a lot of people involved in this and it’s a great event and it's unfortunate that we have to do this, but that’s the case for everyone with every sporting event all over the world right now. Even the world women’s curling championship, all the athletes were there and they were ready to go (this weekend in Prince George, B.C.) and all the scoreboards were up and the ice was done and then they had to pull the plug so that’s a huge financial loss and there was also a lot of people involved in hosting too.

"We’re not alone in this, but it was a decision that had to be made and so far with the response everyone has completely understood. Everybody’s health and safety is way more important than the event so we'll do our part to try and help contain whatever spread there is and just move on and start making some plans for next year.”

This year’s bonspiel had 15 more teams from the original format while adding a fourth day to the tournament.

“The European teams weren’t able to come because any foreign travel was restricted and not recommended,” Kennedy said.

As well, future ASAA championships and events may be postponed or cancelled depending on the advice of the Alberta Health Services and any government agency related directives such as Alberta Education.

The ASAA memo to member schools said, “We again want to state that the health and safety of our membership is our first priority and mitigating the risk of virus transmission between players, coaches, officials, other students, spectators and others has to take precedence over other considerations.”

Earlier in the week, the ASAA had postponed this weekend’s wrestling provincials over the ongoing public health concern.

The basketball provincials were to start next week with the 31-1 St. Albert Skyhawks competing at the 4A women’s tournament in Lethbridge.

“We are absolutely gutted,” said head Paige Bontus of the metro Edmonton division one champions three years in a row and 2019 provincial gold medallists.

“The team has been looking forward to defending their 4A title since the first day we stepped back on the court. They are such a committed and focused group. We have spent countless hours in the gym in preparation, as have other teams, so it's hard to take in,” Bontus said. “That being said, we do understand that there are some things bigger than basketball and health is one of them. Prevention is key right now so we recognize the need to put provincials on hold and our hope is that down the road we get a chance to play. In the end, that's all the athletes truly want, whatever that looks like (with less teams and/or later date).

“This group and these (three Grade 12) seniors are special and they won't have this same opportunity again. They deserve a shot at the banner, so I hope a decision is made to let them play.”

The St. Albert Soccer Association had six teams consisting of about 120 athletes qualify for provincials.

“While we understand that this decision may be disappointing to many members, we ultimately decided that the many uncontrollable factors considered pose too much of a risk to the health and safety of Alberta Soccer stakeholders and all Albertans,” Alberta Soccer said in press release.

Dan Holowaychuk of St. Albert was gearing up for his fifth senior (50-plus) nationals with Team Alberta when Curling Canada indefinitely postponed next week’s competition in Portage la Prairie, Man.

“Definitely bummed out about the whole situation. It's very unfortunate, but I guess things could be worse. We could have the virus,” said Holowaychuk, the second for the Wade White rink of Lac La Biche, with Barry Chwedoruk at third and George White at lead, as winners of a record-setting fourth consecutive provincials in the 50-plus age division.

“It’s unfortunate. I don’t think it’s going to be happening this year. Our season is pretty much done in that regard,” Holowaychuk said. “Curling is a little bit different than for example the Oilers. If it only happens to be a month or something like that they can finish off their schedule and still have playoffs. With us, just getting the volunteers and the whole thing organized and having a small window for it, I don’t see it really being able to play out.

"It could be one of those years where there is going to be an asterisk to everything with the coronavirus: no Canadians, no worlds.”

“This decision was not taken lightly, but the health and well being of our athletes, volunteers, spectators and officials remains the top priority,” Curling Canada CEO Katherine Henderson said in a press release.

“As a team, we were talking about it actually even before we got the notice and we were surprised it didn’t come even earlier than it did,” Holowaychuk said.

The winner of the March 22 senior national final was to represent Canada at the 2021 worlds.

“We know that we can win it, we’ve done it before, but every year we get one year older and they get a younger batch in there so it doesn’t get any easier that’s for sure,” said Holowaychuk, 57, a bronze medallist at his first senior nationals in 2013 with White as skip, third Doug McLennan of St. Albert and lead George Parsons.