St. Albert curler Abby Marks is headed to her second U21 nationals after repeating at provincials
0
Jan 11, 2020 9:00 AM By: Jeff Hansen 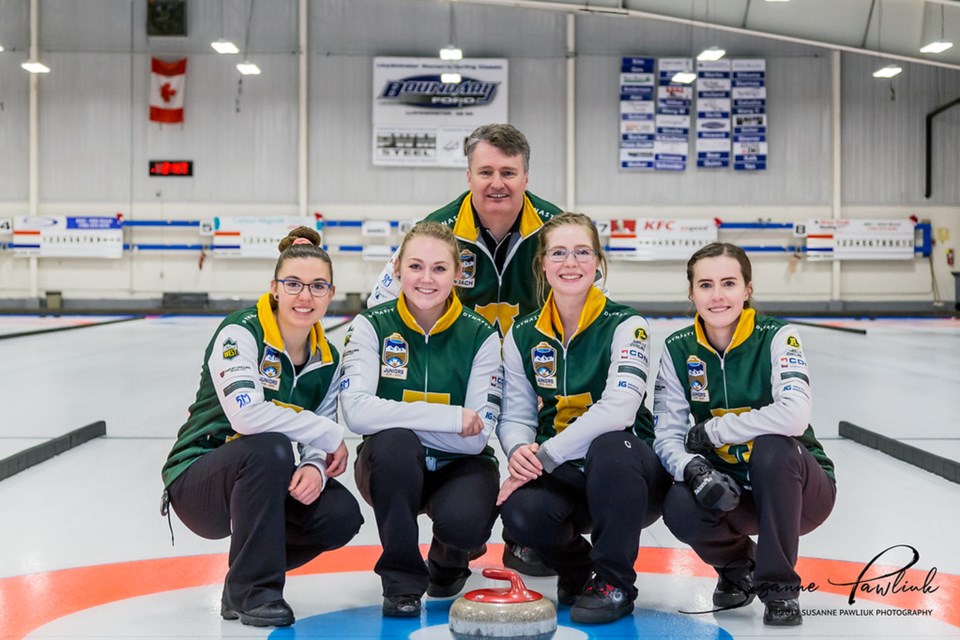 PROVINCIAL CHAMPIONS – The University of Alberta Pandas' rink of, from right, skip Abby Marks of St. Albert, third Catherine Clifford, second Paige Papley and lead Jamie Scott, along with coach Doug Marks, qualified for the U21 nationals, Jan. 18 to 26 in Langley, B.C., after going 7-2 at provincials in Lloydminster. Last year Marks was the third and Papley was the lead for Selena Sturmay's provincial championship team that went 11-0 at nationals and 7-4 at worlds as silver medallists. SUSANNE PAWLIUK PHOTOGRAPHY

Abby Marks is going out with a bang as a junior curler.

The St. Albert skip repeated at the U21 provincials in her final season of eligibility.

“It’s really exciting. I want to make the most of my last year, play well and see how it goes,” Marks said. “There’s definitely more energy and focus for your last year.”

Also winding up their junior careers with Marks are third Catherine Clifford, second Paige Papley and lead Jamie Scott with Team Alberta at nationals starting next weekend in Langley, B.C.

Alberta is the defending Canadian champion as Marks at third, skip Selena Sturmay, second Kate Goodhelpsen and Papley at lead became the seventh team to go undefeated in the competition.

“I’m beyond excited to represent Alberta and experience nationals with this new team,” Marks said. “We’re going to take it one game at a time and put the expectations on ourselves that we want to play well and represent Alberta well.”

It’s also the third nationals for the 20-year-old Marks and the second as skip as her Alberta lineup of Papley, Scott and Brittany Brezinski placed fifth at the inaugural U18 Optimist championship in 2017 at Moncton, N.B.

“Experience never hurts. It will probably help us with three of the four of us having been to a nationals before. It makes things a little bit more calmer going in,” said Marks of grinding through a 14-team, nine-day bonspiel. “It’s important to give yourself time to relax throughout the week and not just think about curling when you’re away from the rink, but when you do get to the rink you have to be focused and expect to play well.”

Team Alberta finished 11-0 at the 2019 nationals in Prince Albert, Sask., and the final was 9-6 in nine ends over Sarah Daniels of Delta, B.C.

“We tried to take it one game at a time and the final obviously had more pressure,” said Marks, who curled 72 per cent in the final and the team’s overall average was 77 per cent.

Worlds are Feb. 15 to 22 in Krasnoyarsk, Russia, after they were hosted last year in Liverpool, N.S.

“It was so exciting to wear the Maple Leaf in Canada. It was great,” Marks said.

Canada finished 7-4 after losing the gold-medal game 8-7 in an extra end to Vlada Rumiantseva of Russia. A three-ender in nine made it 7-5 for Canada and Russia replied with a deuce in 10. The final was decided on Sturmay’s last shot as the draw attempt slid too far for a steal of one.

“It was pretty heartbreaking honestly for all of us to be so close and not quite go all the way and win it for Canada,” said Marks, who was marked at 83 per cent in the game and Canada was 76 per cent as a team while Russia was 75 per cent.

The return trip to worlds started with provincials as the University of Alberta Pandas on the Alberta Junior Curling Tour successful defended their U21 championship.

“Both meant a lot, but this one is a little bit more special,” said Marks, a nutrition and food science student who graduated from Ecole Secondaire Sainte Marguerite d’Youville.

The seventh win in nine games at provincials in Lloydminster was 6-4 against Zoe Cinnamon of Airdrie in Sunday’s final. A deuce in nine gave Marks the 5-4 advantage and a steal of one in 10 closed it out.

“We played our game and played it well,” Marks said. “Team Cinnamon, they’re all every good curlers and they played extremely well against us.”

Marks, Cinnamon and Claire Booth of Red Deer shared top spot in the eight-team round robin at 5-2.

The first game for Mark was 6-5 against Cinnamon and the losses were 7-5 against Hollie Vincent (4-3) of Red Deer and 6-5 to Booth. Marks let a 5-1 lead after five ends slip away against Vincent and a deuce in 10 by Booth sealed the fate for the Saville Centre-based rink.

The turning point in the 8-4 semifinal against Booth was the three-ender in five to lead 5-2.

“The competition in Alberta is so good so I'm very proud to see the way my team played last week,” Marks said. “We put a lot of time and effort into it.

“We did a really good job at forcing the other team to make hard shots,” Marks added. ”We kind of put direct pressure on the other team.”

As for the rink's strength, “We’re definitely a hard hitting team, but we’ve worked really hard this season in particular to make our finesse shots better,” Marks said.

After nationals, the Pandas’ foursome will compete at the Canada West championship, Jan. 31 to Feb. 2 at the Saville Centre for a berth at the Curling Canada/U SPORTS Canadian University Championship, March 11 to 15 at Portage la Prairie, Man.

Last year’s Pandas placed fifth at the U SPORTS tournament in Fredericton, N.B.