Winning season for Valkyries despite loss 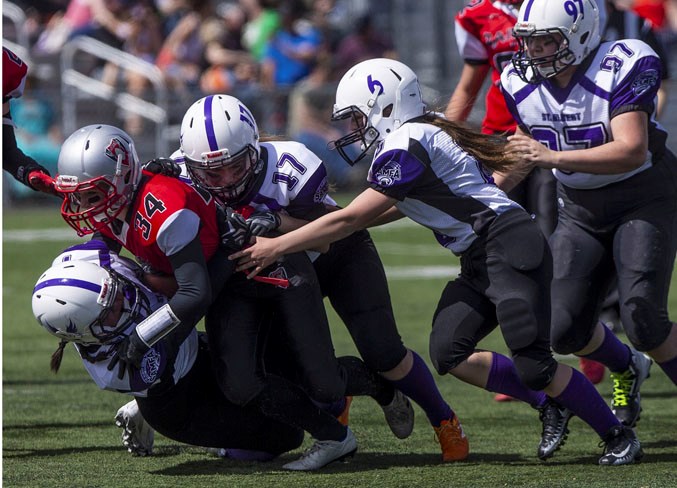 The St. Albert Valkyries shed more tears over the season ending than losing Saturday’s final to the West Edmonton Raiders.

“There are a lot of positives that come from placing second in the inaugural season. Positives that go beyond the field and scoreboard. Having the largest roster in the league, having several players commit to playing high school football in the fall and friendships forged are all points of pride from the year regardless of the score of the final game,” Patrick said.

There was no quit in the Valkyries after fumbling on the first play and the Raiders scoring on their first play of the final at Larry Olexiuk Field.

“The team continued to work harder and didn’t quit. We lost the game but at halftime we vowed to win the second half and our toughness and effort led us to accomplish that,” Patrick said.

“We started the season with a lot to prove and (Friday) prior to the game the message was, ‘One thing left to prove.’ It was a call for our team to prove to themselves that they will always work harder than anyone else and never quit and I think we saw that,” Patrick said.

The four-team league consisted of student athletes in Grade 9, 10 and 11. Games were played with 30-minute halfs of running time with the field divided for two games at once and every offensive drive started at the 45-yard line

THIRD DOWN: The Valkyries’ team windup May 25 will include the presentation of the offensive and defensive player of the year awards.

Chaabane, whose brother Addison plays for Sturgeon, joins Julia Baniak and Althea Savoie with the St. Albert High Skyhawks, the 2018 division two Miles conference finalists and Tier III provincial north runners up as Valkyries taking the next big step in their football careers.