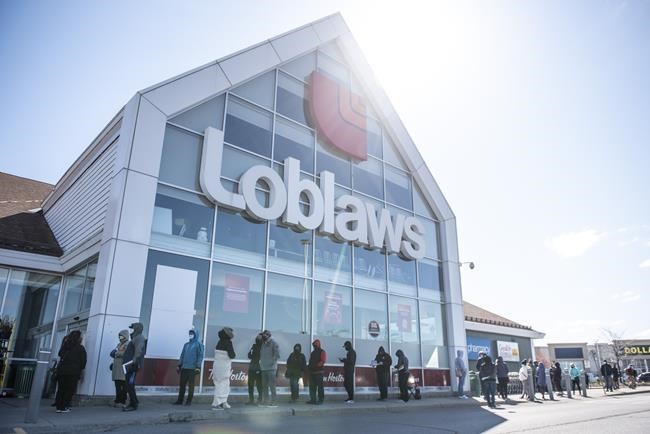 The Ontario government has asked for military relief to help handle a rising COVID-19 crisis in its hospitals as several other provinces tightened health restrictions Monday to avoid a similar fate.

A spokesman for Ontario Solicitor General Sylvia Jones said the province has been working with Ottawa to develop a plan to use whatever federal help might be available.

"We have been working with the federal government to identify health human resources located across various federal agencies who might be suitable for deployment to assist with the critical care surge in Ontario," Stephen Warner said in a statement.

The statement noted that many of the resources needed are found "within the Canadian Armed Forces and Canadian Red Cross organizations."

The federal government said the Armed Forces are preparing to deploy up to three multi-purpose medical assistance teams of nurses and medical technicians to hospitals and other facilities — similar to the teams that were went to long-term care facilities in Ontario and Quebec last spring as the first wave of COVID-19 swept across the country.

Reconnaissance teams were expected to hit the ground on Tuesday to start assessing the specific needs as the two levels of government worked out the final details.

Ontario has been struggling with a deadly third wave of the pandemic that has seen the number of patients in intensive care surge.

The Ministry of Health reported that 2,271 people were in hospital with COVID-19 on Monday, including 877 people in intensive care and 605 on ventilators. Officials said the real number of hospitalizations is likely higher because some facilities don't submit data on weekends.

Several other provinces imposed new public health restrictions on Monday in response to their own COVID-19 challenges.

Nova Scotia announced it was closing Halifax-area schools to in-person learning for two weeks after the province reported a single-day record for new COVID-19 cases for the second day in a row. Premier Iain Rankin said the decision would allow exposed students and staff to isolate and slow down community spread.

"COVID is back and it wants to stay," he said.

The measure came a day after Rankin tightened rules for travel and gatherings and doubled fines for those who violate public health orders.

As of Wednesday, Manitobans will not be allowed to have any visitors at their homes, either indoors or outdoors, with some exceptions for people who live alone, the provincial government announced. Attendance at religious services and retail store capacity will also be lowered, Premier Brian Pallister announced.

In Alberta, councillors for the Wood Buffalo Regional Municipality voted on Sunday to declare a state of local emergency to curb rising cases of COVID-19. The measure, which was enacted Monday afternoon, will support future council actions that "could include enhanced measures to curb the COVID-19 emergency within the region," council said in a statement.

Two school divisions in Fort McMurray, part of the Wood Buffalo region, had earlier announced their schools were closing to in-person learning until May 10.

Even as dire situations unfolded across the country, Canada's chief public health officer provided a glimmer of hope. Dr. Theresa Tam said that the virus' reproduction rate, known as Rt, has finally dropped below one, suggesting the spread of the virus is slowing.

"This means that for the first time in many weeks, the epidemic has dropped out of a growth pattern, primarily driven by recent declines in epidemic growth in British Columbia, Ontario and Quebec," she said in a statement, adding that the rate is still high in other parts of the country.

Quebec, meanwhile, reported fewer than 1,000 new cases for the first time in weeks, even as Health Minister Christian Dube expressed concern over a slight rise in hospital numbers and urged Quebecers not to become complacent.

Even with case counts declining in some places, the death of a 13-year-old Ontario girl provided a reminder of the dangers of the pandemic. Tributes poured in on Monday for Emily Viegas, who died of COVID-19 last Thursday after her father, an essential worker, tried to care for her in the family apartment in Brampton, west of Toronto.

Several provinces were also expanding their vaccination programs on Monday to target populations perceived to be most at risk.

Alberta said it would vaccinate meat plant workers, while Manitoba said adults of all ages in the northern health region and in Winnipeg's Seven Oaks West neighbourhood can now get a shot.

In Ontario, officials said they were looking at allowing some pharmacies to administer the Pfizer-BioNTech COVID-19 vaccine. The province is also considering allocating half its COVID-19 vaccines to hot spots rather than taking an approach based mostly on age.

Quebec on Monday began a workplace vaccination program in which large businesses turn their facilities into mass vaccination sites to serve their employees, workers' families, and eventually the wider community.

British Columbia, meanwhile, said the death of an infant who was being treated in hospital in January was related to COVID-19.

Provincial health officer Dr. Bonnie Henry said the B.C. Coroners' Service determined COVID-19 was a factor in the baby's death as it investigates whether the illness played a role in any unexpected deaths.

"We've had several hundred deaths that have been investigation by the coroners' office since March of last year and a very small number of them have been determined to be due to or related to COVID-19."

This report by The Canadian Press was first published April 26, 2021.