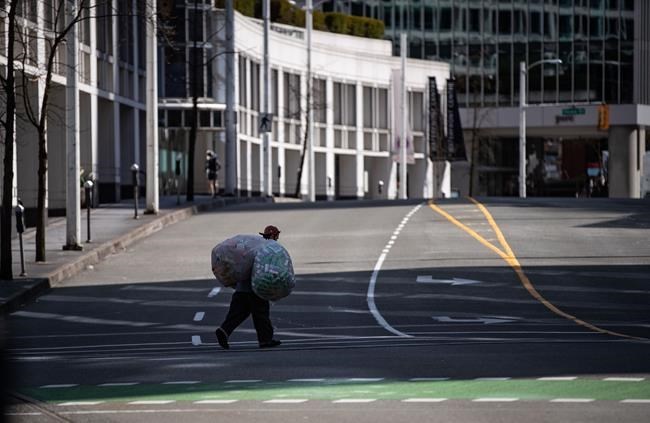 OTTAWA — Gaps in Canada's data collection means the country could be unable to see which groups are most affected by COVID-19, researchers warn.

There are questions about whether low-income workers are at greater risk of exposure because they are more likely to keep showing up to work, and whether black or Indigenous Peoples are disproportionately contracting and dying from the respiratory disease.

These are questions that are difficult to answer without more detailed data, according to Katherine Scott, a senior economist with Canadian Centre for Policy Alternatives.

"It's critical to get a window or snapshot into how this is developing in real time," she said.

A handful of states and major cities in the United States that have collected such detailed data have shown COVID-19 is striking black communities particularly hard, for example.

In Michigan, 33 per cent of overall cases were black or African-American patients, as were 40 per cent of the state's deaths related to COVID-19. Black people make up only 14 per cent of Michigan's population.

In Louisiana, Gov. John Bel Edwards said slightly more than 70 per cent of COVID-19 deaths were African-Americans, though they represent only about 32 per cent of the population.

Similar patterns are playing out in New York, Las Vegas, Illinois, Connecticut and the Carolinas.

"This is not an equal opportunity pandemic," Scott said.

She said disparities likely exist in Canada too — we just can't measure them yet.

"Marginalized communities will be disproportionately impacted," she said.

They could include women, racial minorities, people living with disabilities and those earning lower levels of income.

Social inequalities will always play a role in times of social crisis, said Rachel Zellars, an assistant professor in the department of social justice and community studies at Saint Mary's University in Halifax.

People in the service industry have found themselves on the front lines and at higher risk of exposure, for example.

Then there are issues with bias when it comes to relief aid and health care, she said.

She said she was intuitively aware that the black community would be disproportionately affected by COVID-19 when it came to their health and incomes, so Zellars started a fundraiser to provide relief for black Nova Scotians.

"The need is tremendous," she said.

She said detailed data to back up what she's seeing on the ground is vital.

"The data is absolutely essential," Zellars said. "We know that key decision makers … will not move to address structural inequalities without the data to back it up."

"When we do engage in race-based studies … we find without a doubt time and time again the same disproportions based on race that happen south of the border," Zellars said.

Canada's chief public health officer, Dr. Theresa Tam, said Canada is collecting detailed data and it's released daily on the government's website. But the government data only includes details about the age and gender of patients with COVID-19.

"We do know that certain groups have quite a lot of impacts in terms of severity and death, and those are people are in the older age groups," Tam said at briefing on Tuesday.

More detailed data is coming, but hospitals have so far focused their efforts on collecting basic counts, said Dr. Doug Manuel, a senior scientist with the clinical epidemiology program at the Ottawa Hospital Research Institute.

He said hospitals have been working to get their data systems online since the early stages of the pandemic, starting with basic information about who is most at risk. After that, the focus shifts to other medical factors contributing to the worst outcomes.

"What about those young people who are having bad outcomes. Can we identify who those are?" he said.

But getting more detailed information about who these patients are and how they live will be important for making social policy, he said.

One of the groups he's concerned about is intergenerational households where older, at-risk people live with younger relatives.

At the Ottawa Hospital, he expects to that data to start becoming available within "days or weeks," not months, but said it may vary from hospital to hospital and province to province.

This report by The Canadian Press was first published April 8, 2020.

Haddad back on ballot for Greens after pointing out party hypocrisy
Sep 24, 2020 4:33 PM