Indigenous Peoples in U.S. stand with BLM, but await their own reckoning 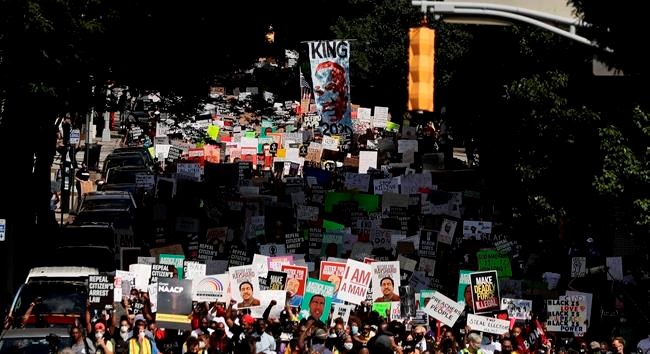 WASHINGTON — As demand for social change sweeps across the globe, Indigenous Peoples in both Canada and the United States are backing the Black Lives Matter movement in more ways than one: standing in solidarity, but also standing in line, waiting for their chance at lasting justice.

Both countries are awash in tidal waves of public anger over systemic racism and police brutality — but while the protests in the U.S. revolve around incidents of police brutality against the Black community, the Canadian version has also focused on Indigenous Peoples.

It's a stark illustration of how Indigenous issues play on either side of the Canada-U.S. border. In Canada, they sit at the core of the ongoing debate over institutional racism, police brutality and social justice.

In the U.S., where terms like "American Indian" and "native" are still very much in vogue, they barely register.

"What you're seeing in Canada, where there's a disproportionate level of police misconduct in relationship to native people, is also happening in the States," said Circe Sturm, an anthropology professor at the University of Texas, Austin and a specialist in Indigenous issues.

And yet research shows that Indigenous people are even more likely than Black people to be killed at the hands of police, making them the most vulnerable demographic when it comes to law enforcement violence, Sturm said.

The Centers for Disease Control and Prevention, which tracks violent deaths, found that with data from 36 participating states, Indigenous people died at the hands of police at a rate of 0.98 for every 100,000 people in 2017, while the same database produced a rate for Black people of 0.46.

In terms of raw numbers, there are far more cases of Black people being killed in police encounters in the U.S. than Indigenous people — 437 compared with just 17 in 2019, according to the online database Fatal Encounters. But factor in the difference in the size of their respective populations and the disparity becomes clear.

Hispanic Americans, too, suffer an outsized measure of violence from law enforcement. But Indigenous people can often appear to fall into any of the three most vulnerable categories, Sturm said.

"So when people physically look to be in any of these categories, then they tend to get targeted more because of racial profiling."

In the U.S., two dramatic police killings — George Floyd last month, under the knee of a former Minneapolis police officer, and then Friday's shooting death of Rayshard Brooks as he tried to flee Atlanta cops in a Wendy's parking lot — have galvanized an uprising across the country, marked by daily protests, the toppling of Confederate symbols and talk of swift police reform.

That tide of outrage reached north as well, but a different cast of characters soon took centre stage.

Just eight days earlier, 26-year-old Chantel Moore, from the Tla-o-qui-aht First Nation in British Columbia, was shot by police in Edmunston, N.B. The municipal police department said an officer performing a wellness check allegedly encountered a woman with a knife.

And dashcam footage of Athabasca Chipewyan First Nations Chief Allan Adam's brutal arrest by RCMP officers outside a casino in Fort McMurray, Alta., allegedly for having an expired vehicle registration, has been circulating on social media and stoking anger across the country for nearly a week.

RCMP Commissioner Brenda Lucki has been facing calls for her ouster after she initially stopped short last week of agreeing with Prime Minister Justin Trudeau's declaration that systemic racism is a problem inside the ranks of the force.

She later recanted: "I did not say definitively that systemic racism exists in the RCMP," she said. "I should have."

The National Congress of American Indians, the largest Indigenous organization in the U.S., issued a statement Tuesday calling on its members to continue to show solidarity with the Black Lives Matter movement and to seize the opportunity for lasting change.

"America's greatness has always risen and fallen on the degree to which this nation embraces its incredible diversity and provides equal footing to all Americans to seize opportunities, enabling them to realize their full potential," the organization said.

"As the first peoples of this land, native people are an integral part of the American mosaic, and we will not rest until we secure our rightful place in this country’s future and equal opportunities to thrive."

This report by The Canadian Press was first published June 16, 2020.